As Ganbare Goemon is a series with Loads and Loads of Characters across different media, this list will be limited to those who appear most often. 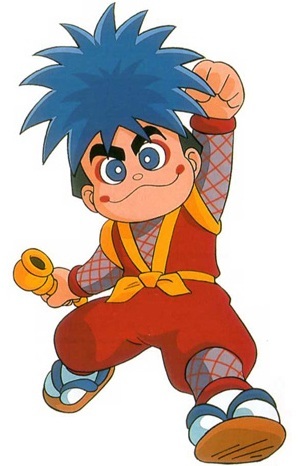 Our hero, the eponymous Mystical Ninja. A bred-in-the-bone Edoite who fights evil with his family's kiseru. His hot temper often gets him into hot water. 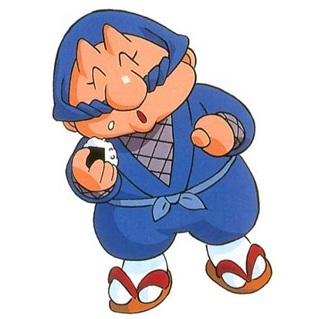 Goemon's eccentric best friend who'd rather eat and loaf about than do battle. He likes to call himself "The Ninja of Justice." 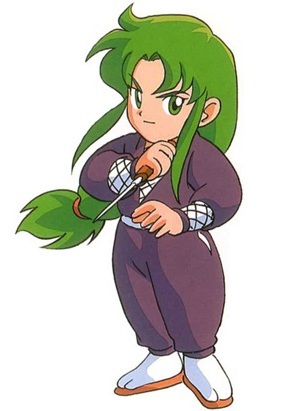 A member of a group of secret ninja agents who investigate strange happenings. She's like a big sister to Goemon and the others. 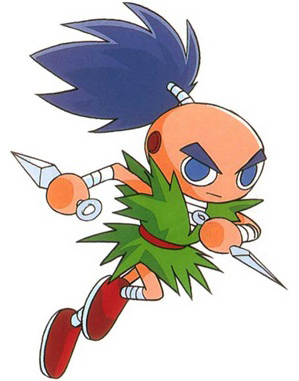 A giant robot with an affable personality and dreams of stardom. Originally thought to be made by Wiseman, he is actually an alien.

Goemon's neighbor and sweetheart, a teahouse waitress with a reputation as a beauty idol. She provides support from the sidelines whenever she isn't getting kidnapped.

A brilliant inventor from Iga and a close ally of the Goemon gang. Unfortunately, his perversions tend to cloud his judgement.

A ninja cat who is both Princess Yuki's pet and bodyguard. He has the ability to turn into a plate-spinning ghost woman, for whatever reason.

Edo Castle's happy-go-lucky ruler, who doesn't seem to do much ruling. Nevertheless, he cares deeply about his people.

The beloved princess of Edo Castle. She has a calm and quiet demeanor, but don't rub her the wrong way...

A recurring villain notable for his habit of coming back from the dead. His burning desire for revenge is what motivates him.

A hooded, barely-clothed, vaguely draconic fortune teller with an obvious Verbal Tic. Come to his place for the hints, stay for the atmosphere.

An aquatic robot known as "The Charming Mermaid." He takes on a handful of different forms (a few of them gigantic), and speaks his own incomprehensible language.