All the different interesting characters in Furi.

Perhaps needless to say, given how obscured much of the story is for most of the game, but unmarked spoilers are plentiful.

The Stranger/ The Rider

"You were a weapon, a bringer of death. And now, you're nothing."
—The Chain 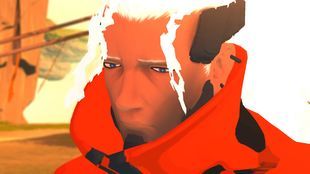 The Player Character. A nameless man and "bringer of death", imprisoned by the Guardians. The Voice frees him from his prison at the start of the game and he fights his way to freedom. He is, in actuality, a scout for an alien invasion of the planet to harvest its resources, and him returning to the ship at the end of the game jumpstarts the destruction of the planet, something he can either let happen or interrupt.

The Voice/ The Architect

"The Architect gave up, and The Father made a plan."
—The Voice 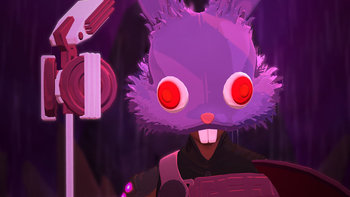 A mysterious man wearing a rabbit mask who helps The Stranger escape. He knows much about The Prison and the Guardians, and seems to be using The Stranger to further his own agenda. 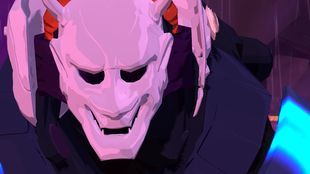 The Jailer directly responsible for guarding The Stranger. A three-faced man who serves as the tutorial boss of the game.

"But you and me, we both know that being locked up fucks you up inside. We know that so well..."
— The Voice 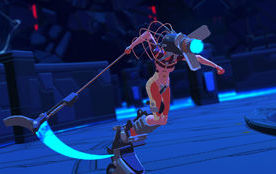 A wild woman who showed up one day, searching for something and destroying everything in her way, before getting imprisoned into a cell that would just keep growing back around her as she tried to tear it down, driving her totally insane. She serves as the second "jailer" in the sense that she's in the way.

"Time is a picture in motion through eternity."
— The Line 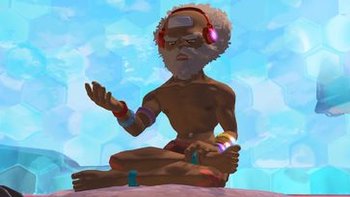 An old man with some amount of power over time. He serves as the third boss, and seems to know more about the Stranger than anybody else. 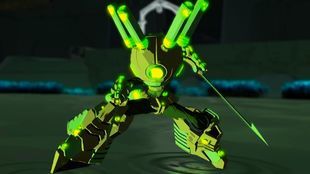 A man wearing a diving suit, who was contaminated by an unknown catastrophe. The Voice says that most of what he says is crazy babble, so all that talk about vengeance on the Stranger is surely nothing more than nonsense, right?

"I look at you, Stranger, and I see nothing. Desolation. Death. You are alone."
— The Hand 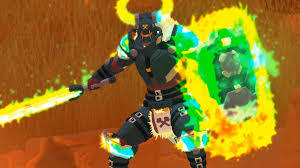 A Knight, and the one who imprisoned the Stranger. He fights to protect his son, and lectures The Stranger for having nothing to fight for.

"If you go any further, I have no other choice and you, even less than me."
— The Song 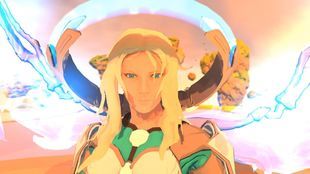 A woman who uses energy wings and is not initially hostile to the Stranger, offering to let him stay in her section of the prison where she'll look after him. The Voice says she's messing with his head, however. 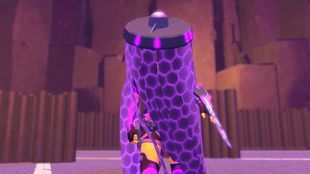 A playful woman who delights in planning every single thing and hunting down somebody to perfection. She's watched all the other fights the Stranger has had, and even does a total scan of him in order to have every advantage possible against him.

"Excellence is not an art, it's pure habit. We are what we repeatedly do."
— The Edge 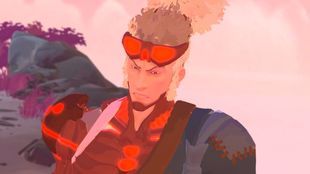 A samurai, and the eighth guardian. Obsessed with fighting The Stranger, ostensibly to prove his mastery of his art and fulfill his destiny.

"I wanted to be here. Where else would I be? Here is where I can make a difference."
— The Beat 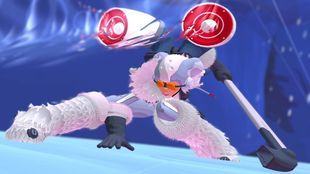 A young girl, and the final Jailer. She comes across as an idealistic, somewhat naive girl. The Voice is disgusted that such a young girl is the final Jailer, though he warns that while she may be an amateur, she is still dangerous.

"For Seta, For Emon, For Dimès. For the ones who fell."
— The Flame 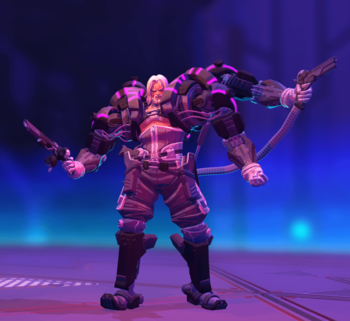 A man with multiple robotic arms who guards the tower that stores the Rider's armor. He was added to the game in One More Fight as a new opponent, and he certainly took that time to prepare.

"Welcome back, Rider. Let's see your report on your target planet."
— The Star 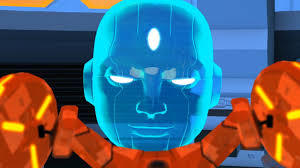 The AI controlling the mothership the Stranger was sent from, serving as an optional True Final Boss should the Stranger rebel against them. 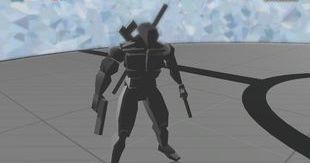 A grey, mannequin-like being. The second Bonus Boss introduced in One More Fight, unlocked after defeating The Flame. Has no part in the story.