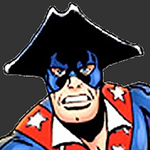 An aging Nuclear physicist who helped create the Atom Bomb. He gets shot when he observes another scientist selling secrets to the Obviously Evil Sukhov. In his dying moments he touches an Energy X infused statue and is revived as... THE MINUTEMAN! 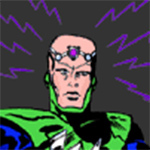 "For the good of all"

A former advisor to Lord Dominion. However, when he learned of his master's plan for Earth, he fled with Energy X in order to gift it to the best of humanity so they may stand up to the Domain. He then takes it upon himself to guide Earth's heroes as... MENTOR! 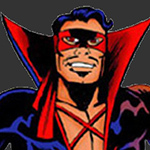 A former petty criminal that was nearly killed in neighbourhood gang warfare. When he gains his power, he learns the true scope and beauty of the world and reforms as the fiery and passionate... EL DIABLO! 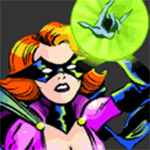 The prettiest girl on campus, she was disdainful of her roommate's Wiccan beliefs. But one night, her roommate's mysterious statue talks to her and gives her great powers, and instructs her to fight evil as... THE ALCHEMISS! 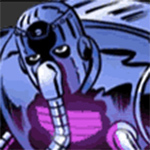 Millionaire Playboy who is struck with Energy X. He goes to his scientist brother for help when he begins to create Energy X uncontrollably, but then refuses the Powered Armor he is offered. Another blast of energy then kills his brother and destroys his lab. In penance for this, he dons the armour and becomes... THE MAN-BOT! 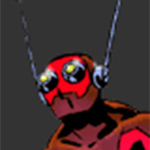 "You called for an ant?"

Bullied high school nerd who loves ants. One day, he's infused with the powers of the ants and then prevents his bullies from committing a far more serious crime. From then on he's dedicated to fighting crime as...THE ANT! 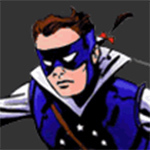 "I'm itching for a tussle"

The young president of Minuteman's fan club is injured by Pinstripe while watching Freedom Force in action. A blood transfusion from his idol saves him in time, and so he decides to don a costume and aid his saviours as... LIBERTY LAD! 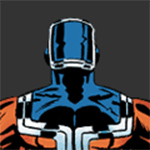 A deadly human hunting machine from the future possibly sent back to destroy Earth's mightiest protectors, Freedom Force themselves! Once neutralized, Mentor is able to realign the robotic rapscallion to the greater good as...MICROWAVE! 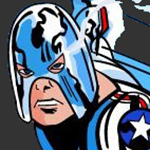 An ace pilot who loves speed. After his plane was shot down, he discovered he could outrun bullets and move fast enough to create whirlwinds. Though he opts for a quiet life back in Patriot City, Minuteman soons convinces him to become...BULLET! 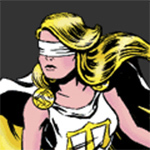 A judge's assistant who becomes the target of hitmen when she agrees to testify in a murder case. Though under heavy attack, she recieves the blessing of Energy X and becomes... LAW! 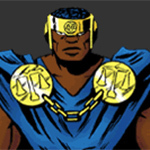 An honest policeman assigned to watch over the woman who would later become Law. In their most desperate hour, he is transformed into... ORDER! 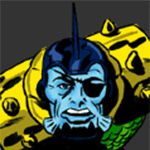 "Do you really want a row with one who can control the very water itself?"

Hank Waters was a down on his luck fisherman about to pack in the business. That is, until he discovered a stowaway on his boat and hit a storm. After the ordeal he found himself transformed into... MAN O'WAR! 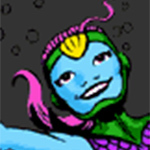 A young stowaway on Hank Water's ship. When a storm hits, she becomes the bubbly and eager...SEA URCHIN! 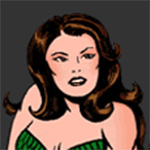 A mysterious woman who appeared one day in Patriot Park. She can commune with nature, but none know her true identity. To the world she is known only as... EVE! 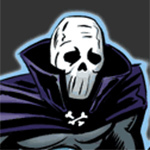 "I am judge and jury"

Nathan Graves is a devoted husband, framed for his wife's murder by his slimy next door neighbour. Energy X strikes him at the moment of his execution. Nathan Graves dies, but in his place rises... TOMBSTONE! 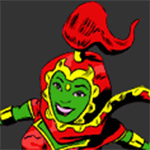 "Have a little Genie"

The rebellious daughter of an Arabian businessman who is granted the gift of Energy X shortly before an unwanted marriage. She enacts revenge upon her cruel father and escpaes to aid those less fortunate as...THE GREEN GENIE! 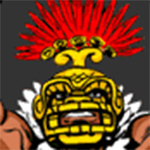 When a young boy's wilful ignorance or his proud heritage causes the death of his grandfather, the spirit of a God bonds with him to restore his grandfather to life and to protect the world as... QUETZALCOATL! 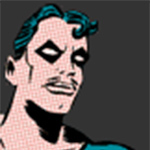 Jack Spade was all too eager to go to war, but his mentor kept him safely away from the front lines. Upon witnessing the power of Blitzkrieg, he resolves to aid the war effort as... BLACKJACK! 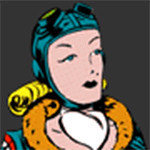 An Olympic fencer whose skill caught the attention of the odorous Blitzkrieg. He brainwashed her into being an agent of Nazi Germany, but when the sight of the French flag restores her self control and patriotism, she seeks to atone for her acts as...TRICOLOUR! 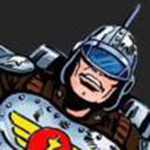 A movie star who wanted to help fight the good fight. When his modifications to his suit paid off as he apprehended a German spy, he decided to go to Europe, to make known the legend of...THE SKY KING!

Voiced by: Terri Brosius
A former burglar, she recieved her powers in prison and decided to reform as...THE BLACKBIRD!

A former boxing champion who was exposed to Energy X and became...IRON OX!

A mysterious ally. Is he a robot, a human, an alien? Is he from mankind's past, or its distant future? All we know is, he is...THE SUPERCOLLIDER!

Harry Holmes, a William Shakespeare fanboy who recently lost the love of his life. Throwing away his lute in frustration, he inadvertently ruptured an Energy X container and became imbued with the power of the muse, thereby transforming him into...THE BARD! 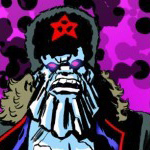 "Sorry for the frosty reception"

When Russian secret agent Sukhov was being chased by the newly transformed Minuteman and his ally Mentor, he was frozen in liquid nitrogen. This interacted with the tiny dose of Energy X within his body to create...NUCLEAR WINTER! 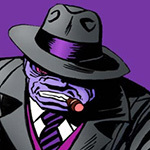 "Come and get me do-gooders"

A mafia boss made all the more daunting by Energy X. He rules the criminals of Patriot City as...PINSTRIPE!

A former model who recieved a small scar to her cheek. Seeing herself as now warped and ugly, she decided to make the entire world so. She creates an underground kingdom which she rules over as... THE SHADOW!

Voiced by: Dorian Hart
"You won't be smiling anymore | when you see what I have in store"

A schizophrenic who escaped from a sanitarium with the aid of his new powers. Able to duplicate himself and others, Freedom Force soon know the power of...DEJA VU!

Voiced by: Alexx Kay
"Time to watch a real architect at work"

A failed architect who was laughed out of town. With his ambition of revenge fueled by Timemaster, he intends to create a monument to destruction through the steel legions of...MR MECHANICAL!

Voiced by: Stephen Russell
A God from another dimension. He attempts to lure innocent women to become his servants, and Eve is the prize of that collection. Freedom Force must somehow contend with the otherworldly power of...PAN!

The right hand man of Lord Dominion, he leads the forces of the Domain into battle as...PRAETOR!

Ruler of the Domain, he controls all of time and space except for Earth. He unleashes Energy X upon the most evil and twisted of its inhabitants to watch the planet tear itself apart. This leads to the birth of Freedom Force, a constant thorn in the side of...LORD DOMINION!

Voiced by: Stephen Russell
"In my domain I have all the power"

He who controls all of time yet is still bound to it by the chains of his own mortality. It is his goal to conquer death by destroying everything but him, leaving only...TIMEMASTER!

Voiced by: Olga Bell
A Russian witch who allies herself with Nuclear Winter. In an effort to protect the interests of the Motherland, she fights Freedom Force as...RED OKTOBER!

An Italian opera aficionado. Blitzkrieg entrusts him with important tasks, which only serves to boost the indomitable ego of...FORTISSIMO!

A Japanese warrior who was split into a Hive Mind of identical bodies. His enemies know true fear as they face down dozens of enemies, each one an exact replica of...RED SUN!

A powerful mad psychic in the employ of the Third Reich. His foul plans know no morality, and he attempts to create a world under Nazi rule as...BLITZKRIEG!

A being of near infinite power. She thrives on the chaos of existence, and using her powers for pain and destruction only serve to heighten her abilities. Surely all the universe will not fall before the power of... ENTROPY!