This is a list of the characters in Frasier.

Tropes that apply to all of the core group 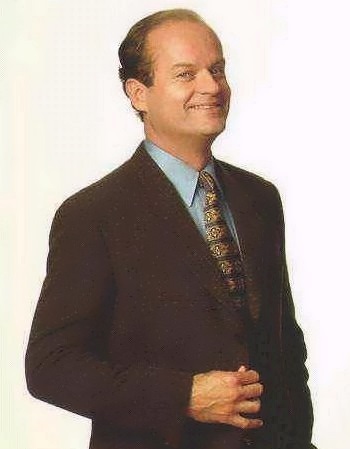 The first leading character of his aptly named show, Frasier has moved to Seattle (from Boston as he was a character in Cheers) and takes a job as the local radio station KACL, where he gets his own call-in show as a therapist. Tropes from ''Cheers'' still apply to him. 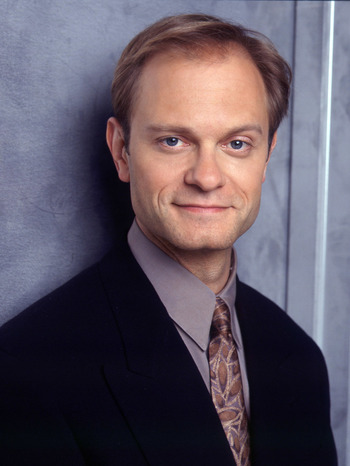 Frasier's brother, even more uptight and snooty than he is. Initially married to a Manipulative Bitch named Maris and an extreme doormat, he falls in love with Daphne at first sight. His Character Development over the series has him grow a backbone as he tries to escape his increasingly unhealthy marriage and some day confess his feelings to Daphne. 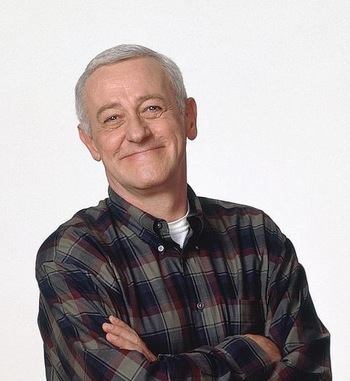 Frasier and Niles's father who moves in with Frasier, he's an ex-cop who was forced to retire when he took a bullet to the hip. Has little patience for his sons' antics and tries (usually with them not listening) to give them valuable advice to make them realize how things are much simpler than they perceive. 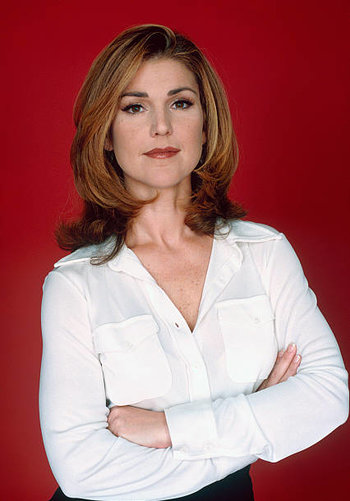 Frasier's producer and close friend. Her very active sex life is the butt of many jokes, but it does also make her a primary source of dating advice. 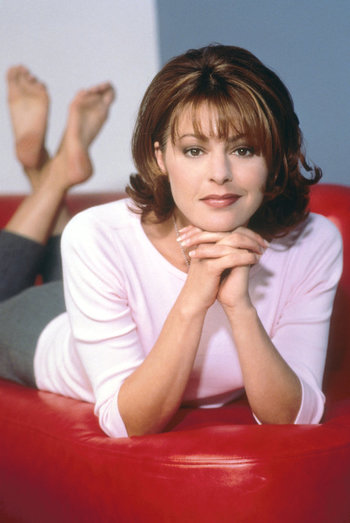 Martin's physical therapist who lives with him and Frasier, she's from England and serves as a working-class presence in a sitcom of mostly high-class characters. Is the subject of affection for Niles, thought she has no idea for the first six seasons. 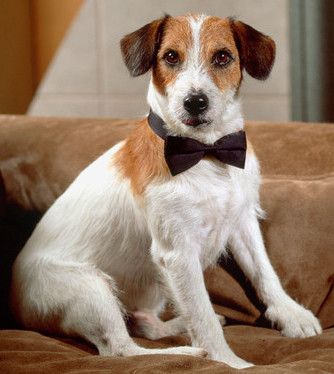 Martin's faithful dog, Frasier and Niles can't stand him and he seems to know it, as one of his favorite pastimes is staring at them to annoy them. Is more a character than a pet, because he's incredibly expressive and intelligent.

Niles's initial wife, she's an incredibly bizarre and eccentric Rich Bitch who is impossible to please, and yet Niles bends over backwards for her anyway. Their marriage dissolves over the course of the show, and Maris makes it as painful for him as she can.

Martin's wife, and Frasier and Niles's mother, a psychiatrist herself who died several years before the series began. 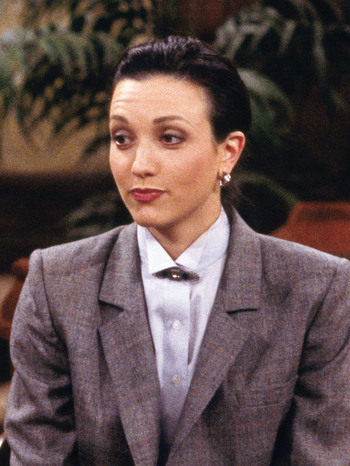 Frasier's ex-wife, she drops in on occasion as they have a son together (Frederick) and still maintain a friendship. The rest of the family is terrified of her. Tropes from ''Cheers'' still apply to her. 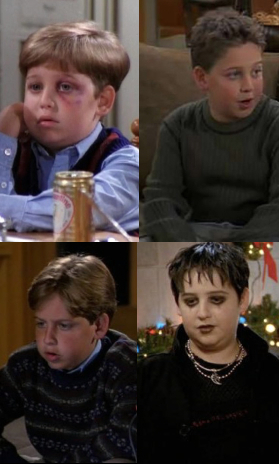 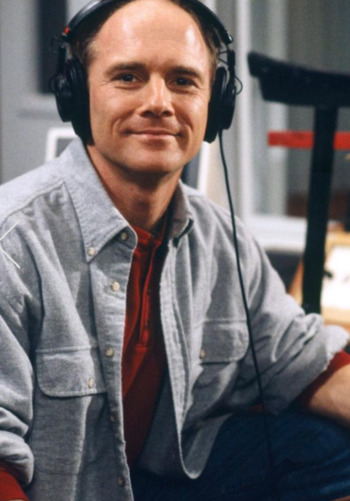 The host of the Gonzo Sports Show at Frasier's radio station, his show usually comes on after Frasier's. Has an on and off relationship with Roz due to the fact she's physically attracted to him but otherwise finds him a disgusting pig (and he is). 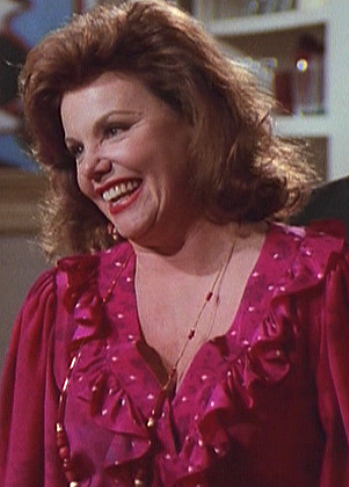 A girlfriend of Martin's in seasons 4 and 5, a cocktail waitress who plays the banjo. Of course, Frasier and Niles can't stand her. 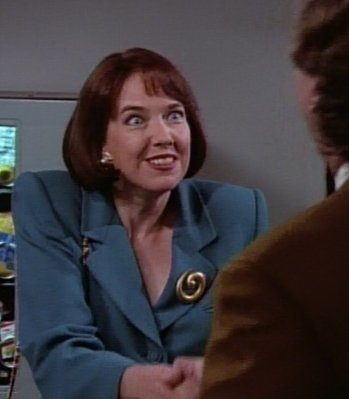 Frasier's agent who will resort to anything to get her clients fame and fortune, largely because she likes basking in it herself. 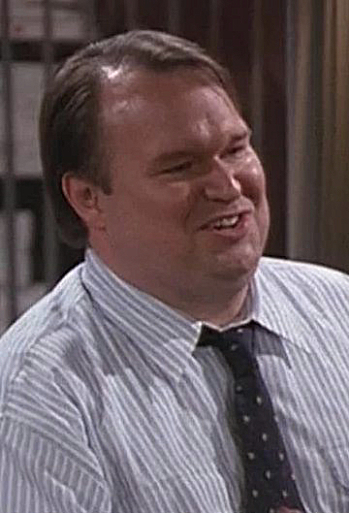 The station manager at KACL, he's a very friendly guy unable to make the hard decisions and is easily swayed.

Daphne's mother who makes no secret she is deeply disappointed in how her daughter turned out. Ridiculously dependent—and ends up living with Niles and Daphne for a while...much to their chagrin.

A good friend of Martin's who owns a bar.

Another radio personality at KACL, who acts as a food critic.

A worker at the KACL studio who is a stereotypical Star Trek nerd (sans glasses), Up to Eleven. Has an insistent crush on Roz and refuses to realizes the feeling isn't mutual.

An old boyfriend of Roz who ends up becoming Niles's divorce lawyer later in the series.

Maris's former plastic surgeon, who becomes Niles's girlfriend for much of Season 7.

A real estate agent who was Frasier's old high school crush. They briefly date in season 7, but it doesn't last long due to Lana's short temper and smoking habits being turnoffs. Despite this, the two remain friends afterwards, even though Frasier still has some lingering feelings for her.

Lana's son, a high school slacker who Frasier tutors in exchange for Lana setting Frasier up with her friend, Claire. Kirby also has a crush on Roz, who ends up going to the prom with him (in exchange for a day off to see a Bruce Springsteen concert by Frasier).

A lawyer and business analyst who begins working at KACL during Season 10. Has a reputation for suing her own employers and being virtually impossible to work with, though that doesn't stop her getting into a brief relationship with Frasier near the end of Season 10.

Charming fellow who moves into the apartment above Frasier's late in the show. The two immediately engage in a rivalry that soon escalates into all-out warfare. Ironically, he and Frasier have a lot in common....

The former childhood babysitter of Frasier and Niles, who meets up with them again in Season 11, and ends up getting into a relationship with Martin, ultimately marrying him in the series finale.

Professional matchmaker with an office near Frasier's, when he sets up a private practice again in the final season. She tries to take him on as a client...and ends up becoming his last love interest on the show.