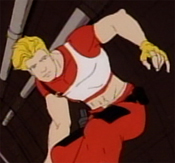 The dapper blonde hero from the comics is now an adrenaline junkie teen who lives for skateboarding, adventure and giving Emperor Ming a headache. Not exactly anyone's first choice to lead a rebellion but somehow he manages. Despite his goofy nature, he has a talent for making friends and influencing people.

A girl who shares similarities with Flash (love of skateboarding, midriff-baring shirts and her father is also in the Air Force) that goes with him to save his parents and ends up trapped on Mongo with Flash and Dr. Z.