This page covers the non-playable characters in Fire Emblem: The Binding Blade, sorted by their affiliation or place of origin.

For the Eight Legends, see this page.

The marquess of Thria and Hector's cousin.

A shaman from Thria and Marquess Orun's advisor. Seeking to join Bern's conquest of Elibe, he plans on dominating Roy's army with an ambush.
Devias (Debias)
Class: Knight

A general of Ostia who turned traitor after Hector's death and Bern's invasion.
Advertisement:

The king of Etruria. He grieves over the death of his son, Myrddin, leaving corrupt nobles to control Etruria.
High Chancellor Roartz
Class: General

The advisor and chancellor of Etruria who wishes to side with Bern.
Arcard (Alucard, Arcardo)
Class: Paladin

The cowardly nobleman of Etruria who oversees the mining operation of Fibernia in the Western Isles. He is also a cohort of Roartz who wish to side with Bern.
Duke Nord of Almar
Class: Druid

A duke from Etruria guarding the Almar Castle in the Western Isles. He attacks the Lycian Alliance in the hopes of gaining more wealth from the Etrurian nobility.
Zinc (Zinque)
Class: General

An Etrurian general in the Western Isles searching for the rebel forces in the peninsula. His immediate goal is to capture Elffin, the rebellion's strategist.
Oro (Orlo)
Class: Bishop

A cruel Etrurian priest leading a mining operation in Mt. Eburacum. He is currently on the hunt for Echidna, the leader of the rebellion in the Western Isles.
Robarts (Roberts)
Class: Paladin

A general hired by Arcard to oversee Castle Edina in the Western Isles, where men forced to work in the local mines are held prisoner.
Windam (Windham)
Class: Bishop

A bishop who guards the Tower of the Saint, where the legendary tome Aureola is kept, under Roartz's orders.

A general from Bern stationed in Ilia to repel the Lycian Army.
Sigune
Class: Falcoknight

A captain of the Ilian pegasus knights. She betrayed her country once she saw Bern's supposedly inevitable victory in the war.
Teck (Tick)
Class: General

A general from Bern guarding the ruins around Ilia in which the legendary spear Maltet is kept, per Murdock’s request.

The chieftain of the Djute clan in Sacae who, after being defeated by Bern's forces, joined them in mowing down his fellow tribes.
Gel (Kel)
Class: Swordmaster

The remaining leaders of the Djute clan seeking revenge for their fellow tribesmen and to protect the divine bow Mulagir.

A seemingly spineless and actually treacherous knight in command of a fort on the Bern - Lycia border.

A mercenary leader who leads the assault on Arcadia.
Ohtz (Oates)
Class: Sage

A lieutenant in Bern's army who leads the assault on Arcadia, looking for the Divine Anima tome Forblaze.
Raeth (Raith)
Class: Paladin

A Bernese commander defending a fort bordering Etruria. He captures Fae and holds her in his fortress.
Pereth (Peres)
Class: Druid

One of Murdock's best lieutenants in charge of guarding the Shrine of Seals and the dark tome Apocalypse residing in it, following Murdock's death.

A bandit leader from the Bolm Mountains that lead his gang to sack Pherae.
Dory
Class: Brigand

A bandit leader leading a raid on the countryside of Lycia.
Henning
Class: Hero

A bandit leader hired by Bern to bury the entrance to Armads, but has plans for the axe itself.
Maggie & Rose
Class: Berserker

The two bandit twins in the Nabata Desert.

The first of Bern's Manaketes that Roy's army encounters. Flaer leaves him behind as a nasty surprise to the forces that are storming Arcard's mansion.
Soldier: “The reinforcements from the south will arrive shortly!”
Aine: “……”
Soldier: “…Th-That’s all, sir.”
Soldier: “That guy scares me…”
Jahn (Yahn) 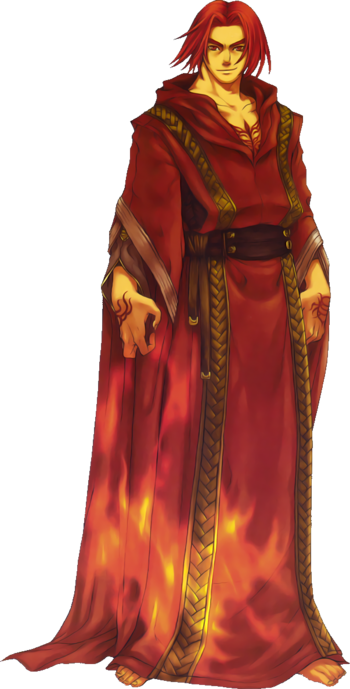 A mysterious stranger who's watching over an ancient shrine in the mountains of Bern. 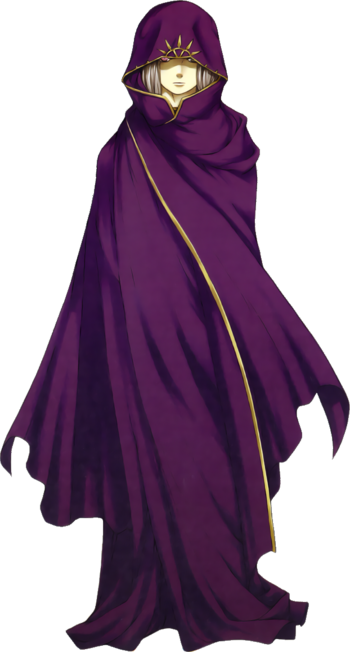 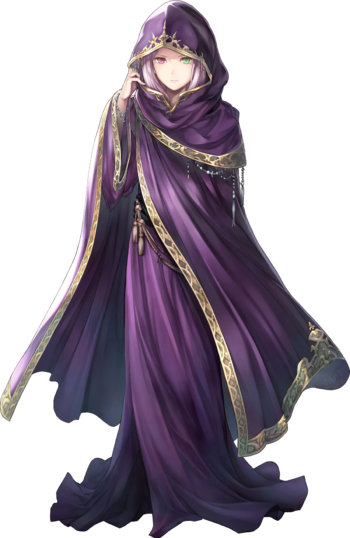 A strange cloaked girl who is always lurking at Zephiel's side, and controls Bern's Manaketes. It's eventually deduced that she's the infamous Demon Dragon described in lore of The Scouring, whose defeat by Hartmut ended the war.

The truth of the matter is far more disturbing.