Spoilers Note: Three of the first generation's Nohrian retainers are the subject of a major plot point revealed only through supports and DLC. This spoiler is unmarked to avoid massive blocks of spoiler text.

Child Characters recruitable in all routes: 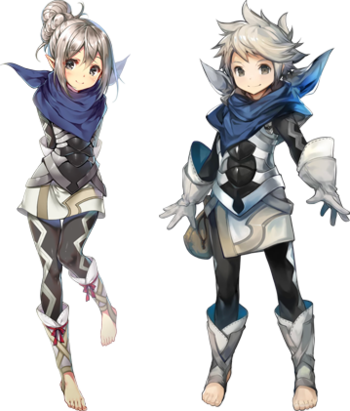 Dragon Spawn
"You look upset, Papa/Mama. I didn't mean to do it. I only wanted to protect you! But I'm small. And I felt...useless."

The child of Corrin, whose gender is always the opposite of their parent. Though they are cheerful, obedient, and energetic, they are actually a quite lonely person who (especially in the case with Female Kana) cries often. They enjoy the fact that they're dragons. Their birthday is April 19th.

Just like their parent, their personality is different depending on gender, though the changes are more drastic. The female Kana is peppy, energetic, and loves helping others in any way she can, but is also more childish, can be a bit of a ditz, and cries more often. The male Kana is a bit more mature and willing to take on responsibilities, but also feels the need to prove himself to others (especially his mother). In the Heirs of Fate DLC, Kana becomes the wielder of the Yato.

The son of Azura. Like his mother, he is great at singing, has sharp senses, and an artist’s soul. Though calm, collected, kind, and gentle, he can be moody and loves doing things at his own pace. He loves high places. His birthday is June 6th.

Sleepy Butler
"As if I don't have enough trouble."

The son of Jakob. Though he has an apathetic personality, he has extremely great potential. Thinks often of his comrades. He is a naturally skilled butler, and is just as skilled at combat. He has the most hidden talents. His birthday is November 16th.

Clumsy Knight
"I have to come to the rescue! I bet Daddy will even be proud of me!"

The daughter of Silas. She is extremely prone to making mistakes, but is always optimistic and cheerful. She named her favorite horse Avel. She talks to herself more than anyone. Her birthday is July 21st. 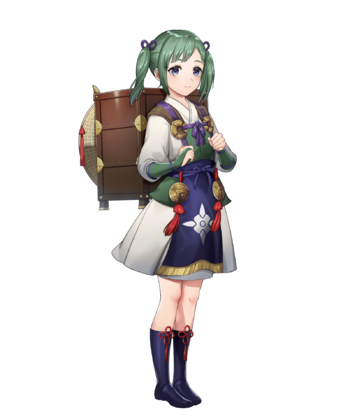 Reliable Chemist
"Pick on someone your own size!"

The daughter of Kaze. She loves to make medicine and has a curious mind. This makes her a polite and honorable student. She also loves her father and likes to brag about him whenever the opportunity presents itself. Has the most acute sense of taste. Her birthday is May 17th. 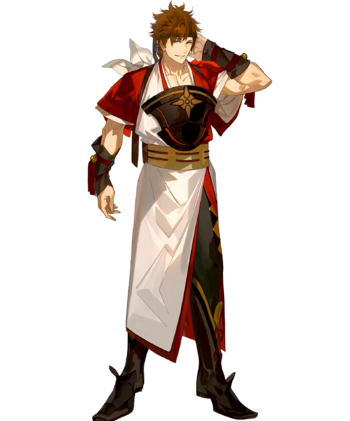 Raw Talent
"You ready for this? I doubt it. Fine then. Take your best shot."

The son of Ryoma. Aims to be like his father and considers him a worthy rival. Friendly, but the type of person who hates to lose. He finds no greater joy than fighting the strong and always hungers for victory. The best arm-wrestler. His birthday is August 22nd.

Upbeat Archer
"No biggie. I've got the bow my dad gave me. Let's call this target practice!"

The son of Takumi. Both optimistic and friendly, he thinks about everything in a positive way. He’s a wild boy blessed with limitless physical strength. Has the best eyesight. His birthday is July 4th.

Sweet-Toothed Ninja
"You care about your dumb name more than you've ever cared about me. It's my life. I'll live as I please."

The son of Saizo. A cool, sharp, and able person that's extremely fond of sweets. He doesn't want to follow his father's footsteps as Saizo the Sixth, which naturally puts a large strain on their relationship. He smells the best out of everyone in the army. His birthday is January 1st.

Pickle Pro
"I have to fight my own battles. Starting now."

The son of Hinata. Very serious and a stickler for protocol, in complete contrast to his father's laid-back and informal attitude. He is careful about everything he does. Loves tea and pickles above all else. Acts the oldest despite his age. His Birthday is September 27th. 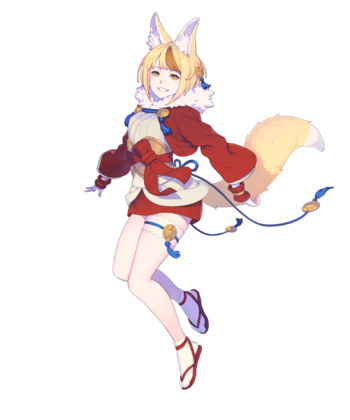 Free Spirit
"Hmm? What's does "selling" mean? Or this "dead" thing? Weird. Whatever it is, sounds like fun."

The daughter of Kaden. She has an innocent and cheerful personality. She is very active and loves to play around. She is the least afraid of things in the army. Her birthday is October 20th.

Starry-Eyed Poet
"Beseeches he me? / I am the Maiden of Z's. / At the least say please."

The daughter of Azama. She loves to sleep, and can even be found napping in really bizarre places if she gets tired enough. Often speaks in haiku to express her feelings. Spends the most amount of time dreaming, more so than anyone else in the army. Her birthday is June 26th.

Perfect Angel
"I'll never be as perfect as you are, Father. But I'd like to start trying to be!"

The daughter of Subaki. She's a very gifted individual, though she often downplays her strengths and constantly works to improve herself. Can be a bit snippy towards others if they try to skip out on chores or do something disagreeable, but she ultimately means well. She falls in love more easily than the other members of the army. Her birthday is July 6th. 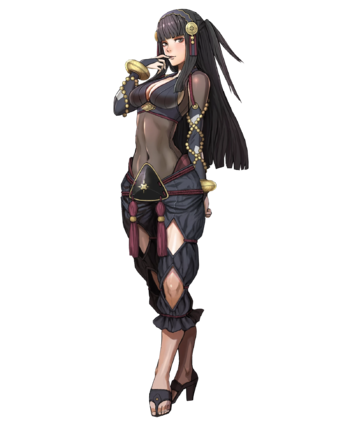 Black Magician
"Hee hee hee! You truly want to tangle with me?"

The daughter of Hayato. Appears as a boss leading an army of Faceless. She is extremely prejudiced and stalks those she deems compatible with her. Thinks her father is childish. Deeply delusional and has a one-track mind. She stalks people who tickle her fancy and makes it her daily duty to research dubious spells. Has the darkest thoughts. Or in the Japanese version She has the best thighs in the army. Her birthday is April 1st. 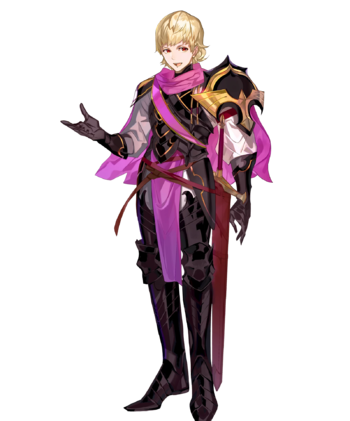 Future King
"If I can't manage a few incursions here...if I couldn't defeat them...I wouldn't be worthy of being called your son."

The son of Xander. He is kind, serious, straightforward, and a culturally refined elite. Despite his strengths, he sees his father as an insurmountable paragon that he has no hope of matching. Has the whitest teeth. His birthday is May 28th. 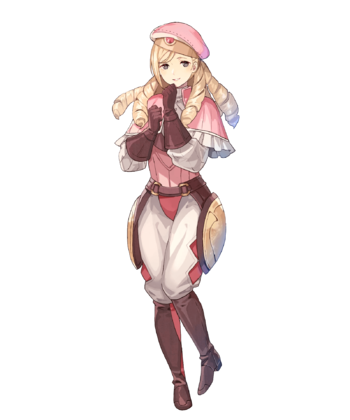 Fashion Forward
"Excuse me? Since when is saving lives considered a disgrace?"

The son of Leo. He loves fashion and is noted to be very talented at making clothes. However, his decision to become a healer over a warrior combined with his tendency to wear women's clothing has led to clashes with his father. Is the most sympathetic towards others. His birthday is March 13th.

Frightened Knight
"Oh no! What will you do? I mean, what can I do?"

The son of Benny. Though he looks unsociable at a glance, he is a timid person like his father. He is fond of cute things, but hates ghosts and bugs. Chatters the most. His birthday is August 16th. 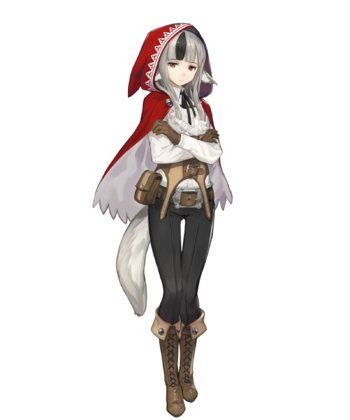 The daughter of Keaton. She loves everything about her father. Her emotions fluctuate a little, and she has a bit of a wicked tongue. Has the dirtiest room. Her birthday is October 11th.

Luck's Sidekick
"Back, evildoer! Return to whatever dark hole of naughtiness you crawled out of!"

The son of Arthur. He is obedient and naïve. Though his father is perpetually unlucky, Percy has astronomical good luck. His wyvern's name is Ace (Michalis in the Japanese version). Spots the most shooting stars. His birthday is September 5th. 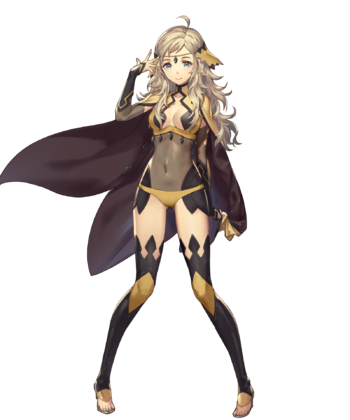 Dramatic Heroine
"The chosen heroine arrives! And what is she called, this maiden of darkness? Ophelia Dusk is her name!"

The daughter of Odin. She follows her father's "chosen one" act since she desires to be be just like him, but she also takes it much more seriously and tends to be rude to people who don't indulge her mannerisms. She makes use of stars and stones to perform curious incantations. She is the one most skilled at skipping. Her birthday is September 15th. 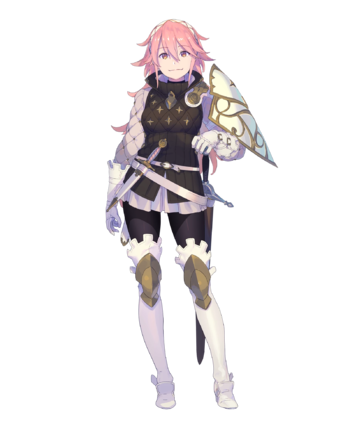 Adorable Adorer
"Come on! Turn that frown upside down. Know what you have then? A smile!"

The daughter of Laslow. She has a cheerful and energetic personality. Though she is not too shy, she can get anxious about her surroundings and is quite infatuated with the same sex. She is the worst singer in the army. Her birthday is August 31st. 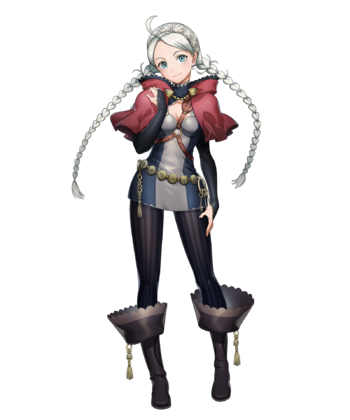 Eye Spy
"I had to pursue my true calling. That of chivalrous thievery!"

The daughter of Niles. She's cool, collected, has a good intellect, and is exceptional when it comes to stealth and recon, but she also frequently fantasizes about men doing inappropriate things together. She is the worst at talking to the opposite sex out of everyone in the army. Her birthday is January 31st.