This page covers the Hoshidan retainers and other characters who join the player in the Birthright campaign of Fire Emblem Fates. 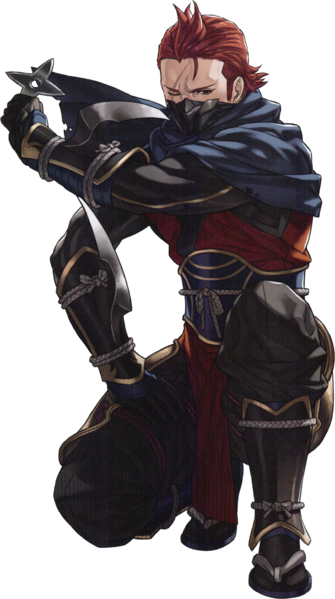 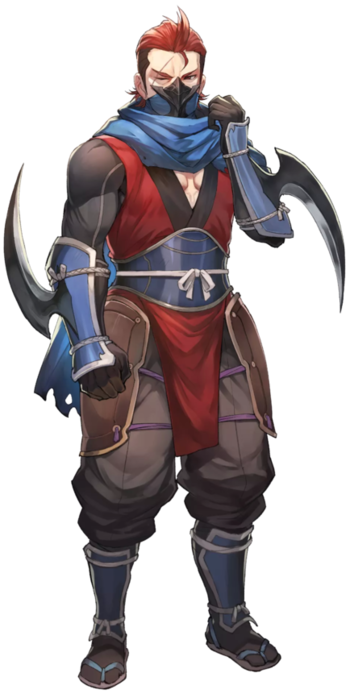 Angry Ninja
"Know the name of your doom: Saizo the Fifth!"

One of Ryoma's retainers. The polar opposite of his younger brother, Kaze; he’s hot-blooded and easily fired up. While Kaze follows the Avatar regardless, Saizo is only an ally during Birthright and Revelation. Despises sweets more than anything. His birthday is October 2nd.

Traditional Ninja
"This is what we've trained for."

A Ninja who works with the reckless Saizo as one of Ryoma's retainers, often having to restrain her counterpart. Calm and rational, and has a surprising passion for painting despite not being good at it. The best diary-keeper. Her birthday is July 26th. 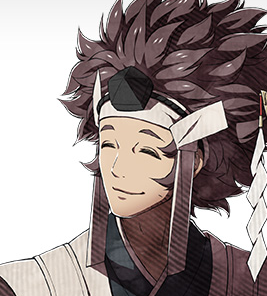 Calm Philosopher
"Death comes for everyone!"

A healer and one of Hinoka’s retainers. He's sociable and has a mild personality. Upon first glance, he appears to be some kind of clergyman one can learn from; however, he is aloof from the world, questioning and thinking about menial things and sometimes shows his sharp tongue. The hardest to make cry. His birthday is September 9th. 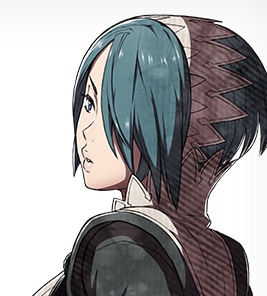 Hinoka’s retainer, adept at archery. She is quiet and shows up at unexpected places at unexpected times. She’s extremely clumsy, but never feels shame and rarely realizes when she's offended someone. She spaces out in her leisure time, and silently shoots things down to pass the time. Has the most flexible body. Her birthday is May 20th. 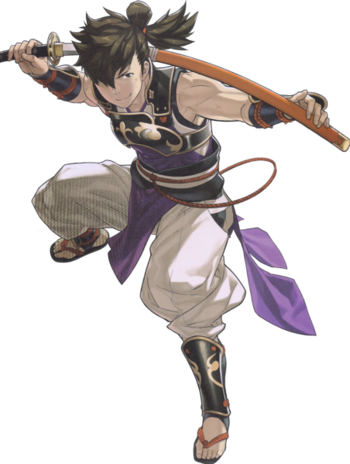 Wild Samurai
"It's not in my blood to sit on the sidelines!"

One of Takumi's retainers whose family has served the Hoshido royal family for generations. He's rather gullible and quick to anger, but he makes friends easily and draws his strength from them. Has a soft spot for women (which can backfire) and loves open fields. His birthday is May 10th. 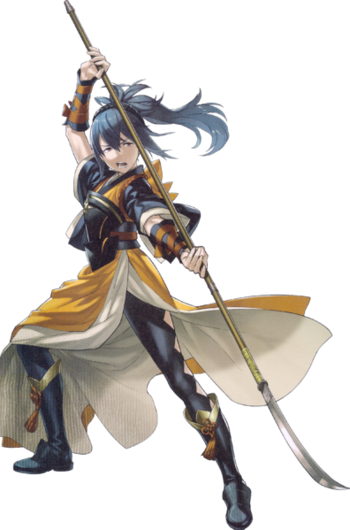 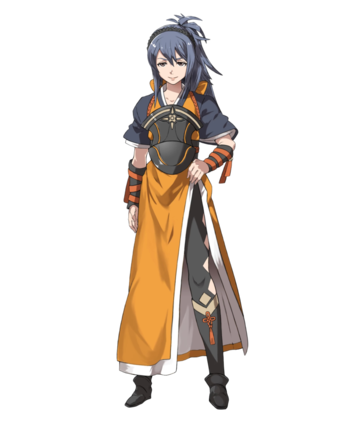 Fierce Fighter
"I do so despise Nohrians. So much so, in fact, that my face turns sour whenever I'm looking at one. Don't worry about it. It's nothing personal."

A retainer of Takumi's who holds a deep hatred of Nohr born from her past experiences. She's also rather girly and harbors a crush on her lord. She changes attire the most and the fastest. Her birthday is November 28th. 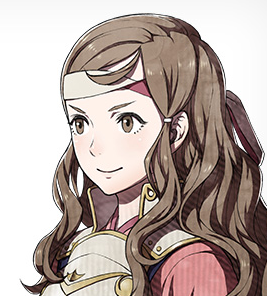 Focused Samurai
"I swear that my sword will not rest until Lady Sakura is safe!"

A renowned and skilled swordswoman who serves as Sakura's retainer. Hana claims to be Sakura’s most capable subordinate, and the two have shared a powerful friendship since childhood. Likes cherry blossoms the most. Her birthday is March 28th.

One of Sakura's retainers. Subaki is an easy-going man who can always be seen wearing a smile. He's viewed as carefree because of how he talks, but he's actually quite hard on himself and strives for perfection. Has the cleanest hands. His birthday is February 7th. 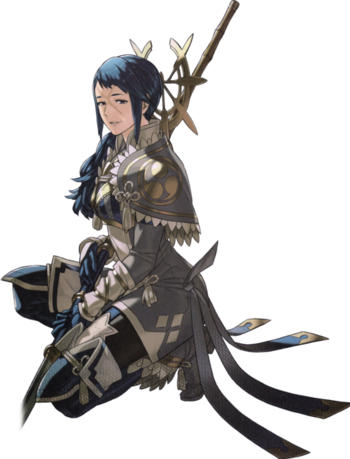 Morbid Fixation
"I will grant you the most divine death if you'll let me hear you scream..."

One of Mikoto's retainers, and the daughter of a prominent feudal lord of Hoshido. Though she is gentle, one part of her absolutely loves battle. The best listener in the army. Her birthday is November 7th. 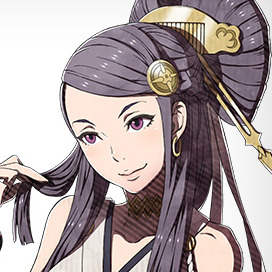 Secret Keeper
"All in the cards!"

A purple-haired spellcaster, adept at incantations and fortune-telling. Orochi actually hails from a noble family, and is one of Mikoto's retainers. Though she has mysterious vibes with her calm, old-fashioned manner of speaking, she actually has a bright and playful personality. Laughs the easiest and is also the loudest drinker. Her birthday is June 19th. 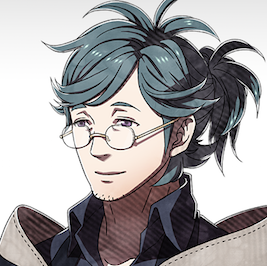 Puppet Master
"Good thing I spent all that time working out my battle strategy ahead of time."

A key strategist in the Hoshido army that as served in his position from when King Sumeragi was alive. He was born into nobility and his father was also a tactician. Kind, gentle and serious, but also has a strict side that doesn’t tolerate compromises to his work. His hobbies are reading and developing mechanisms. He breaks the most glasses out of everyone in the army. His birthday is April 28th.

Yukimura is a Secret Character that only joins the player's army in Birthright once certain criteria are fulfilled. 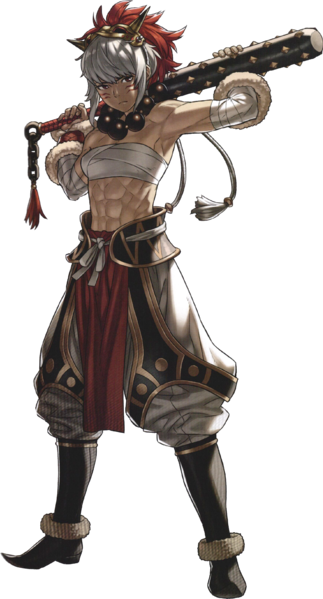 Scion of Flame
"Behold the might of the Flame Tribe!"

A warrior of the Flame Tribe, of which her father is the chief. Rinkah dislikes socializing, abiding by her tribe's solitary culture, but is a passionate fighter driven by warrior pride. She has the highest body temperature. Her birthday is February 5th. 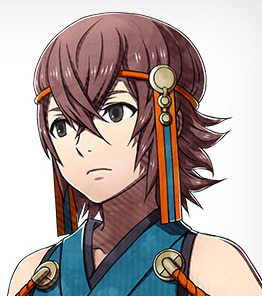 The Kid
"Hmph, like I'm even capable of holding back."

A young boy from the Wind Tribe. Despite his age, he possesses incredible talent for spells and demands to be treated as an adult. He doesn't handle dark places well. Drinks the most milk. His birthday is September 19th. 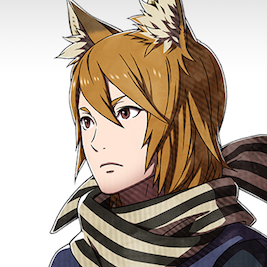 Kitsune Braggart
"I've really got myself in a pickle with this whole favor thing..."

A fox spirit youth who lives in a remote region of Hoshido. Following in his father’s footsteps, he acts as his clan’s leader and keeps his people in order. He works everyday to repay a debt, and loves beautiful things as well as himself. Has the best posture. His birthday is July 12th. 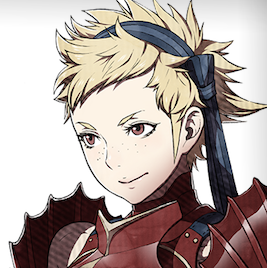 Rebellious Streak
"I won't let Nohr oppress my people any longer. For freedom!"

A rebel from the Principality of Cheve. She has a pure, lively, freewheeling personality. She likes to decorate her weapons and armor with cute decorations. Loves shiny things. Her birthday is August 3rd.