This page details the minor and secondary antagonists that you will encounter in Fire Emblem: Awakening. For other characters, head back by clicking here. Unmarked spoilers ahead. 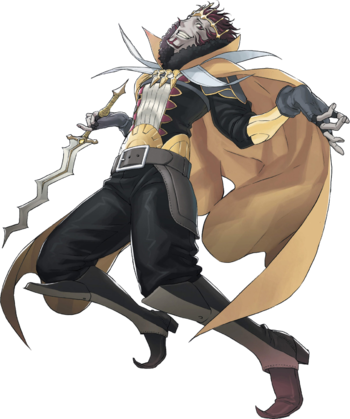 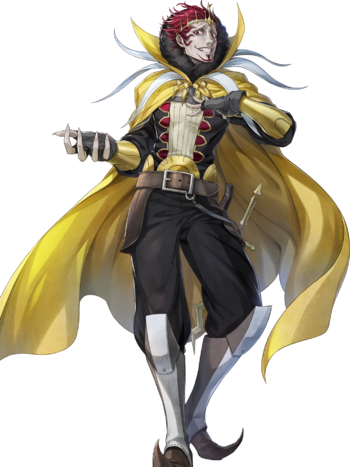 The wild and ruthless king of the Theocracy of Plegia (hence his title Mad King). He takes sick pleasure in hurting and deceiving others. He was ultimately being used by Validar for the latter's nefarious goals, and is presumably killed in battle against Chrom's army.

After the two-year timeskip, he is revealed to be alive in the first SpotPass chapter, working for a group of brigands, and can be convinced to join Chrom. After joining, he starts changing his terrible ways. It seems he experienced a harsh past that weighs on his mind. He's more afraid of heights than anyone in the army. His birthday is March 16th.

For this character's character sheet, look up her entry here. 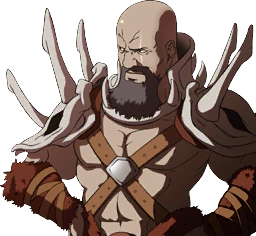 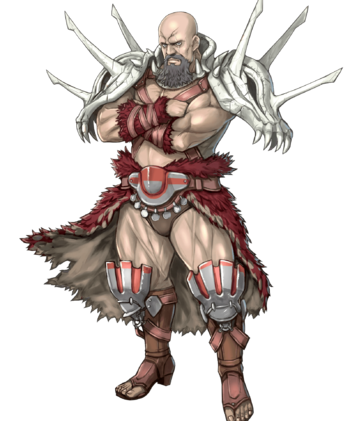 The boss of Chapter 10. A general of Plegia who fights Chrom after Emmeryn's sacrifice. 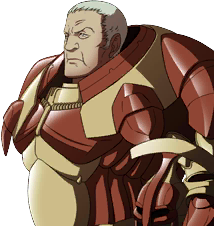 The boss of Chapter 9. One of Gangrel's generals, who is the only thing standing between Chrom and the Shepherds and Emmeryn's execution.

"Smell that, men? The winds of fortune are blowing our way!"

The boss of Chapter 7. A wyvern rider who serves as a commander in the Plegian army. 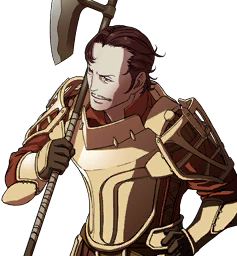 The boss of Chapter 5.

"I won't ask for your name. Only your life!" 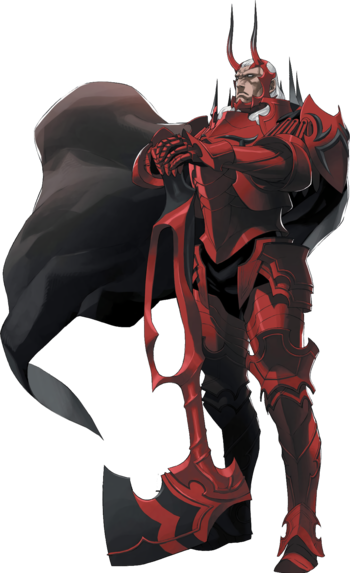 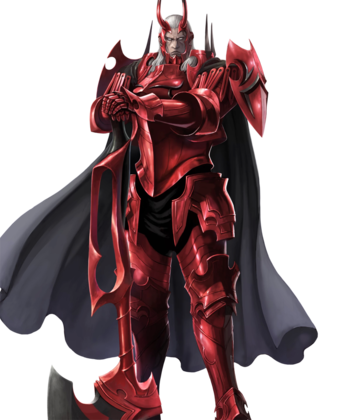 "Behold: I am Walhart the Conqueror! And you are but a pebble upon my path to immortality."

The unforgiving man who forged the Valmese Empire and unified the continent by force. He loathes losers and cowards and sought to unite the world through absolute power. While he holds down his opposition by force, he has the charisma needed to lead a country. Has a strict personality and his manner of speaking is difficult to understand. He's noticeably older than the rest of the playable characters, Einherjar cards and Old Hubba notwithstanding, and he's at the helm of an empire that conquered an entire continent.

In a late sidechapter of the main story, he is revealed to have survived his apparent defeat, and his sheer power allowed him to command some Risen, as shown when he reappears in the second SpotPass chapter. Chrom can fight him one last time so that he can be recruited into Chrom's army. He becomes much calmer after joining Chrom's group, and serves as the army's number one vegetarian. His birthday is September 14th. 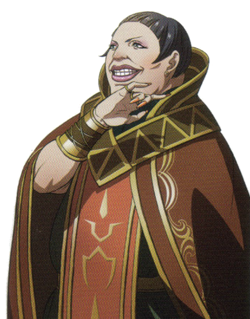 "Tya ha! The fools have no idea what they've just stepped into! Eee hee!"

A Grima worshipper who serves Walhart. He serves as Valm's tactician and is keen on using underhanded means to keep his soldiers under his thumb. His true allegiance being with Validar and the Grimleal, Excellus has been promised the Plegian throne if he can seize the Fire Emblem amidst the war while also sabotaging the Valmese Empire from the inside. Unfortunately, Walhart reveals he is all too aware of Excellus's true motives. 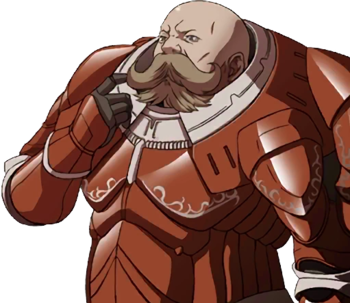 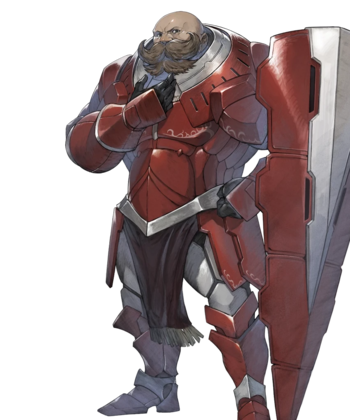 One of Walhart's generals. As he has never lost in a fight, and has never shaved since his first battle, he believes that his mustache makes him invincible. 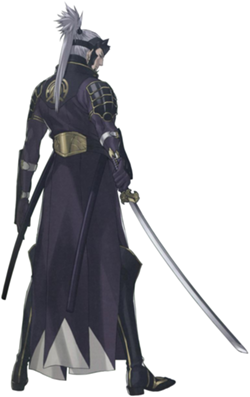 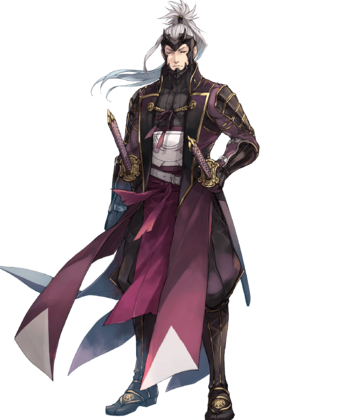 The former king of the small nation of Chon'sin, and Say'ri's elder brother. Having turned his back against his nation and sister, he became one of Walhart's top generals. He has an old-fashioned and serious personality and enjoys meditating.

After his death, Excellus steps in and explains the truth about his apparent defection from Chon'sin to Valm: he became one of Walhart's generals in exchange for Say'ri being allowed to live, and died fulfilling that bargain. However, in the Bad Future's timeline, it was Say'ri that died, and Yen'fay traveled back in time at some point after her death. He can be recruited in the fourth SpotPass chapter. He is determined not to lose his sister again and can stand heat better than anyone in the army. His birthday is July 23rd. 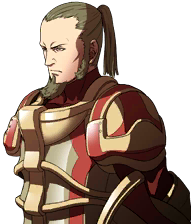 "You are nothing! A speck of sand on the boot of the great empire!" 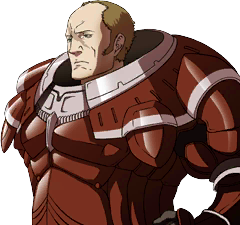 "One ship against three of ours? They're either very brave or very stupid..." 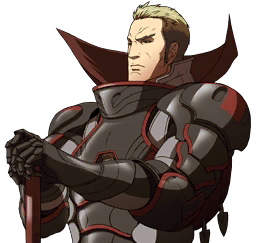 "Long live the emperor! Death to all who oppose him!" 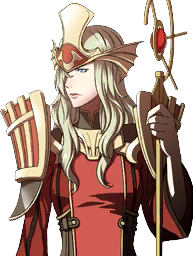 "Sometimes those who will not walk must be dragged along or pushed aside. So raise your sword, Chrom of Ylisse, and prepare to be pushed aside."

The boss of Chapter 17. A woman in service to Walhart. Previously a pacifistic priestess who believed the words of Emmeryn, she renounced her faith after Walhart came to power and swore loyalty to him, seeing him as a god among men.

"Gwa ha ha! Get to it, lads! Grab anything shiny, and put the rest to the torch!"

The boss of the Prologue. A leader of some barbarians likely to be from Plegia.
Class: Barbarian

"Time them castle whelps learned what us wild-born men can do!"

The boss of Paralogue 1. He attacked Donnel's village and took its population, including his mother, hostage.

Victor and Vincent (Handsome and George)

Class: Berserker (Both of them)

The boss of Paralogue 5. Leader of a group of bandits obsessed with finding buried treasure.
Class: Assassin

The boss of Paralogue 7. A brigand with a chip against his shoulder against religion and nobility.
Class: Hero 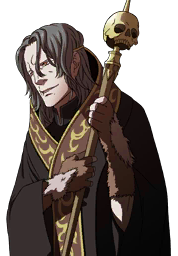 The boss of Paralogue 8. A self-professed 'liar and sneak' who has no interest in a fair fight.
Class: Sorcerer 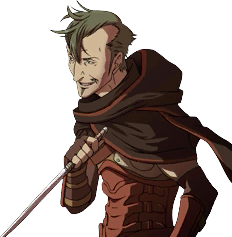 The boss of Paralogue 9. A con man who has been terrorizing a village while impersonating Chrom, and a girl named Cynthia follows him out of the belief that he is.
Class: Trickster

The boss of Paralogue 10. A former Valmese General terrorizing a local village off the west coast of Plegia. Seeks to rule his own perverse empire and forces Cordelia's daughter Severa and a man named Holland to do his deals.
Class: Sage

The boss of Paralogue 11. A bandit who wanted to round up the Wyverns of Wyvern Valley to sell them.
Class: Berserker

One of the two bosses of Paralogue 13. Leader of the Stonewall Knights mercenaries.
Class: General

One of the two bosses of Paralogue 13. Leader of the Riders of Dawn mercenaries.
Class: Paladin

The boss of Paralogue 14. A bandit leader who wanted to find the Mirage Village and it's treasure.
Class: Warrior

The boss of Paralogue 15. A slaver.
Class: Bow Knight

The boss of Paralogue 18. A powerful pirate warlord called the "Southron Sea King", one of his subordinates is Gangrel, the former King of Plegia.
Class: Berserker