This page details the major antagonists of the game: the Fell Dragon Grima, and the group known as the Grimleal who worship him and seek to revive him. If you want to see the other characters, head back through here. Please be warned that this is a group of villains who appear late in the game, so all spoilers will be unmarked. Proceed with caution. 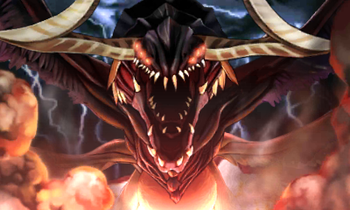 Grima from the main universe 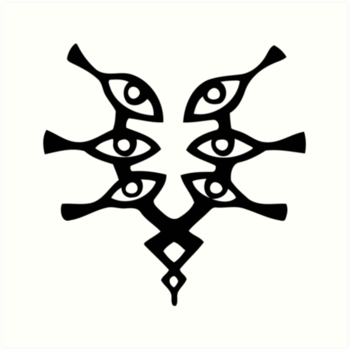 The Brand of Defile/Mark of Grima 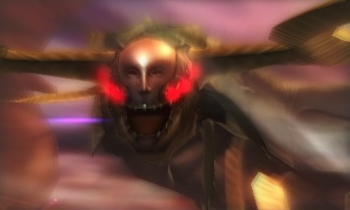 Exposed face
So ends the human race. The future is built upon the past... but your kind will never see it!

The Big Bad of Awakening. The Fell Dragon who tried to destroy the world in ancient times, but was sealed away by the one with the Divine Dragon's blessing. While the Ylisseans fear the Fell Dragon, the Grimleal who control Plegia worship him as their god. According to legend, Grima is gigantic in size. A thousand years later, Grima is awakened when a suitable vessel is born and the Awakening Ritual is performed. This vessel turns out to be Robin (aka you - the player), and in the Bad Future, Validar succeeds in awakening Grima, who possesses Robin and kills Chrom. In the main story, the present Grima is revived once the Grima from the future uses his host Robin body as a substitute for the real Robin's, and the two fight Chrom and his army. The possessed body Grima uses is referred to as the Hierophant.

Echoes: Shadows of Valentia reveals Grima is the creation of the alchemist Forneus using Dragon and Human blood. For tropes related to him as portrayed in Echoes, see here. 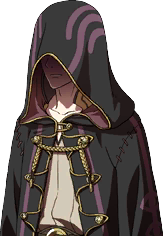 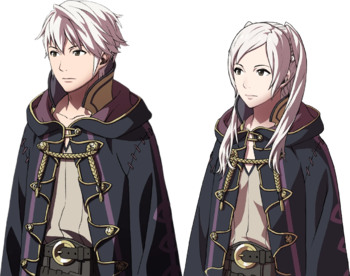 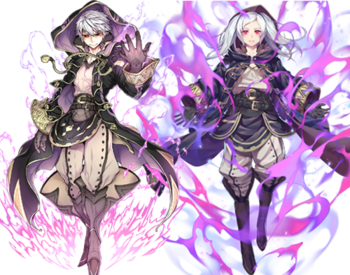 The mysterious tactician of Plegia. Actually the Robin of the future timeline possessed by Grima of the Future. 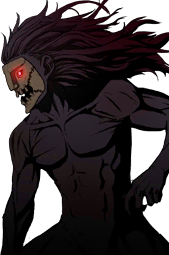 Undead soldiers of unknown origins. They appear in the guise of humans, yet possess no self-awareness, attacking the living without remorse. Following a cataclysmic event, they began to mysteriously appear from portals in mid-air. In the future from which Lucina and the other children come, the Risen overwhelmed humanity when Grima was awakened, instigating the end of the world as they knew it.

Echoes reveals that the Risen were created by Forneus from corpses reanimated by swarms of bugs known as Thanatophages.

Class: Varies (Revenant and Entombed are exclusive to them)
The Grimleal
An evil cult of mortal men who worship and serve Grima.

Tropes that apply to the Grimleal as a whole are:

The boss of Chapter 8. A member of the Grimleal.
Class: Dark Mage

The boss of Chapter 21. Is a member of the Grimleal. An alternate-universe Algol appears as the boss for the Death's Embrace map of the Challenge Map Pack.

A group of twelve mysterious warriors that serve Validar and the Grimleal.

They also appear in a DLC Chapter, Thirty-six of them all holding many kinds of Legendary Weapons some of which you can obtain through the chests they guard.

The boss of Paralogue 6. Is a member of the Grimleal.
Class: Assassin

The boss of Paralogue 20. A member of the Grimleal. He plans to sacrifice villagers to Grima, and one of them is an amnesiac Emmeryn, Chrom's sister.
Class: Sorcerer
Advertisement:
Validar 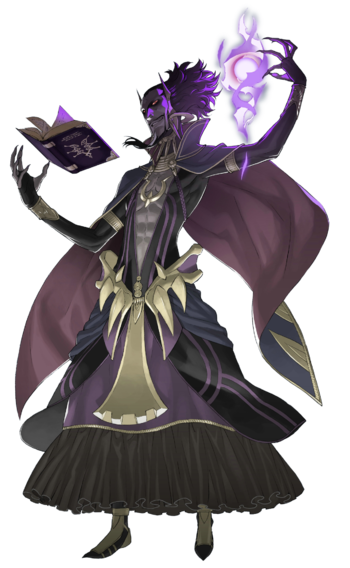 "Fools. Struggle all you want. You cannot unwrite what is already written!"

A sinister mage in service to a dark power - the Fell Dragon Grima, whose coming heralds the end of everything. He is the leader of the Grimleal, a cult that worships the evil dragon. His scheming sets the world on a course to destruction. He plans to resurrect Grima and is devoted to creating a suitable human vessel for that purpose. After finding that their infant child bears the Mark of Grima, marking them as a perfect vessel, Validar's wife betrays him and flees with their offspring. For many years Validar will search for his child in vain, hoping to subject them to their destiny. This child is later revealed to be Robin.

After the death of Gangrel, Validar becomes King of Plegia and poses as Chrom's ally in the war against Walhart. After Walhart is defeated, he lures Chrom to his castle and steals the Fire Emblem so that he can perform the Awakening ritual in order to resurrect Grima. He cuts off Chrom and Robin from the rest of the army, and feigns death before forcibly manipulating Robin into killing Chrom. Validar is revealed to be alive afterwards, laughing at Lucina and the rest of the army's attempts to change fate.

However, Robin anticipated Validar's plan due to their premonition and had Basilio fake his death against Walhart, allowing him to swap out the stones in the Fire Emblem with forgeries. This allows Robin to resist Validar's control, weakening their strike enough so that Chrom survives. After this is revealed, Validar launches a final assault against Chrom and his army, but dies in battle. 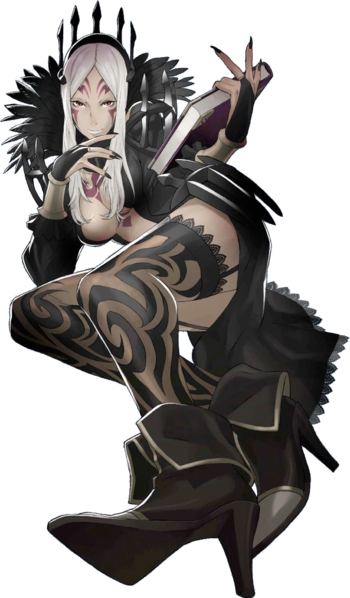 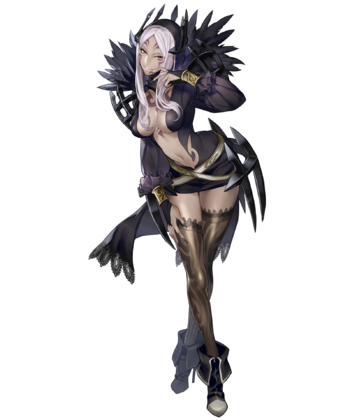 Gangrel's subordinate. A cunning vixen who leverages her "assets" to lead men to their ruin. She is actually the servant of Validar, as Validar supposedly saved her life in the past. In the fifth SpotPass chapter, it is revealed that Validar saving her life is a lie. In reality, he murdered Aversa's parents and brainwashed her to be his servant. She joins Chrom's army afterwards if she survives and fights for atonement, ever since she discovered she had been used by Validar. Bathes longer than anyone else in the army. Her birthday is November 3rd.

In the Outrealm, specifically the Champions of Yore DLC, an Aversa which hails from another world has gotten her hands on the Einherjar from Old Hubba, and Chrom has to help him get them back from her.