Many key events and revelations aren't hidden by spoiler tags here, including the aliases and true identities of several characters. Read this page at your own risk.

Bartz is a wanderer from the town of Lix, accompanied by his chocobo Boko. His mother Stella died when he was a child, and his father Dorgann died three years before the beginning of the story. He has a fear of heights resulting from falling off a rooftop during a hide-and-seek mishap. He was chosen by the Wind Crystal, symbolizing passion. It turns out that his father Dorgann was one of the Warriors of Dawn, further linking his destiny to saving the world. Bartz also appears as a playable character in the Dissidia Final Fantasy and Theatrhythm Final Fantasy spinoff series.

Princess and heir to the throne of Tycoon, Lenna is a caring young woman, to the point of putting the life of others before hers. This made the Water Crystal choose her, as its essence was that of devotion.

Galuf is an amnesiac old man, who was found near a meteor. It seems that his mission is to protect the crystals, and he takes along Lenna (and eventually Bartz) along for the ride. The Earth Crystal chooses him, symbolizing hope. It is eventually revealed that Galuf is one of the Warriors of Dawn and the king of Bal, who fought alongside Bartz's father Dorgann thirty years prior to the series. He later dies while protecting the party from Exdeath in the Guardian Tree.

Faris is the leader of a band of pirates, who catches the party trying to steal their ship. Faris eventually lets the party use their ship, which can move without wind due to Faris' sea creature friend, Syldra, moving it. Faris is chosen by the Fire Crystal, symbolizing courage. It is revealed quickly that Faris is in fact a girl, with a mysterious past somehow connected to Lenna. She appears in Theatrhythm Final Fantasy as a playable sub-character.

Krile is Galuf's granddaughter, not that he remembers her at first. A bright and optimistic girl, Krile is extremely knowledgeable and helps the others on their quest to defeat Exdeath and save the worlds. She's also a bit of a Walking Spoiler, but you probably know already that she eventually joins the party. 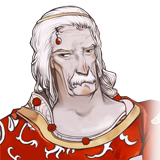 Voiced by: Hiroaki Ishikawa (Japanese) [Legend of the Crystals]

The requisite "Cid" of the game, he's an elderly inventor and scholar who researches the Crystals. 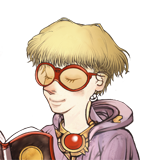 Cid's grandson. He is a bookworm and an inventor who looks up to his grandfather. 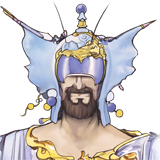 Lenna's father, the king of Tycoon. Sets off to the Wind Shrine at the beginning of the game; when he doesn't come back, Lenna sets out after him, beginning the story of the game. He's also the father of Sarisa, AKA Faris.
Dorgann Klauser 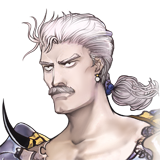 Bartz's father, who died three years prior to the events of the game. He trained Bartz in fighting, and is the one who encouraged him to become a wanderer. He is also one of the Warriors of Dawn and hail from Galuf's World. He decided to remain in Bartz's World to ensure the seal on Exdeath does not break. 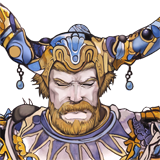 A former Warrior of Dawn, the King of Surgate and good friend of Galuf. The party lands in the middle of his navy when he attacks Exdeath's barrier.
Kelger Vlondett 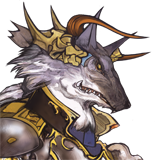 The leader of the werewolf village of Quelb. One of the Warriors of Dawn.
Ghido
An ancient sage, who happens to be a tortoise. He has a very dry wit and loves to pick on Bartz. 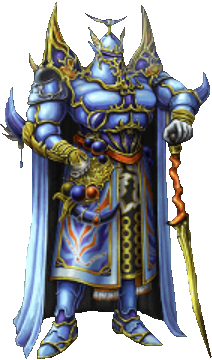 The main villain and Final Boss of V. "Exdeath" was once a tree in the Great Forest of Moore which was used as a prison for evil souls to inhabit. Eventually the souls merged into the form of the warlord seen in the game. Exdeath's eventual goal is to control the Void Between the Worlds and erase everything. 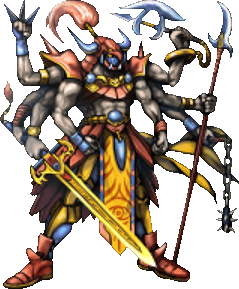 “Enough expository banter! Now we fight like men! And ladies! And ladies who dress like men! For Gilgamesh...it is morphing time!”
Voiced by: Kazuya Nakai (Japanese) and Keith Szarabajka (English) [Dissidia, World of Final Fantasy and various media]

Exdeath's Number Two for Brains. An enthusiastic warrior who challenges the party several times throughout the story.

Demons of the Rift
When Exdeath sought to obtain the power of the Void, he released the legendary demons of the Interdimensional Rift, some whom he sent out into the world to stop the Warriors of Light, others guarding the way to the center of the Void, should the Warriors of Light make it inside. According to them, the demons of the Rift believe Exdeath would create a new world of darkness for them to inhabit.
Enuo
The original evil. A dark wizard who 1,000 years before the events of the game nearly destroyed the world and whose defeat caused the world to split in two.

The backbone of Final Fantasy V, these warrior spirits are acquired through the shards left behind after Exdeath breaks each successive Crystal.

Most of the new jobs would return in Ivalice Alliance after the Job System was retired from the main series; only Blue Magic had a regular role between the SNES and PlayStation 2 era. Time Mage, Samurai, and Chemist made a rare appearance in X, and a few others were included in X-2 as an homage to the classic games. Others made it into the MMOs as support classes.
Freelancer
The "base" job of the game. All of the characters start out as one. 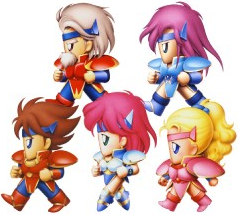 Defenders of justice, protectors of the innocent. The quintessential Good Guy and a master swordsman, charging into battle in gleaming heavy armor. They provide some added muscle in the early game, as well as some nice equipment options. 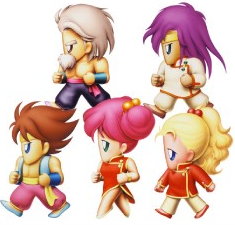 Tighten your black belt and focus your chi. As a damage-dealing machine, these bare knuckled fighters can take down even the most powerful monsters with naught but their fists. 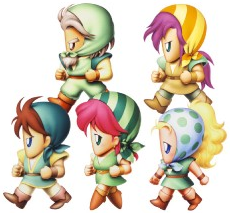 These nimble rogues run circles around foes, whilst pilfering valuable items from them. 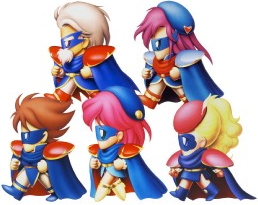 V introduces this unique Mage. Instead of the standard Black, White, and Summon magicks, they study the techniques of enemies. 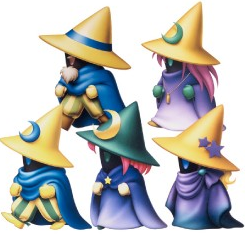 The now-iconic Black Mage is a master of attack magic. In the hands of a patient player, they are fairly useful to the end. 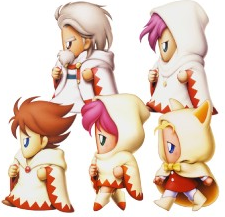 White Mage is the premier user of support magic. Unlike Black Magic, White Magic is essential to surviving the game. 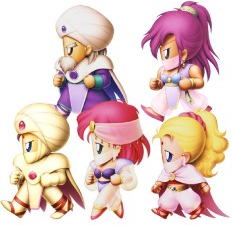 These warriors have the ability to enchant their weapons with magic to exploit elemental weaknesses, inflict status ailments, or drain HP or MP. 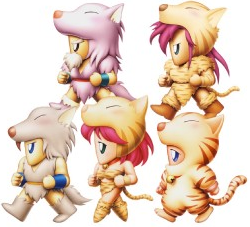 These fur-clad heroes smash enemies with their axes and hammers, without pausing for commands. 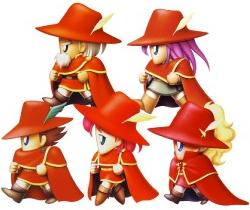 These scarlet-clad, scabbard-wearing wizards are equally adept at magic and combat. Like in Final Fantasy I and III, they can learn low-level Black or White Magic, but V sweetens the pot by adding the Dualcast ability. 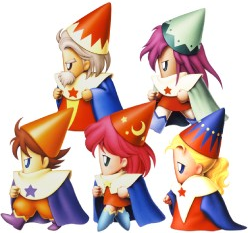 Masters of time and space, able to speed up allies, slow down foes, rewind time to the beginning of a battle, and summon meteors. 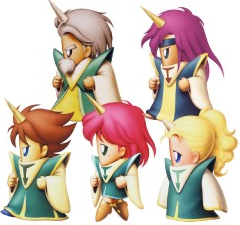 These mages call upon magical creatures, ranging from the humble Chocobo to the Dragon King Bahamut. 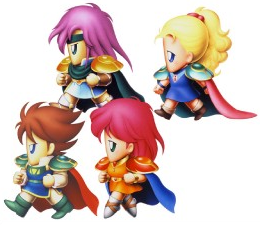 The Mime is the hidden class in the original FFV, found in an optional sidequest in the third World. It's a seemingly weak job which can't do anything but Mimic the last move by an ally, but they're much stronger than expected... 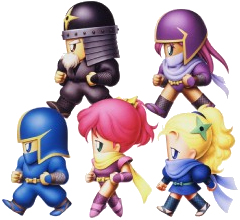 Stealthy warriors who can hold two weapons, throw them, or create illusions. 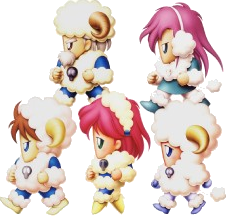 Beastmasters are trained to keep monsters under control. They can also Catch monsters and Release them in future battles. 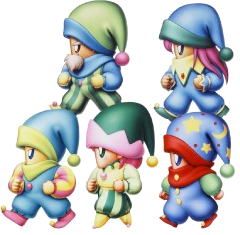 Magi of the earth, they use the environment to wreak havoc on foes. They use bells in battle. 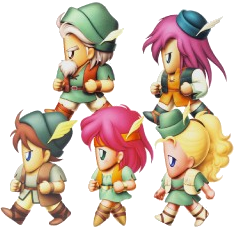 This job and the Bard are of the Fire Crystal, but they are found separately, coughed up by a Black Chocobo after the Crystal breaks. They specialize in ranged assaults and forming alliances with woodland creatures. 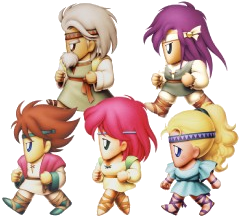 This job is acquired alongside the Ranger. While their stats are nothing to write home about, their repertoire can stop all manner of enemies in their tracks.

These honorable warriors from faraway lands can block attacks with their bare hands, as well as hurl money at the enemy for surprising damage. 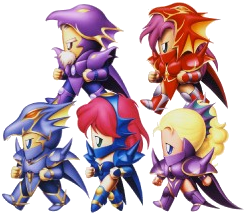 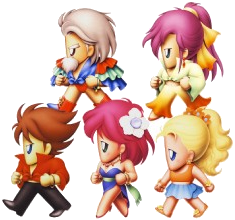 A kind of Ascended Extra from Final Fantasy III and IV. (There were put into those games to add a whimsical element; just there for laughs and entertainment purposes.) This class uses deadly dances to defeat foes. 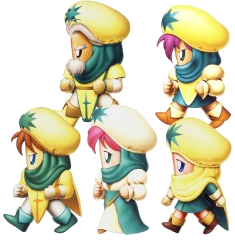 These intrepid alchemists are a rather oddball job. They rely heavily on item crafting.

Secret characters who appear in the GBA and iOS versions. The first three can be found after unsealing all 12 Legendary Weapons, which causes a fissure to appear under the sea. The fourth one, however, can only be won by beating Enuo.
Gladiator

Disciples of war, this class has the second-most diverse weapon selection behind the Freelancer. The Gladiator debuted in Tactics Advance, and most often appears as a Bangaa class. (Bangaa being the most physically-fit species in Ivalice.)

This class uses more modern armaments: a cannon primed with magical shot. They would soon reappear in Tactics A2 as a Bangaa job.

This harbinger of good and bad fortune can peer into the future. The Oracle is another casting class, but unlike every other spellcaster, they initiate a ticking clock.

Avatar of death and practitioner of the dark arts. They were supposed to debut in Final Fantasy XI but were scrapped. Necromancer is only playable here; they don't show up in other mainline games.