A subpage for Felix the Cat characters who debuted in the Joe Oriolo part of the series.

open/close all folders
The Magic Bag of Tricks 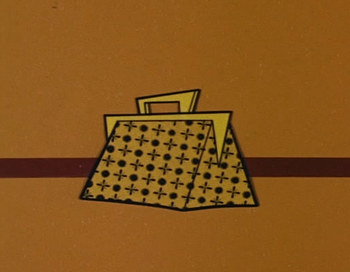 Whenever he gets in a fix, Felix reaches into this. This magical trinket is Felix's most prized possession, a magic bag of unknown origin that can do virtually anything Felix wants or needs it to be, whether its spawn an escalator, turn into a fully functional aircraft, become a portal to Mars, and so on. While the bag mostly serves as a prop, several episodes imply that it has a degree of sentience to it. The Professor is intrigued by the bags versatile nature and frequently wants to steal it from Felix so he can use it for his own ends—fortunately, the bag willingly refuses to serve him in the few times he's even able to snatch the bag for himself.

The bag also made appearances in The Twisted Tales of Felix the Cat, where it once again serves as a helpful prop, but in the episode "Viva Lost Wages", Felix's relationship with the bag of tricks is played as a romance.

Despite being one of the most famous parts of the Felix series, it wasn't there from the start—it was introduced in the 1950's Joe Oriolo cartoons, 40 years after Felix made his cartoon debut. Word of God has it that the polka dot patterns of the bag were based on some wallpaper in Joe Oriolo's house. Some of the cels of the Magic Bag even had pieces of said wallpaper glued to them!

The main foe of Felix in the Trans-Lux TV cartoons, The Professornote occasionally referred to as Professor Nutmeg is an eccentric, grouchy mad scientist. His modus-operandi in life is to steal Felix's magic bag of tricks for his own use—stubbornly failing to accept throughout the years that the bag will not work for anyone but Felix. He also tends to commit heists for monetary gain, sometimes with the help of his lackey Rock Bottom, but Felix is always around to stop them. With all that said, he won't be giving Lex Luthor a run for his money—he's barely a threat to Felix at all, and has never scored a real victory over him. And he doesn't seem to take the rivalry all that seriously either—on occasion, he'll put aside his animosity towards Felix and hire him as a babysitter to watch over his nephew, Poindexter.

Tropes associated with The Professor: 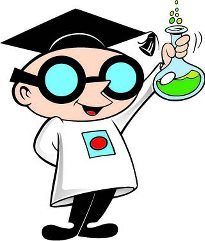 The nephew of The Professor. In contrast to his eccentric, grouchy uncle, Poindexter is very benevolent and kind, even if he has an occasional bratty streak that gets the better of him. He is also gifted with a brilliant mind for a child his age, with an incredible IQ of 222 and impressive technical and scientific skills. While he does help his uncle in his schemes to steal Felix's Magic Bag of Tricks willingly, he's also a lot more chummy with Felix himself most, if not all, of the time, and he'll just as often work against his uncles schemes to help the cat. Felix tends to get hired as his babysitter on nights where Professor wants to go out on his own. 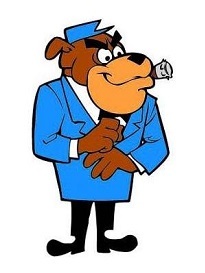 The Professor's sidekick (at least when Poindexter isn't around or when he's with Felix) and occasionally a lackey for Master Cylinder, who happens to be a bulldog. He's a shameless crook and bully. He's not exactly a thinking fellow and he almost always takes every word the Professor says seriously. 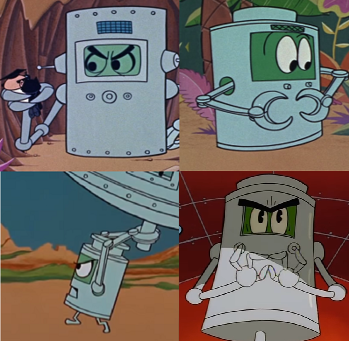 A cyborg that resides inside of the moon (sometimes moving to the planet Venus and Mars), where he reigns supreme as King. He was initially a pupil of the Professor until his original body was destroyed in a chemistry lab accident, leaving him a disembodied brain contained within an electro-mechanical body. He briefly served as a minion for the Professor during Felix's younger years, but he eventually left of his own accord to become the self proclaimed King of the Moon. Personality wise, he is an arrogant, nasty and cold blooded egomaniac, often kidnapping Poindexter to further his own ends and even wishing to experiment on Felix in his debut, and he even goes as far as trying to destroy the earth in one episode for the heck of it. He is such a threat that both Felix and Professor are at his mercy whenever the encounter him. And whereas Professor varies between foe and uneasy ally to Felix, Master Cylinder is almost always evil and hostile towards him. He's occasionally shown to have a mutual relationship with his former mentor Professor, but even then he tends to turn his back on Professor to further his own ends. In some episodes, he has a minion in the form of a helmeted squid alien named General Klaang.

In Felix The Cat: The Movie, The Duke of Zil built a Master Cylinder of his own to command his legions of Cylinder robots, presumably inspired by the one in Felix's own dimension (who has his own profile in the Felix Movie section).

Tropes associated with the Master Cylinder: 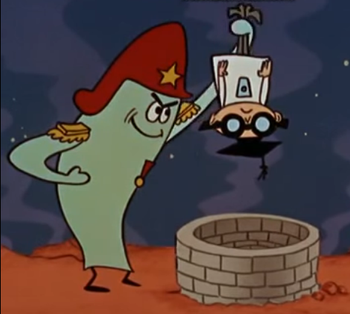 A minor recurring villain, he is an alien who serves as a lackey for Master Cylinder. 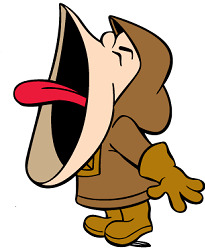 A little Eskimo with a voice loud enough to literally knock over trees! Named after the sound he makes whenever he opens his mouth. He's mostly a neutral character who acts of his own accord, but Felix is on good terms with the little guy.

Apparently, Joe Oriolo based him off of his own son, Don Oriolo, who once got into a bad sneezing fit that was once so loud, it startled Joe enough to make him fall over in his chair!

Martin The Martian (AKA Marty) 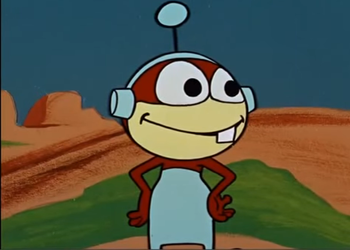 Martin the Martian (later renamed Marty) is a minor recurring character in the Joe Oriolo Felix cartoons. He is a friendly alien who likes travelling by using his 4th Dimensional Space Capsule (a transparent cube) and tends to help Felix whenever he's in the clutches of Master Cylinder. He is also on good terms with Poindexter, who had already met Martin well before Felix did.

And no, he's not related at all to Marvin the Martian (who was unnamed in his original cartoons) 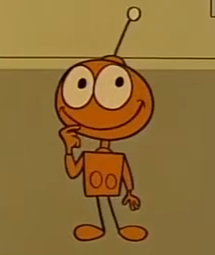 A lone martian that Felix encounters in one episode, having crash-landed his flying saucer outside of the cat's house. Should not be confused with Martin the Martian.

Two oneshot characters who both essentially serve the same role. They're both friendly martians who Felix encounters while dealing with the Master Cylinder and General Clang, disguising themselves as ordinary objects to help Felix against the villains.

Gulpo, King of the Blobs 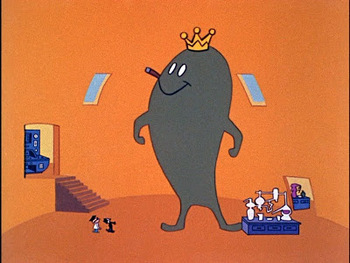 A oneshot villain who appeared in Felix Babysits. He is a large amoeba and the self proclaimed "King of the Blobs". He tries to eat Felix after he's been shrunken down to microscopic size. 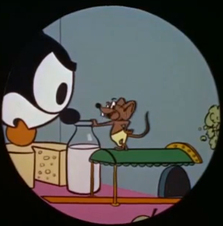 A little mouse who invades Felix's home and steals his food. 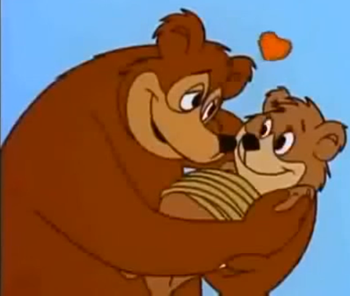 Big Brownie is a giant brown bear who lives out in the wildnerness. He briefly scares Felix and Bart, the owner of a ranch, and Bart tries to do away with him. It quickly becomes apparent that Brownie ultimately means well. He also raises a little cub (introduced in "Out West With Big Brownie"), who Poindexter nicknames Little Brownie. 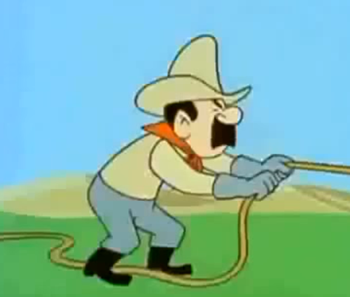 A ranch owner who Felix and Poindexter briefly hang out with, who wants to get rid of Big Brownie the bear, understandably out of fear of him and out of anger for him unwittingly terrorizing his ranch.

King Barney, King of the Leprechauns 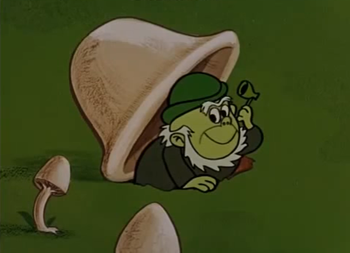 A friendly little leprechaun and the king of the leprechauns. He seeks out Felix's help whenever Professor and Rock Bottom try to get his and his peoples pot of gold. 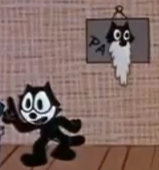 A relative of Felix, presumably his grandfather, who can been seen in a portrait in a couple episodes. 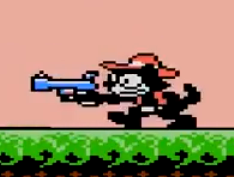 A oneshot foe from the NES tie-in game. He serves as the boss fight for World 5. 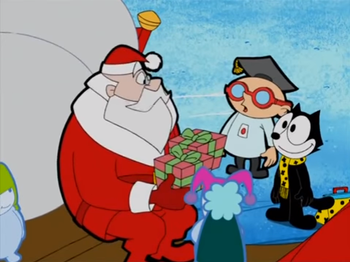 "And for you, Felix and Poindexter, a small token of thanks from all the children of the world."
Debut: Felix the Cat Saves Christmas (2004)

The jolly old elf who delivers toys to kids all over the world. Felix is forced to help him out in one adventure when Professor tries to sabotage his annual present deliveries with a weather control machine.