The characters of Fate/Extella: The Umbral Star and its sequel Fate/Extella Link, a Spin-Off subseries to Fate/EXTRA. For their appearances in Fate/EXTRA its sequels, and its spinoffs, please see here. 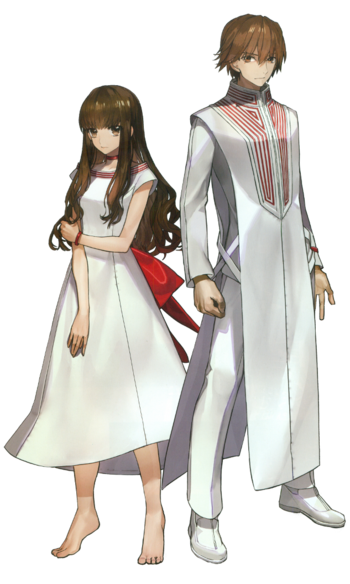 The protagonist of Fate/Extra and Fate/Extra CCC. They are the winner of the Moon Cell's Holy Grail War. 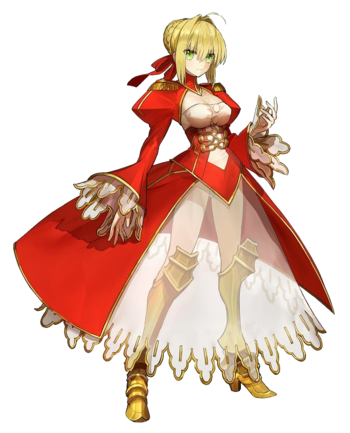 The Fifth Roman Emperor. She had the reputation of a notorious tyrant whose rule was made up of schemes and poison as she oppressed all religious forces, especially Christians, and the Roman Senate during the period from 50 to 60 AD. One theory has it that the Book of Revelations was written as a reaction against said oppression.

She and "her" Hakuno were the official winners of the Moon Cell Holy Grail War, and is the leader of her faction. 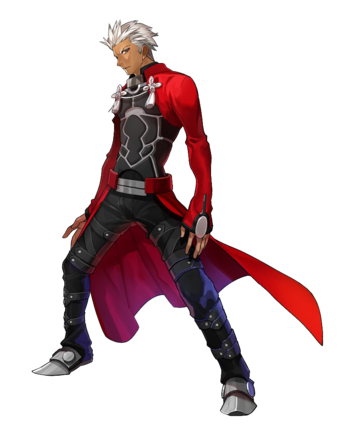 A nameless hero, born from a contract between the Moon Cell and a wannabe Hero of Justice. Nero and the others have no idea who he is but they'll accept anyone who's willing to help.

He is Nero's lieutenant.

One of the Knights of the Round Table from Arthurian legends. One of the longest-serving knights, a devoted knight who served until the conclusion of the king's fight. Possessing the holy sword of the sun, said to be Excalibur's sister-sword, he won fame as a peerless knight who was unmatched during daytime thanks to the blessings of a saint. 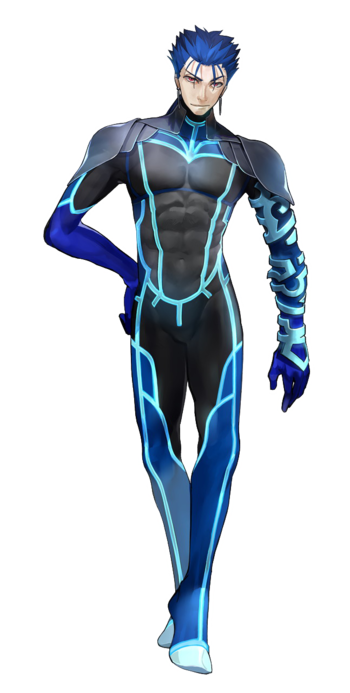 The Hound of Culann and a central figure in the Ulster branch of Irish myth. 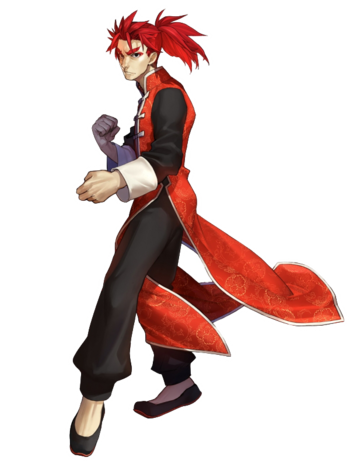 A Chinese martial artist whose skill in the art of Bājíquán was so advanced that it was said he could slay any opponent with a single blow. Though he is famed as a Lancer, his Master elected to summon a younger version for compatibility, and for his Servant's ferocity and unquestioning impulse to fight during his youth. 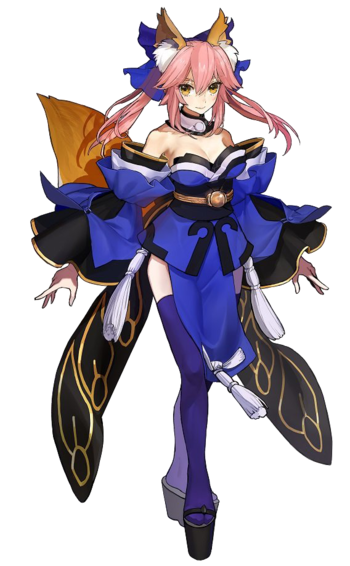 An aspect of Sun Goddess Amaterasu, Tamamo was incarnated as a kitsune and became a courtesan in the Heian period of Japan. She's the leader of her faction, showing up one day with her own Hakuno, contesting Nero over rule of the Moon Cell. 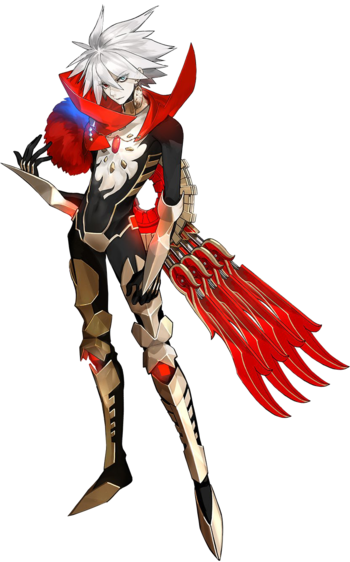 The invulnerable Hero of Mahabharata and son of the Sun God Surya. He is Tamamo's lieutenant. 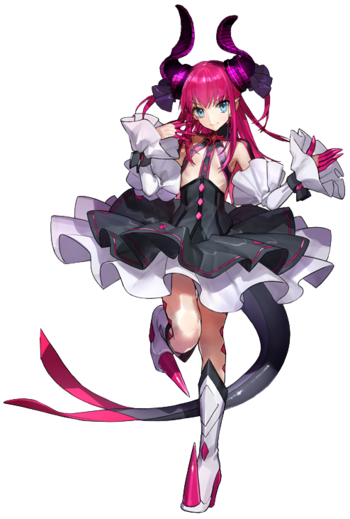 The Countess of Blood from Hungary. 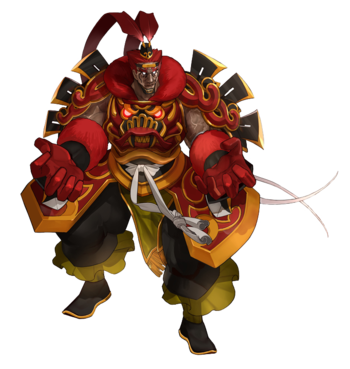 The General of Repetition, and the greatest warrior of the Three Kingdoms. 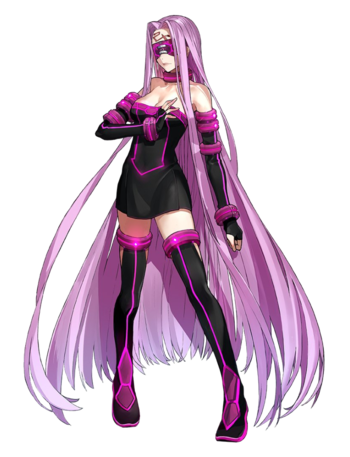 The youngest of three sisters from the Shapeless Island in Greece. She isn't really a hero, but an anti-hero. 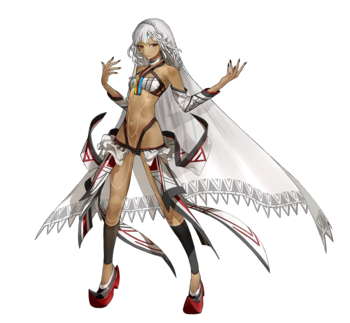 A great king who established a great empire. A descendant of the Xiongnu (Hunnu), she is a warrior and king of the Hun tribe. A great hero from the 5th Century who controlled a vast territory, spanning from West Asia to Russia, Eastern Europe, Gaul. It can be said that she invited the collapse of the Eastern Roman Empire. With outstanding power of intuition, she stand against all circumstances without abandoning her reason. A proud, rational warrior.

She leads her faction, bent on destroying the Moon Cell and civilizations. 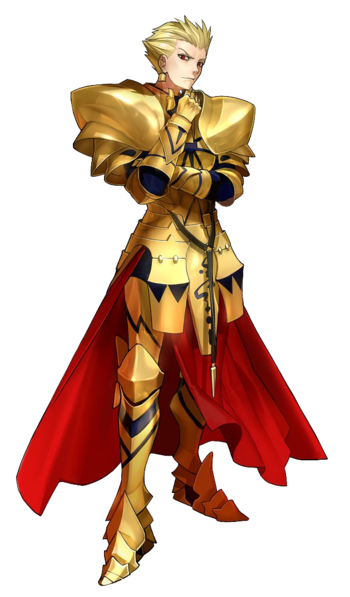 Hailing from 2600 BC Babylonia, Humanity's Oldest Hero and the King of Heroes. He is Altera's lieutenant. 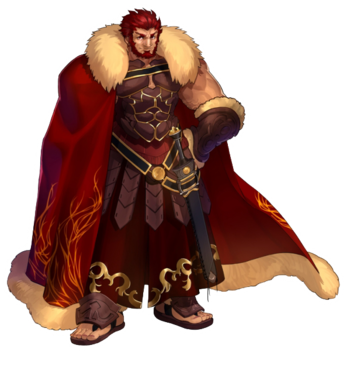 The King of Conquerors who ruled over a huge portion of the world in his glory days. For his deeds and power, he was chosen as a Top Servant by the Moon Cell, meant to fight and defeat those who pose a direct threat to the system. However, his encounter with one such threat, Altera, has intrigued him enough to stand by her side. 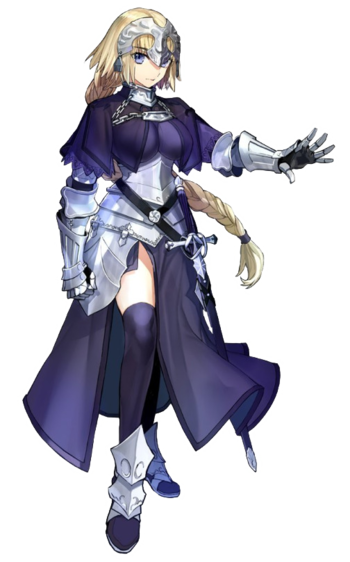 One of the most famous Catholic Saints in the world, the Maid of Orleans. She led the French in the 100 Years War against England, but ultimately burned at the stake, accused of being a witch. For her deeds and power, she was chosen as a Top Servant by the Moon Cell, meant to fight and defeat those who pose a direct threat to the system. However, her encounter with one such threat, Altera, has intrigued her enough to fight by her side. 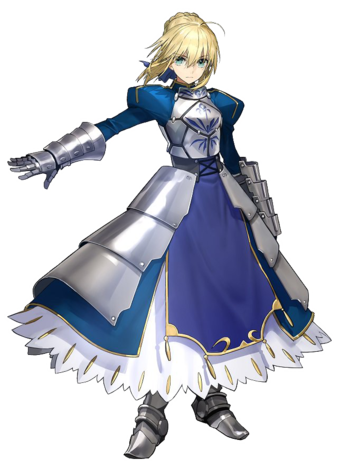 She is the "Once and Future King" and a legendary hero of Britain, known as the King of Knights. She wielded the sword from the stone, Caliburn, but it was eventually stolen. She later obtained Excalibur and Avalon from the Lady of the Lake.

She fights to stop the conflict between the three factions. 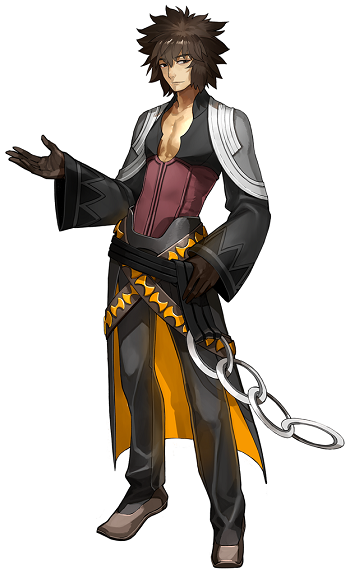 Archimedes is a Servant that was charged with the task of guarding SE.RA.PH. He was chosen by the Moon Cell as an administrator based on the merits of his logic and impartiality, skills and unchanging opinions. Because of this task, he cannot participate in the Holy Grail War and while he can fight, he's watching the factions closely to see which one will win domination of the Moon Cell.

Click Here to see Saber Venus. WARNING!: Slightly NSFW due to the stripperiffic nature of her outfit 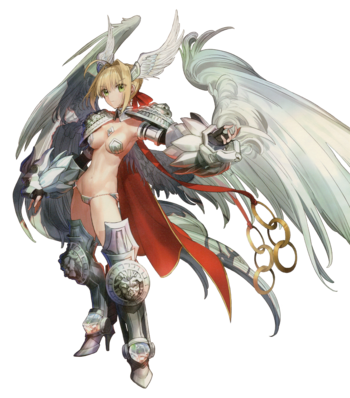 Nero after getting a power-boost using Altera's Noble Phantasm. 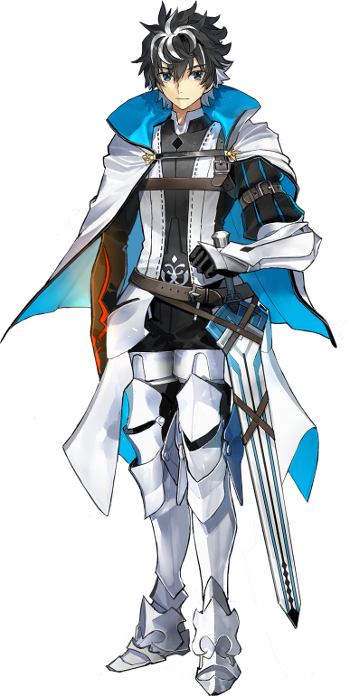 The King of the Franks who managed to unite most of Europe in the Middle Age and the leader of his Twelve Paladins. Or rather, the fictional character based on and named after him that appears in the famous French epic poem, The Song of Roland. 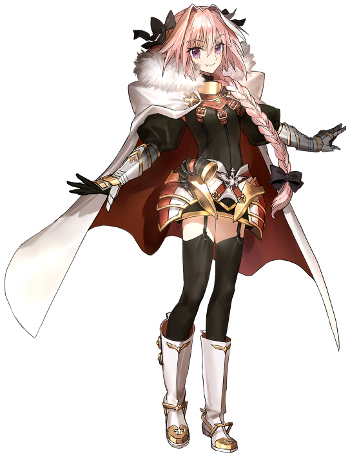 Charlemagne's Twelfth Paladin, a knight who's beautiful beyond compare and also quite the blabbermouth.

A hedonistic yet legendary female pirate who roamed the British seas, looking for treasures. During the previous Moon Cell Holy Grail War, she was summoned by Shinji Matou. 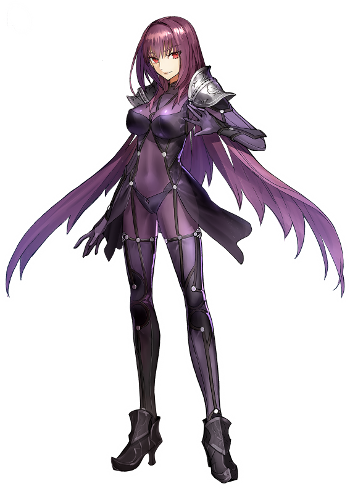 The Witch of Dun Scaith from Celtic Mythology, ruling the Land of Shadows and known as an expert in spear combat as well as being unable to die. She was also a mentor of Cu Chulainn. 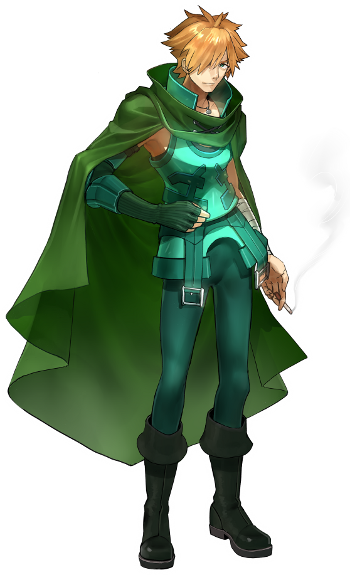 A chivalrous outlaw thief, stealing from the rich and giving to the poor and a master of guerrilla tactics. During the previous Moon Cell Holy Grail War, he was summoned by Dan Blackmore.

The hero of the Mahabharata, the third of the Pandava brothers, disciple of Krishna, Karna's arch-rival and half-brother. Despite his title 'The Rewarded Hero', Arjuna held a darker secret which made him look less chivalrous than Karna, something that troubled him. 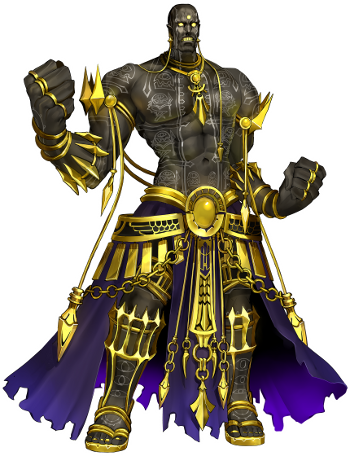 The king of Persia and rival to Iskandar. 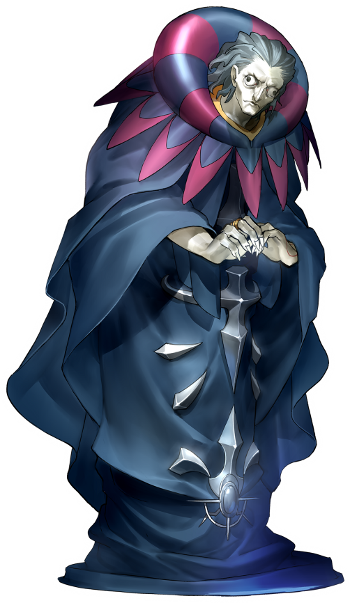 A French nobleman that used to be an ally of Jeanne d'Arc, until her death drove him to insanity and he turned towards the occult and dark magic, becoming an infamous Serial Killer that preyed on children. 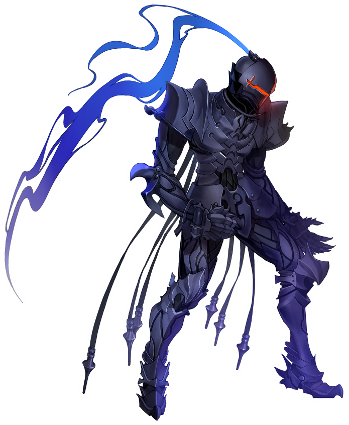 One of the Knights of the Round Table, titled the "Knight of the Lake". Lancelot's affair with Guinivere, Artoria's wife, eventually caused him to betray Camelot and accidentally triggered a chain of events that would culminate into the Battle of Camlann. Lancelot arrived too late to participate, and with Artoria dying he fell into despair and madness. 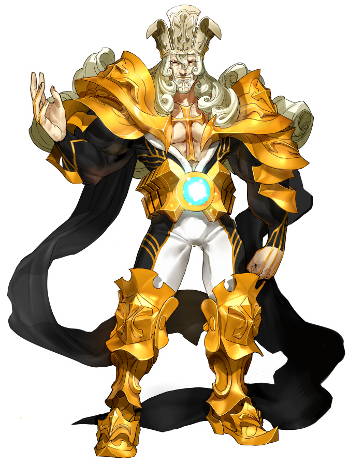 The real King of the Franks that managed to unite most of Europe in the Middle Ages.

A corrupted Elizabeth Bathory, thanks to Velber Void Cells.

An advanced alien creation that tried to attack the Moon Cell and Earth 14,000 years ago by sending one of their superweapon ships, the White Titan, Altera as their vanguard.