This page lists characters from Fate/Apocrypha that do not fit in any of the previous categories. To head back to the main character index, go here.

The original Master of Assassin of Black, he tried to summon Jack the Ripper by re-enacting one of Jack's prostitute-killings using his live-in girlfriend Reika as the victim. Instead, Jack designates Reika as her master, crippling and eventually killing Sagara to give Reika control over his command seals.

Voiced by: Tomohisa Aso (Japanese), ? (English), José Luis Orozco (Latin American Spanish), Juan Carballido (European Spanish), Robert Dubois (French), Riccardo Rovatti (Italian), Erich Ludwig (German), Luiz Nunes (Brazilian Portuguese)
The head of the Department of Summoning in the Mage's Association. He is a short old man, straight-backed and the creases on the skin of his face gleam as if he were a statue carved of wood. He is said to have held his position for over fifty years, but no one is certain of the fact. He has a number of items in his collection, including a skull that looks like a chimera of ape and elephant, a scroll over one thousand years old, and a preserved juvenile hydra. He personally hires Kairi Shishigou, and although he tries to pass it off as a forgery, reluctantly parts with the hydra as part of the payment.

The brother of Sola-Ui Nuada-Re Sophia-Ri and the successor of the head of the Department of Evocation. He is considered to be one of the first-class instructors employed by the Clock Tower. He is noted to be young and handsome with red hair, and a single glance shows a strong, high-minded gaze, refined features, and strong sense of duty in his words that place him as a member of the elite. He is confident in his ability to acquire powerful catalysts in a short time.

The young head of the noble family of the Archibald clan.

The Golem created by Avicebron's Noble Phantasm, which goes berserk when Avicebron dies almost immediately after activating it.

The dragon slain in legend by Siegfried. It was his blood that Siegfried bathed in order to obtain the Nigh-Invulnerability of the "Armor of Fafnir" Noble Phantasm. 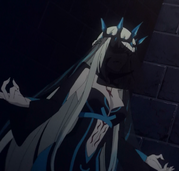 The sister of King Arthur and the mother/aunt of Mordred. Firstborn of Uther Pendragon and Arch-Enemy of her younger sister, she was the one who caused Arturia to lose Caliburn, sent Sir Agravain to the Round Table as an assassin, and conceived Mordred from Arturia's "sperm" (blame Merlin for that) and her own ovary. It was through her machinations that Mordred ultimately fell down her path and brought ruin to Camelot.

Head of the Matou clan, one of the three founding families of the Holy Grail War and one of the original creators of the ritual itself. He participated in the Third Holy Grail War and battled Darnic Prestone Yggdmillennia, but lost and was unable to prevent the Nazis from taking the Greater Grail from Fuyuki.

The Lancer servant who Darnic summoned during the Third Holy Grail War.

The Amazon Queen that became a rival of Achilles and slain by him. She appeared only in the Light Novel via a flashback.

A knight who had fought alongside Jeanne d'Arc during The Hundred Years War, before going mad and turning into a Serial Killer after her execution. Toward the end of the Grail War, Caster of Red summons him in an attempt to manipulate Ruler. He was the Caster-class Servant who participated in Fate/Zero, but here he is a Saber.

Scrapped Characters
All four of the characters listed here were revealed in supplementary materials when the game project was first scrapped. They were slated to be Servants in the released version of the game, but once the novels came out and had to pare down the Servants to "merely" 14, these four were cut. 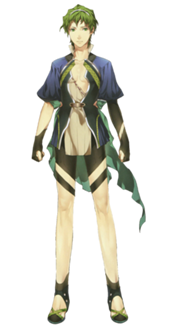 The mythical King of Israel summoned as an Archer class Servant. As in the original Old Testament scriptures he has a weakness for beautiful women.

His Noble Phantasms are "Hamesh Avanim: The Five Stones", a sling that can knock the opponent unconscious and lock their weapons from use with every fifth shot; "Sacrifice: Flames upon the Altar", an incense burner that can call down divine flames to kill the opponent; and "The Ark: Chest of the Covenant", the Ark of the Covenant, which will kill anyone besides David who touches it. 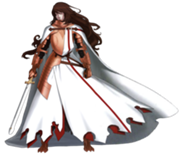 The Patron Saint of England summoned as a Rider-class Servant. His slaying of a dragon gives him an advantage against Servants with draconic attributes.

His Noble Phantasms are his sword "Ascalon: The Blessed Sword by which Force is Slain", a sword that can block any attack or pierce any defense; "Abyssus Draconis: Thou Shalt a Serpent Become", which imposes a Dragon affinity onto the target; "Interfectum Dracones: Dragon Slayer", an attack that fires lances of light and is especially deadly against dragons; and "Bayard: The Phantom War Horse", who can negate projectile attacks and nullify a single lethal attack against his rider. 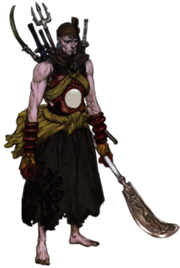 The legendary warrior monk who served Minamoto no Yoshitsune. Actually not Benkei at all but Hitachibou Kaison, another warrior who served Minamoto. After fleeing from a battle and leaving Benkei to die, Kaison was overwhelmed by guilt and assumed the former's identity. He is summoned as Lancer. 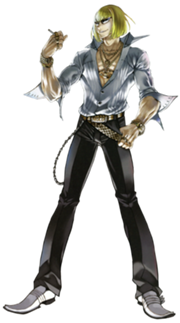 One of Minamoto no Yorimitsu's Four Heavenly Kings, also known as Kintaro. He is summoned as a Berserker-class Servant.

His Noble Phantasms are "Golden Eater", an enormous axe loaded with lightning cartridges, and "Golden Spark", which uses three of these cartridges to loose a lightning bolt to mow down enemies.

The "terminal" of the greater Grail, modeled after the first Einzbern Homunculus. For more detailed info on her, see the Fate Stay/Night character sheet.