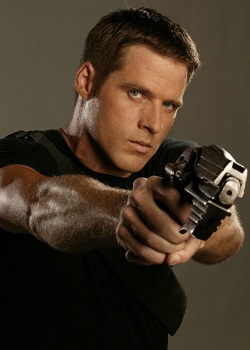 "Boy, was Spielberg ever wrong. Close Encounters my ass."
Played By: Ben Browder
"Once upon a time, there was a boy named John, and John was an astronaut. He lived in a far away place called Earth, which is so far away you've never heard of it. One day, when John was out doing astronaut things, a big, blue wormhole gobbled him up and spat him out at the far end of the Universe."

A human astronaut testing a new theory created by himself and his friend about using a planet's gravity to accelerate a space vessel's speed, John Crichton accidentally opens a wormhole leading to a distant part of the galaxy, stranding himself amongst alien lifeforms. Rescued by the escaped prisoners of Moya, and discovering that the Sebacean Peacekeeper Captain Crais wants to kill him because his brother died after crashing into Crichton's ship, Crichton finds himself wandering the galaxy aboard Moya in pursuit of a way home. Crichton's mantra could well have been "Death Is Cheap", to the extent that he died no less than seven times—not counting numerous deaths in parallel worlds. 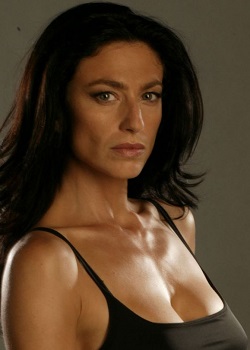 A Sebacean Peacekeeper involved during the initial attempt to recapture Moya when she first escaped, Aeryn dared to speak up on Crichton's behalf when Crais captured them and was condemned as a criminal herself, forcing her to abandon the Peacekeepers and throw herself in with the escaped convicts. 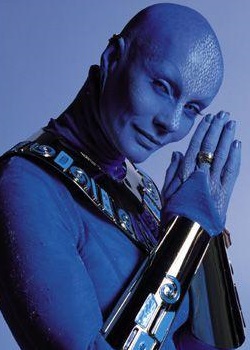 "Am I the only species in creation that doesn't thrive on conflict?"
Played By: Virginia Hey

A Delvian criminal-turned-priestess, she was imprisoned aboard Moya for the murder of her lover, a Sebacean sympathiser. 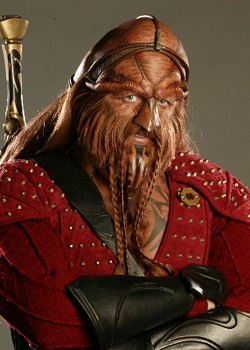 "I will not be taken prisoner again!"
Played By: Anthony Simcoe

A male Luxan warrior who was sentenced to imprisonment for the crime of killing his Sebacean wife, a crime actually committed by his brother-in-law and the truth of which was ignored for his having dared to marry a Sebacean and have a half-breed child. 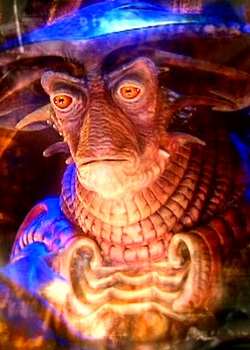 "When one of my species is bonded to a Leviathan, we give our lives to the service of others. Ship first, then those who travel aboard her."
Played By: Lani Tupu

A member of an alien species that can only travel by being physically and mentally bonded to the biomechanoid ships known as Leviathans. As Moya's Pilot, he directs her in their travels through the stars. 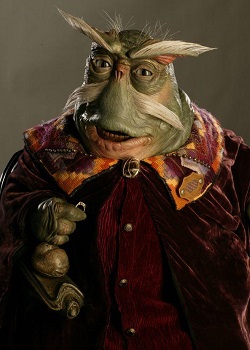 "If you must address me, do so as Your Supreme Eminence. Which you should be doing anyway."
Played By: John Eccleston, Sean Masterson, Tim Mieville, Matt McCoy, Mario Halouvas & Fiona Gentle
Voiced By: Jonathan Hardy

Once the Dominar of the Hynerian Empire, ruler of over six hundred billion subjects, Rygel was deposed by a cousin of his and sent into Peacekeeper custody over a hundred cycles before the start of the series. 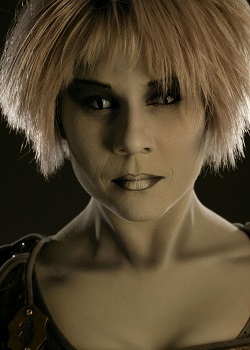 "I say we just go get the guns and go steal the stuff."
Played By: Gigi Edgley
If your hand is still there in one microt, I'll snap it off and use it as a good luck charm.

A female Nebari who tried to flee her highly conformist, oppressive culture and escape, only to be recaptured. When Moya accidentally crashed into the prison ship carrying her, she and her two captors were forced to stay aboard. When events left her the sole survivor, she gladly fled with the crew of Moya to avoid the neural reprogramming awaiting her if she returned to the Nebari. 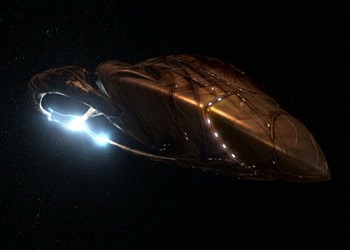 A massive biomechanical lifeform that takes the form of a spaceship, Moya is a Leviathan that has been designated as a prison transport. When her latest cargo rebelled and escaped, she happily switched her loyalties to them. 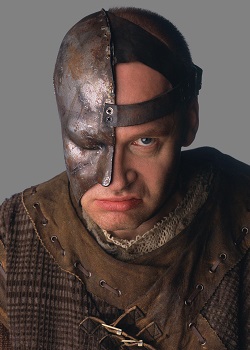 A Bannick who is part humanoid and part Energy Being, he has the power to heal mental torment and to comfort the dying as they pass over to wherever they go. Unfortunately, use of his powers always leads to some degree of Mental Fusion, resulting in gradual corrosion of his sanity. 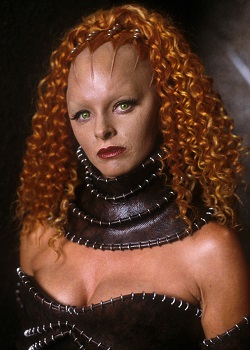 "I always wait. You know, see both sides — be reasonable. But now... I have nothing to lose."
Played By: Tammy MacIntosh

An alien gap-yah student who got into a very bad situation and ended up being rescued by the Moya crew, initially to the displeasure of both sides. 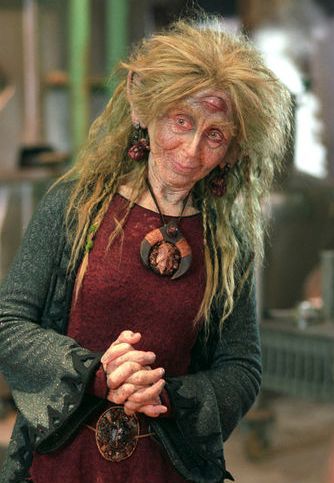 "Never bathe, never bathe. It washes off the juice."
Played by Melissa Jaffer

An enigmatic old woman with powerful spiritual abilities who took advantage of an attack on a Peacekeeper ship to escape captivity and join the crew. Nobody's quite sure whether her mercurial switches between apparent senile dementia and ruthless plotting are real or an act. 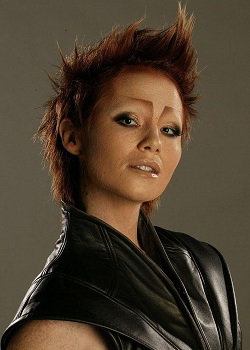 "Everything lives and everything dies, whether you wish it to or not, and you have to deal with it."
Played By: Raelee Hill

A highly-educated, cold-blooded, but over-confident space hustler who attached herself to Moya after one of her proposed deals fell through and left her stranded. Never really trusted by anyone, she forms a perverted but sincere attachment to Scorpius. 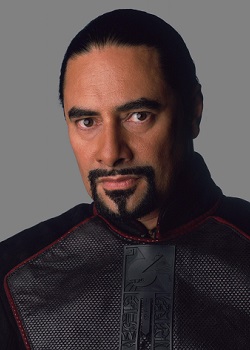 "A human? It will require some study. I will personally enjoy pulling you apart to see what you're made of."
Played By: Lani Tupu
"Tauvo is dead- struck down by a weak... pathetic...inferior being. It must be avenged! I swear in Tauvo's name, Crichton, you will die in my hands."

Leader of the Sebacean Peacekeepers who are attempting to retake Moya when John Crichton arrives, he is determined to capture them again; the prisoners for the stain on his record, Crichton for being involved in his brother's death. 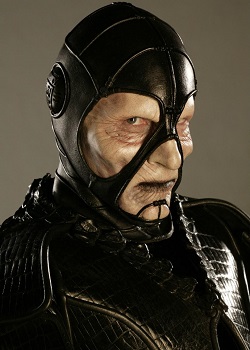 "I long ago learned the advantages of patience."
Played By: Wayne Pygram

A deformed, ruthless and surprisingly combat-hardened Peacekeeper scientist, obsessed with gaining knowledge of wormholes as a means to power. Actually a hybrid Sebacean/Scarran created by a Scarran prisoner-rape experiment, his driving force is vengeance on the Scarrans for their horrifically brutal treatment of his mother and himself. 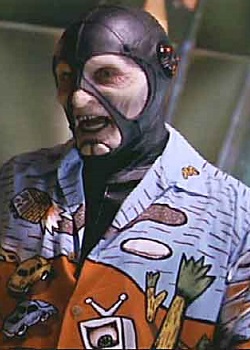 "Go on, John! Do it! Then we can go to the beach! I know a place with naked Sebacean girls and margarita shooters!"
Played By: Wayne Pygram

A neural clone of Scorpius and exists solely in the head of John Crichton. He was also played by Wayne Pygram. Harvey is the result of a neural chip that was placed into Crichton's brain by Scorpius after the Aurora Chair failed to reveal the wormhole information he was after.