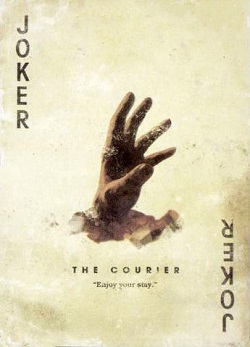 Voiced by: Yuri Lowenthal (male), Laura Bailey (female) (grunts only)
"It appears that you are both the messenger and the message."
— Legate Lanius
Advertisement:

The Courier was just a regular schmuck working for the Mojave Express. During a particularly strange delivery job, they're ambushed on the road. The ringleader of your muggers, a man named Benny wearing a distinctive checker-coated suit, steals their package (a or rather, THE Platinum Chip), puts two 9mm bullets into their skull, and has them buried in a shallow grave just outside of town.

By all accounts, they should be dead. But they aren't.

The story is driven mainly by the Courier's attempts to understand the meaning behind the attack, the significance of the Platinum Chip, and getting said Chip back to finish the job. Ultimately, the Courier gets to decide the future of the entire Mojave Wasteland and beyond.