Left to right: 0, Dala, Klein, 8, and Borous.
"It is truly the end of all intelligence when the Lobotomite speaks more wisdom than you 'geniuses'".
— Dr. Klein

The pre-War head scientists of Big MT, who were among the finest scientific minds of their generation. That was a long time ago, and they have very much gone to seed as brains in jars. They will be the first group of people — for a given value of "people" — the Courier will meet after entering Big MT.

"THE LOBOTOMITE IS ASKING ME THINGS, O, AND I AM TRYING TO IGNORE THEM. MY PROCESSORS CAN'T IGNORE YOU BOTH AT THE SAME TIME."
Voiced by: Jim Ward

The arrogant and condescending leader of the Think Tank.

"I have a gift with machines. I can render anything inoperable - preserve them in a non-functioning state."
Voiced by: James Urbaniak

A would-be roboticist with a very questionable grasp on technology, a somewhat confusing name and a serious bone to pick with Robert House.

An acoustician, 8's voice module was damaged prior to the DLC by a previous visitor. As such, he can only communicate in sound waves.

"Can't splice enough, I always say, especially if you can make a magnificent Cazador!"
Voiced by: Beau Weaver

The incredibly patriotic Head of "Animology, Beastology and DNA-Scrambling Technology" whose memories of high school plague him to this very day. He is also the former owner of Gabe.

"Shh, little organs. Go to sleep in your tanks. Dala loves you."
Voiced by: Jocelyn Blue

The Head Chief Researcher of Minerology (as well as possessing degrees in 211 other fields), Dala has a not-so scientific fascination with the human body.

A group of appliances at the Sink, the Courier's Player Headquarters during Old World Blues. Each one has their own personality.

The Stealth Suit Mark II
Voiced by: Veronica Belmont
"Hello. It's nice to meet you. Who can I hide you from today?"

The Stealth Suit has an on-board AI designed to help preserve its wearer and quickly becomes attached to the Courier. You find her in one of the labs. When equipping her, she will use stimpaks and Med-X on you as needed while also providing conversation whilst walking through Big MT. 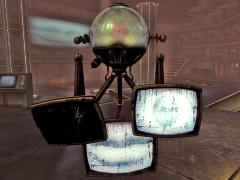 The antagonist (or so he seems) of Old World Blues, he has been threatening the Think Tank with intelligence-eating Robo-scorpions that keep them huddling in their base until he comes to destroy them. 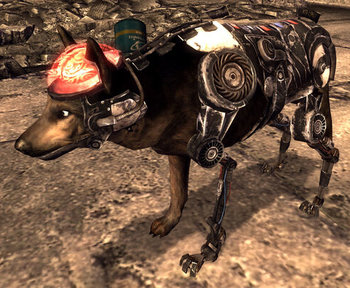 A cyberdog that you can create as a temporary companion in the X-8 Research Center. 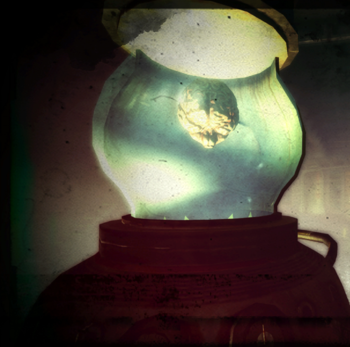 Voiced by: Sunil Malhotra
"Do you know how much more you can get done when you're not constantly looking for places to urinate? It's quite a lot, I can tell you."

Once the Courier got their internal organs ripped out on entry to Big MT, it seems one of them got misplaced. The Courier's brain was flushed away to be found by Dr. Moebius, and finding it is their main goal so the Courier can escape the area. However, it turns out it is none too happy with the idea, and before it jumps back inside the Courier's head it has some things it wants to get off its chest, so to speak. 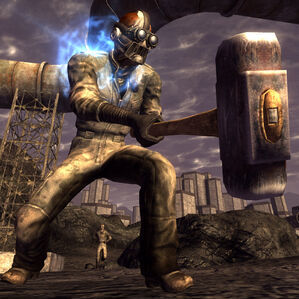 Inhabiting much of Big MT, they were once travelers or settlers of the Mojave that were abducted by the facility's satellites and unwillingly put through the Auto-Doc experiments just as the Courier was. Unlike the Courier, however, they are a result of repeated failed surgeries that left them shadows of their former selves, their brains lost or destroyed, practically turning them into mindless killing machines.

Voiced by: Jim Ward (Wild Wasteland)
"Hey, who turned out the lights?"

Motorized suits that automatically fight against anything in their path. Originally designed to recover and defend incapacitated soldiers and/or corpses, the inventions would lack direction to any home bases and end up wandering aimlessly while designating potential threats to their wearers.