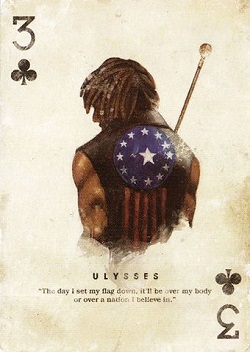 Voiced By: Roger Cross
"America sleeps. And until it's dead, I carry it. Just like I carried you. More than hope. Belief."

Ulysses is a former frumentarius for Caesar's Legion, and travelled the west scouting for them in the guise of a courier. It was he that eventually found Hoover Dam under the occupation of NCR, and drew Caesar's attentions to the Mojave. He was supposed to be the original "Courier 6" hired to transport the Platinum Chip to Mr. House, but declined the job, thus passing it on to your character.

All of that, however, is just the surface; beyond that he is one of the most mysterious characters in the game, with a "message" for you tracing back years. He acts as the central figure of the Lonesome Road DLC, and is mentioned in the previous three DLCs and the base game, building up a Myth Arc to discovering his identity and what he wants with you. 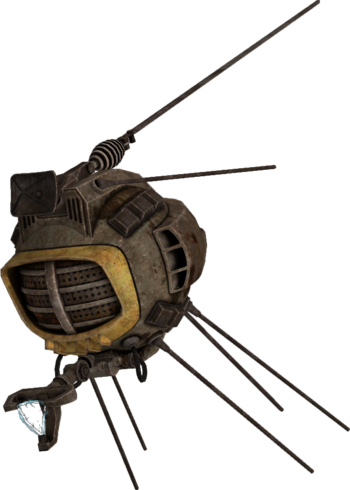 A copy of the ED-E robot found in the Mojave, remote scans of the Divide's computers scanned the original and produced this replica. While the original ED-E was heavily damaged, this one is pristine, and for his memory banks are intact. Thus he has a distinct personality and is rather emotive, though he can still only communicate in beeps.

Dr. Whitley
Voiced By: Ron Yuan (base game), Jesse Burch (Lonesome Road)
"At least I've got you to talk to, huh, ED-E?"

An Enclave scientist and the creator of ED-E, Whitley's logs are heard throughout the DLC. 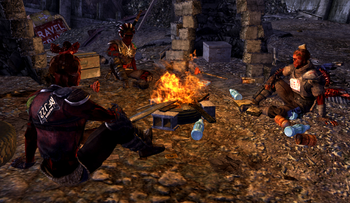 "Pain makes for strange allies... the hate the Bear and Bull shared across the battlefield, now turned against the Divide. Few survived... intact."

When the Divide was destroyed, the NCR and Legion troops fighting over the region were caught in the crossfire. The intense radiation and scorching winds turned them into something greater than ghouls — marked men. United in their agony, they fight together to keep the Divide safe from any intruders, and that means you.