This is a partial character sheet for the Video Game Fallout: New Vegas. Visit here for the main character index. Subjectives and audience reactions should go on the YMMV page. A merciless and well-organized nation of imperialistic slavers originating from Arizona in the area around the Grand Canyon. Founded by the charismatic and dangerous Caesar. They modelled their society on the Roman Empire and believe that through forced assimilation of the people that they conquer, humanity will one day all be united under the banner of the Legion, putting an end to all wars. They are currently aiming to push the NCR out of the area and conquer the Mojave Wasteland and, one day, California. 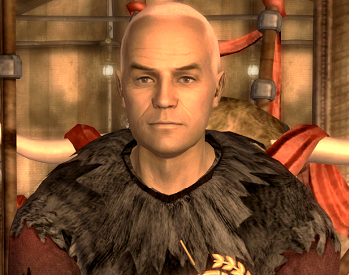 King of Clubs
Voiced by: John Doman
"I was taught it was my responsibility to bring the torch of knowledge to the wastes. I may have taken the torch part more literally than they intended."

The head of Caesar's Legion, Caesar was a former member of the Followers of the Apocalypse by the name of Edward Sallow, sent east to learn more about the communities there. Caesar found a cache of old books on Roman history and was soon inspired to use the blueprint of the ancient Roman Empire to forge a new civilization from the wasteland. He and his expedition was captured by a tribe, but Edward parleyed himself into their leader by teaching them new and better ways of fighting. That tribe defeated one rival and then another, and Caesar drove them onward to conquer all the tribes they found, forging a new power in the Wasteland: Caesar's Legion. 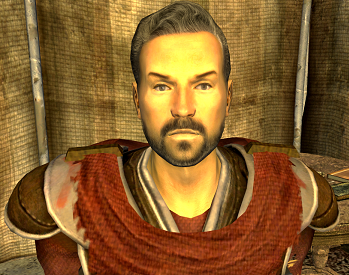 Voiced by: Yuri Lowenthal
"Unlike an NCR trooper, a Legionary is always ready to fight regardless of the circumstance he finds himself in."

The head of Caesar's Praetorian Guard, he is a master of unarmed combat and assists in training Legionaries. 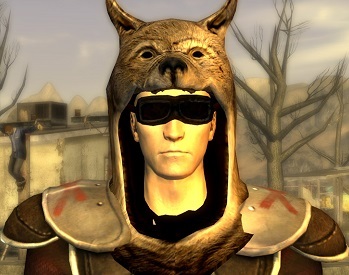 Jack of Clubs
Voiced by: Jason Spisak
"Do whatever Caesar tells you to do. And whenever the opportunity presents, strike at the Profligates. Pile body upon body."

The head of Caesar's Frumentarii, and one of the characters with a more mysterious background in the game. He's responsible for the destruction of Searchlight, the alliance with the Great Khans, the plot with the Omertas, and the pacification of the Twisted Hairs. When the Courier encounters him, he and his men have just finished sacking the small town of Nipton. 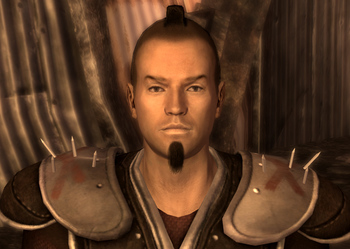 Voiced by: Yuri Lowenthal
"When the Legion showed up, we fought, most tribes did. Hangdogs hung out longer than most... broke us by throwing our dogs on the fire."

The Master of Hounds and a former member of the Hangdogs tribe before it was conquered by Caesar. His primary job is to oversee the breeding, training and care of Legion hounds, which he has done by stealing a slave girl's teddy bear to give to them as a chew toy. 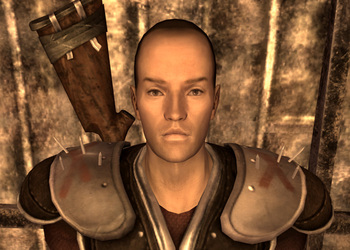 Voiced by: Yuri Lowenthal
"Remember the rules: light armor and machetes only. And, of course, to the death."

A Legionary in charge of running the arena at The Fort. If the Courier is male he'll be willing to set up fights for them against Legion slaves and even NCR soldiers. If the Courier is female... he mostly just throws insults at you and tells you to bother someone else. 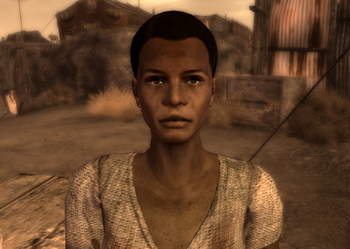 Six of Clubs
Voiced by: Lora Cain
"We're property. If you're too young or too old, the men usually leave you alone. Usually."

A slave woman who was captured when the Legion burned her hometown three years ago. She was training to be a doctor and has enough medical knowledge to perform basic first aid and make healing powders, though her recipes aren't very efficient. 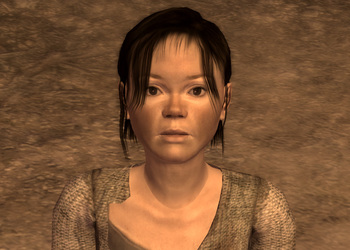 Voiced by: Ashley McGullam
"I can't talk to you. It's not allowed."

A young slave girl who has recently lost her teddy bear to the Legion's hound master and requests that the Courier bring it back to her. 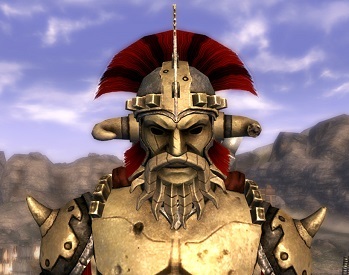 We shall see how brave you are when nailed to the walls of Hoover Dam, your body facing west so you may watch your world die.
Voiced by: Mitch Lewis
"Lanius is savage. Savagely loyal, too, but only to me - he has no love for the Legion. But this has its uses. He has no attachment to his men, no compunction about battlefield losses. All he cares about is destroying the enemy. When another Legatus or Centurion fails to achieve results, I send Lanius to make things right. His first step is to beat the failed commander to death in front of his assembled troops. Then he orders the ritual of decimatio."
—Caesar, on his second in command.

Known as "The Monster of the East," Legatus Lanius is Caesar's right-hand man and the commander of the Legion's army. 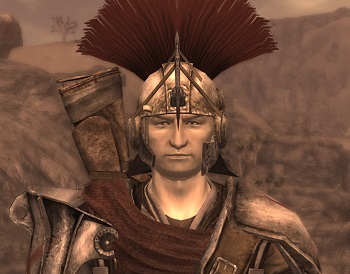 Five of Clubs
Voiced by: Yuri Lowenthal
"It is the armor of a Centurion. You have the rare honor of beholding it unsplattered by the blood of my inferiors."

A Centurion leading Caesar's forces at Cottonwood Cove. He is disdainful of the Courier at first, but will warm up to them a bit if they prove themselves as a friend of the Legion.

Decanus Severus
Voiced by: Gregory Alan Williams
"Trade with Cannon Runner if you like. Make trouble and things won't go well for you."

A legion commander with the rank of Decanus who serves under Aurelius of Phoenix as his second of command. In addition to his more mundane tasks watching over the camp he is also looking for ways to deal with the nearby NCR, something the player can assist him with if they have a high Explosives skill or the knowledge of how to make Powder Charges. 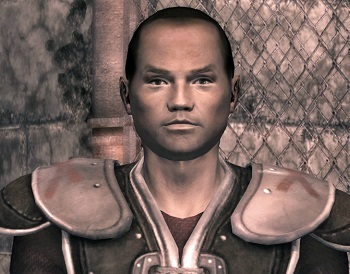 Four of Clubs
Voiced by: Shane Johnson
"They live in pitiful squalor, undisciplined, intemperate. To enslave them is to save them - to give them purpose and virtue."

A former member of the Blackfoot tribe who now serves as a Legion slavemaster. He recently acquired three new captures, a family, who he is quite eager to sell. 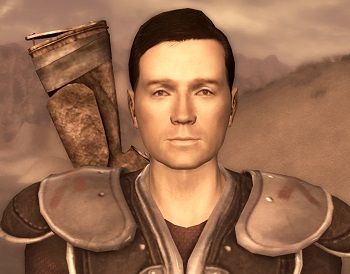 Voiced by: Ari Ruben
"Ave. Are you ready to travel to The Fort?"

The ferryman who runs the boats at Cottonwood Cove. When the player receives the invitation to meet Caesar at The Fort, he'll give them transport there and back. 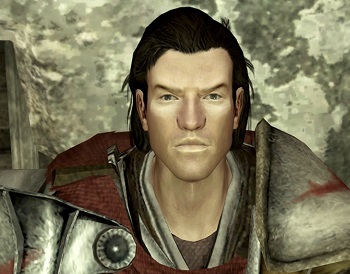 Voiced by: Jesse Burch
"What an ugly little worm you are. What pile of excrement did the lieutenant pluck you from, worm?"

A captured Legion Centurion who is being interrogated by Lieutenant Carrie Boyd at the Camp McCarran NCR military base. Unfortunately, he has so far refused to say anything worthwhile to his captors, which allows the Courier to intervene and try to get some useful information out of him themselves.

Picus
"You're getting too close, Shamus!"

Picus, also known as Cpt. Ronald Curtis, is a Frumentarius agent who has been working right under the noses of the NCR military to send important information such as troop movements to the Legion, which has led to many ambushes and deaths. He is also planning on using a bomb to destroy the monorail connecting Camp McCarran and New Vegas together, which would deal a major blow to the NCR. 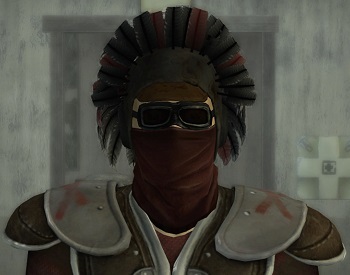 Two of Clubs
Voiced by: Gregory Alan Willaims
"The "great" republic couldn't find enough soldiers to liberate this camp, so they sent you? Pathetic."

A legion decanus from the Great Salt Lake who has conquered and holds the town of Nelson to demoralize and intimidate the nearby NCR camps. At present he has several captured NCR soldiers under his control which complicates things for the local NCR military. Depending on alignment the Courier can either wipe out Dead Sea and his legion forces or assist them in waging war against the NCR.

"You are not my Centurion! You aren't even Legion! I do not 'carry on' at your command."
Alexus
Voiced by: Yuri Lowenthal

Another decanus stationed near Nelson who has managed to capture a group of NCR soldiers and is holding them captive in the Techatticup Mine of the outskirts of the small town. Unlike Dead Sea he provides no unique dialogue and is just another target for the player to kill if they decided to side against the legion. 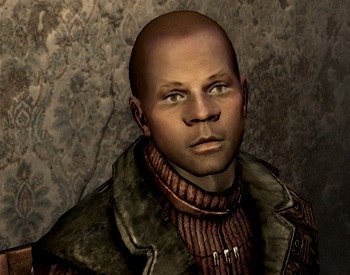 Voiced by: Gregory Alan Willaims
"Ah, the vaunted hero of the legion. What can I do for you?"

A Legion frumentarii agent sent by Caesar to find allies for the upcoming battle at Hoover Dam, which he has acquired in the Great Khans of Red Rock Canyon. Of course, all of his promises of alliance and glory are a lie to keep the Khans loyal until the legion can enslave them once they have outlived their usefulness. Luckily, with a bit of investigative work by the Courier his vile plans can be exposed and turn the Khans against the legion. 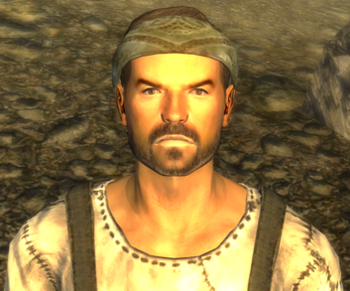 Seven of Clubs
Voiced by: Ari Ruben
"Rise and shine. You have a big day ahead of you."

An elite frumentarii agent who meets up with the Courier during the mission to assassinate the NCR president during his trip to Hoover Dam. He provides both information and support during the quest, including disguises to get past security and even a bomb if the player passes a high enough skill check. 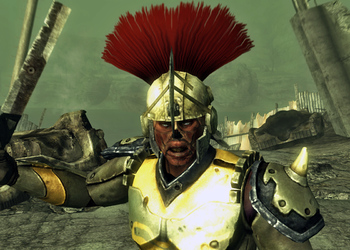 Gaius Magnus is a centurion who had conquered the 87th tribe for Caesar's Legion and had earned his signature Armor of the 87th Tribe, an armor similar to Legate Lanius. In 2281, Gaius was stationed in Dry Wells, one the home of the Twisted Hairs tribe, with his troops before the Courier launched a nuke from The Divide. After they went off, the massive windstorms flayed the Legionaries alive and turned them into ghouls within seconds. Crazed and vengeful, Gaius provides a powerful fight against the Courier in Lonesome Road.