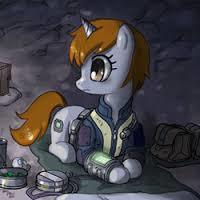 The protagonist of Fallout Equestria. Littlepip is an intelligent, young unicorn mare who has spent all of her life in Stable 2. After her idol Velvet Remedy mysteriously departs the Stable, Littlepip makes it her mission to follow Velvet out into the dangerous Equestrian Wasteland to bring her home. However, her desire to help others alters her course upon seeing the state of her homeland and she begins a new journey to restore Equestria to its former glory. Littlepip is driven by her need to help others and has a knack for hacking computer systems and lockpicking, but is a self-conscious and uncertain pony. Her Cutie Mark is a Stable-Tec PipBuck. 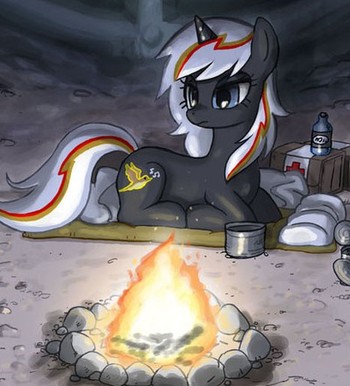 A popular singer and entertainer in Stable 2, Velvet Remedy is a unicorn who Littlepip has idolized for years. When she leaves Stable 2 to help the ponies of the Equestrian Wasteland, Littlepip follows. Velvet becomes a member of Littlepip's mismatched friends, acting as the medic, trade and diplomatic negotiator. She is a big fan of Fluttershy. Her Cutie Mark is a singing bird. 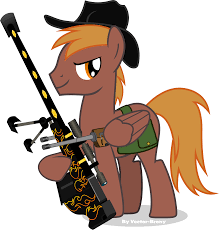 A Pegasus living in New Appleloosa, Calamity is the first true companion Littlepip meets in the Wasteland. He is very loyal to her and their later companions, acting as their gunner and uses his vast knowledge of the wasteland to guide his friends. He was exiled from the Enclave, and branded a Dashite like Rainbow Dash and Scootaloo before him, thus his Cutie Mark has been replaced with the Dashite symbol. 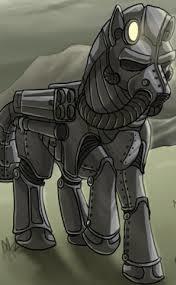 A surviving Steel Ranger, SteelHooves is a ghoul earth pony who is bound to his Power Armor thanks to being caught in the Pink Cloud released two-hundred years ago. He is a grim person, racially hostile towards zebras, but acts as the muscle of Littlepip's group. 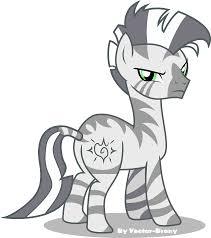 A female zebra, Xenith is introduced midway through the story as a slave in Fillydelphia. After years of abuse and turned into a gladiator, Xenith finds freedom when she meets Littlepip, becoming a member of her group. She is very sensitive to being touched due to her bad experience as a slave, but is very kind and selfless, providing her skills with zebra alchemy to aid her friends.

The first friendly person Littlepip meets, Watcher commonly appears to her by taking control of wandering Sprite Bots, offering advice and details about the events of the war. 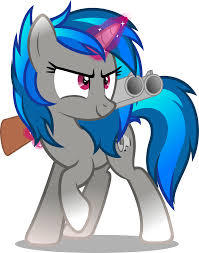 The current holder of the title DJ Pon3, Homage is a unicorn mare who lives in Tenpony Tower. She pretends to be the assistant of DJ Pon3 but speaks every day across the airwaves to bring hope but brutal honesty to the ponies of the wasteland. She is a courageous, passionate and strong-willed pony, becoming Littlepip's girlfriend over the course of the story. Her Cutie Mark is a speakerphone, which she hides to conceal her secret identity. 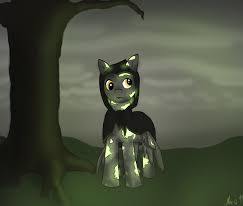 Ditzy Doo is a 200-year old pegasus ghoul who knew the Ministry Mares. Now living in New Appleloosa, Ditzy Doo runs the store "Absolutely Everything" which sells just about everything imaginable. Her tongue was cut out by Slavers, so she uses a small chalkboard to communicate. Despite her hardships and current existence, Ditzy Doo is a very friendly pony, and becomes a close friend to Littlepip. She becomes the adoptive mother of Silver Bell. 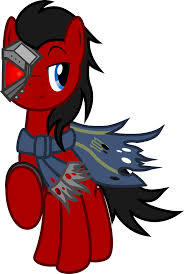 The main antagonist of the story, Red Eye is a cybernetically-enhanced earth pony who is hellbent on making Equestria a better place, albeit through questionable means. He is a charismatic pony, using his words to persuade others to join his cause, and believes while his methods may be wrong, they are necessary.

Leader and creator of the Unity, a Hive Mind of alicorn ponies which she created by assimilating ponies. The Goddess wishes for all ponies to join her collective, believing it would be a mercy to the sufferings of the Wasteland residents. She operates from Maripony. 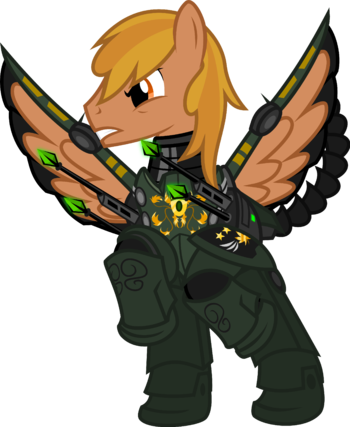 A high-ranking member of the Grand Pegasus Enclave. 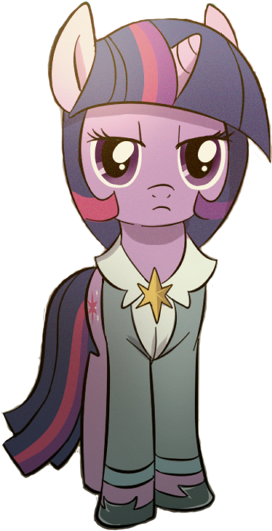 An intelligent unicorn who was student to Princess Celestia and librarian of Ponyville. She served as Ministry Mare of Arcane Sciences. Her most infamous projects are the alicorn experiments. 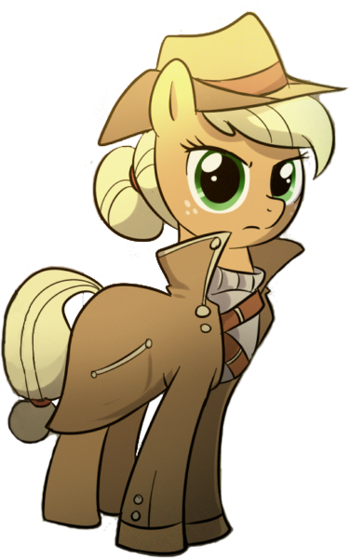 A sensible and down to earth pony, Applejack is the Element of Honesty. She goes from running Sweet Apple Acres to becoming head of the Ministry of Wartime Technology, which deals with the technology, weaponry and everyday products during the war. She was the mastermind behind the Steel Rangers and was in a relationship with Applesnack, who would later become Steelhooves. 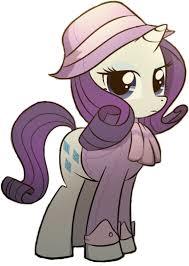 A fashionista unicorn, Rarity is head of the Ministry of Image, which handles Equestria's propaganda against the zebras. Maintain her role as the Element of Generosity, Rarity is forever giving and continues to keep her friends together as the war progresses.

A shy but kind Pegasus, Fluttershy represents the Element of Kindness. She becomes head of the Ministry of Peace, dedicated to keeping the peace in Equestria and trying to end the war by befriending the zebras. Fluttershy invented the megaspells, initially as mass healing spells. Fluttershy's unlimited kindness is her driving force, but it ultimately leads to her undoing. 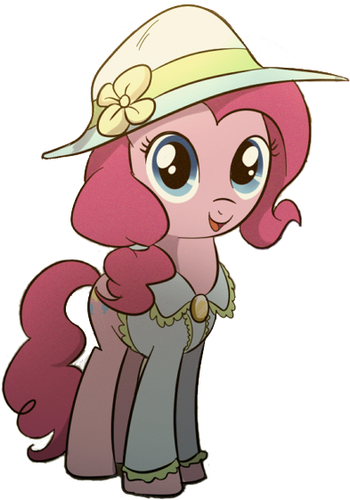 The hyperactive, party-loving Element of Laughter, Pinkie Pie was the head of the Ministry of Morale. She became addicted to the drug Party Time Mint-Als, putting a strain on her friendships as she became more and more unstable.

A speedy, competitive pegasus, Rainbow Dash is the Element of Loyalty. She becomes head of the Ministry of Awesome, a seemingly pointless ministry which is used for storage. It is, in fact, a top secret organization used for black ops and state-of-the-art research and development. Rainbow Dash also commanded the Shadowbolts, who were the equivalent of fighter planes. She battles Gilda numerous times in the war.

The co-ruler of Equestria, Princess Celestia is a benevolent ruler who tries to keep the peace between ponies and zebra but tragedy leads to her abdicating the throne.

Princess Celestia's younger sister, Princess Luna became ruler of Equestria following her sister's abdication. She formed a war government and made the Mane Six the heads of the her ministries. 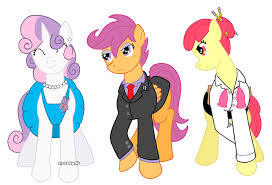 The Cutie Mark Crusaders all grown up. Participating in the war effort, the now adult Crusaders founded Stable-Tec Corporation, creating some of Equestria's most prominent technology like the PipBucks, Terminals and Stables. Velvet Remedy is a direct descendant of Sweetie Belle.

A zebra native to Equestria, Zecora was good friends with the Mane Six prior and during the war. She acted as a mole for Rainbow Dash and Pinkie Pie, pretending to defect to the zebra army to observe them from within. 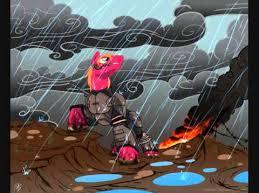 Applejack and Apple Bloom's big brother of little words. He participated in the early years of the war, and ultimately took a bullet for Princess Celestia during an attempted assassination.

A unicorn who was once an Alpha Bitch who tormented the Cutie Mark Crusaders as fillies. In the war, Diamond Tiara worked as secretary and gem inspector at the Shattered Hoof Re-education Facility.

A griffin who was an old friend of Rainbow Dash from their days in flight school. Though her role in the war is not focused on, she is hired by the Enclave as a mercenary to kill the renegade Rainbow Dash. Their final fates are Left Hanging. 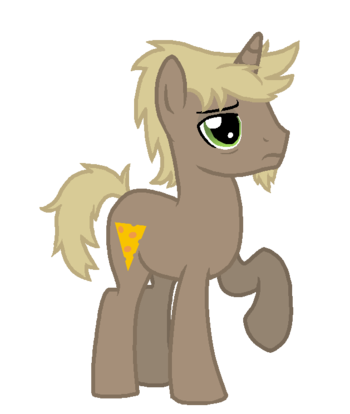 A stallion who Littlepip meets shortly after entering the wasteland. She saves him from a bunch of Slavers, only to be robbed by him. They later run into each other at Tenpony Tower where he is arrested when Littlepip points out his crime, and is executed. His death has a huge impact on Littlepip throughout the rest of the story. 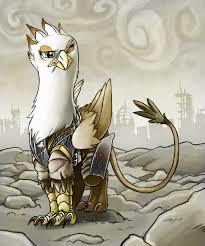 A griffin who is the leader of Gawd's Talons, a mercenary company made up of fellow griffins. She considers herself to be of high moral standards and dislikes being in the debt of others, paying them back as soon as possible. She becomes an ally to Littlepip, despite being associated with Raiders. She is the mother of Reggie and Kage.

Gawd's children who are both mercenaries. Reggie is a Deadpan Snarker and sports Guns Akimbo, whilst Kage is more kinder and uses knives made from Hellhound claws. They become Sixth Rangers in Littlepip's group.

A young griffin who is leader of her own mercenary group called Blackwing's Talons. 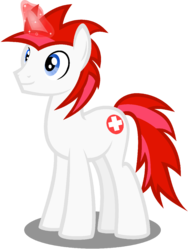 A unicorn living in Tenpony Tower as a medical officer. He is actually a member of the Twilight Society, and has a talent for extracting memories from ponies. 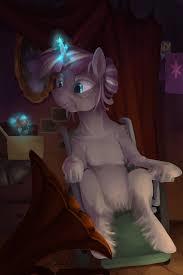 Also known as Twilight Velvet, Star Sparkle is Twilight's mother. She was transformed into a ghoul and fused with a wheelchair by the Pink Cloud. Shunned by other ghouls for her daughter's involvement in the war, Star Sparkle lives alone, with only memories of her daughter as company including a statuette of her. 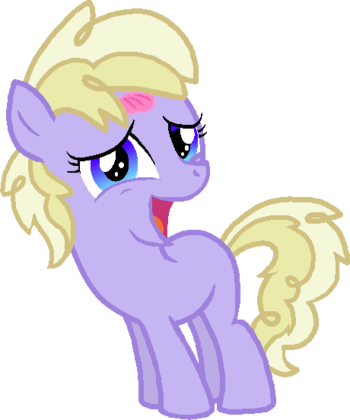 A young filly Littlepip's group meet in the wasteland. She runs the Pinkie Pie Museum and is actually a Stepford Smiler, trying to deal with the traumatic deaths of her family. She is taken in by Ditzy Doo and recovers over time. 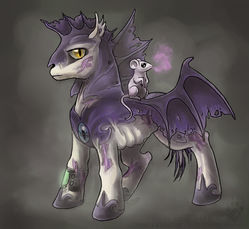 A duo of Guest Star Party Members who are recruited by Homage to help battle the Enclave. Lionheart is a bat-winged ghoul Pegasus pony who once served as Princess Luna's guard. Mouse was once the dragon who guarded the Canterlot treasury, but was transformed into a mouse by an Alicorn. Mouse is also the source of the Pink Cloud.

A pair of Hellhounds, mutated Diamond Dogs, who live in the Everfree Forest. After Littlepip's group save the Albino from the Wonderbolts, he becomes their ally and recruits the elderly Barkin' Saw to aid in the fight against the Enclave.