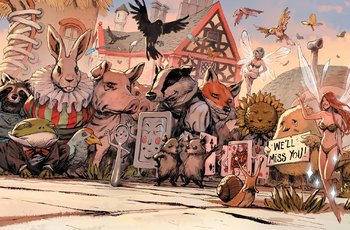 Some of the Farm's very diverse and magical denizens.

A place for Fables whose physical appearances prevent them from passing for human among the Mundanes, this huge property in Upstate New York has been aptly described (visually) as a cross between Old MacDonald and Disney and Munchkinland. But to many of its non-human citizens, it is between a highly regimented community and a glorified prison camp. With these tensions lingering, there have been several disruptions of the peace over the many years, but only one has erupted into a full-on revolution.

Rose Red
The Embodiment of Hope: But what sort of hope will you inspire in those whose lives you touch?
Rose Red: Something to do with second chances, I think. God knows I've needed enough of them.
Snow White's wilder younger sister who has a troubled relationship with her older sibling and is the leader of Fabletown's farm. Is later pegged the Paladin of Hope. 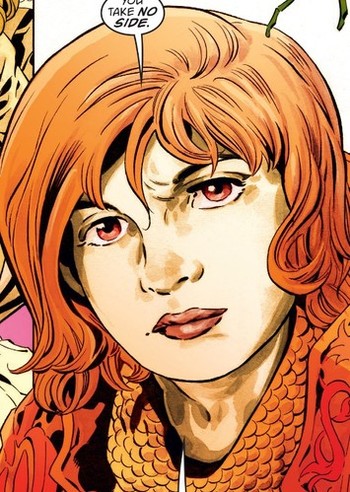 "Yeah, it seems I was a bad girl again."
Boy Blue
"I had no love of playing the hero. Why would I willingly do it again? I've wanted an ordinary life, and I'm finally on my way to a place where I can have one." - Boy Blue 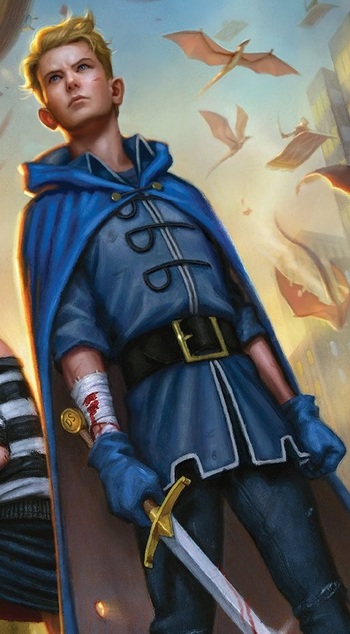 "And always with a healthy dose of, 'a kid like you ain't lived enough and suffered enough to play the blues.'"

A Fabletown citizen, later hired as Snow White's personal assistant. Later proves his skill as a powerful warrior, using a mysterious artifact known as the Witching Cloak, as well as the Vorpal Sword.

Goldilocks
"I am the unsilenced voice of the oppressed masses, and we have power you can't imagine!" - Goldilocks
Although human, Goldilocks lived on the Farm, where she conspired with the Three Little Pigs and numerous other residents to overthrow the Fabletown government. 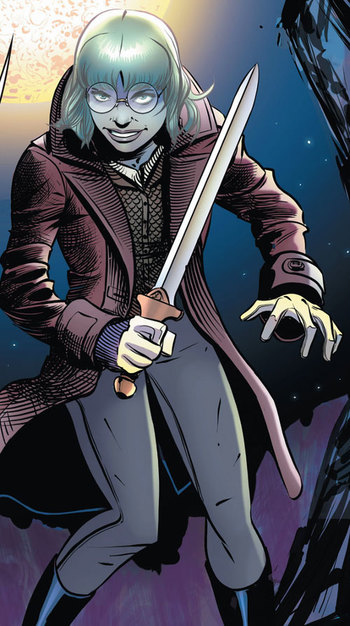 "I'm not only down with the struggle- I'm the tip of the fucking spear."
Reynard The Fox
"Every kingdom has its villains, and this one was no exception. Reynard was a thief, liar, trickster and general contrarian of considerable renown."
The self-professed king of cunning, and sultan of sly. A legendary trickster figure, he was instrumental in helping Snow White survive the uprising on the Farm. Later rewarded by Ozma with the ability to take a human form.

"I'm Reynard the Fox. There're entire nations where the official word for fox is my name. Check that if you want. It's a cold fact." 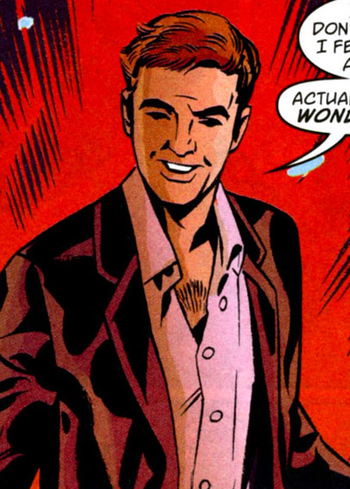 Reynard's human form
Bo Peep Piper
"If I let you walk out that door- and believe me, I can still stop you if I need to- then it will only be because I have your solemn promise that you won't try to talk to [Max] first. You'll use every dirty thing I've ever taught you and just do the dirty business and walk away." Bo Piper 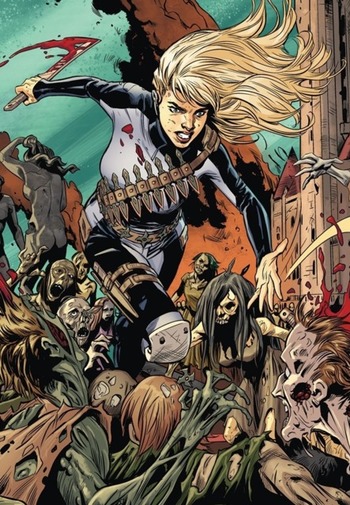 "I think I'm catching on. You want Peter and me to do some dirty business behind enemy lines."
A shepherdess by vocation, she also happens to be a highly skilled fighter and assassin.
Peter Piper
"You'll pay in blood for those magical moments when you're reaching for true greatness in your music, just as I have." - Johannes Piper 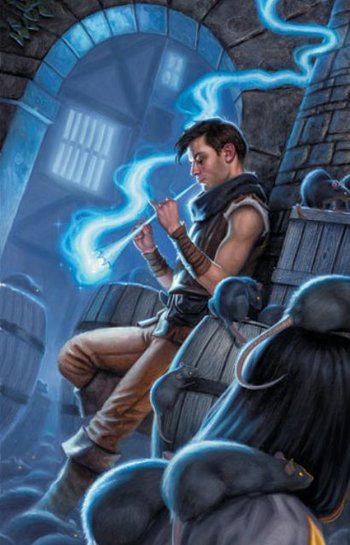 "But Frost doesn't belong to Fabletown. It belongs to me."
A popular musician in Fabletown with deep, dark family issues.
Brock Blueheart ("Stinky") 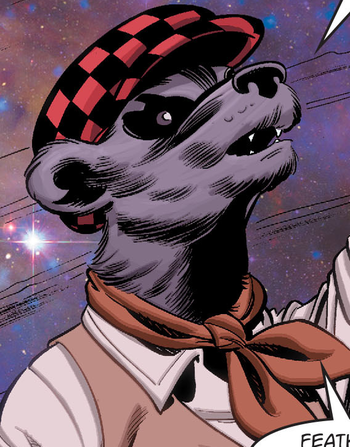 "I am Brock Blueheart! First brother of the Sacred Returnists! Wielder of the blue magic! And I will not be mocked!"
"There are more than a hundred of us now, with more joining daily. Soon we'll be a great power on the Farm. And in time, the greatest power."
A longtime resident of the Farm who rises to new levels of prominence as the leader of a "movement" dedicated to Boy Blue.

The Three Little Pigs
"The time is now! Our destiny waits only for each of us to reach out and claim it!" - Dun Pig 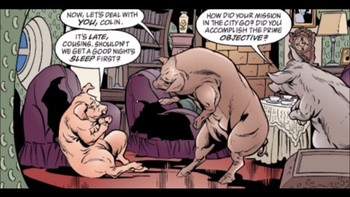 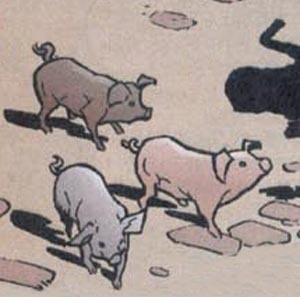 Johnny, Donny and Lonny
Two different groups of porcine residents of the Farm. The originals were cousins Colin, Dun and Posey, and they (except for Colin), are notable for being the ringleaders and probably the main initiators and architects of the Farm insurrection of a few years ago. After their deaths, they were replaced by three new pigs, Johnny, Donny and Lonny, formerly a trio of giants known as The Three Brothers. Posey and Dun later gain new "life" in Flycatcher's Haven.
Clarathea the Dragon ("Clara")
"There's a Mundy song stuck in my head. I especially liked the chorus, as the singer screamed about setting the night on fire. Which resonates with me, for obvious reasons. As dragons by nature are firestarters". - Clara 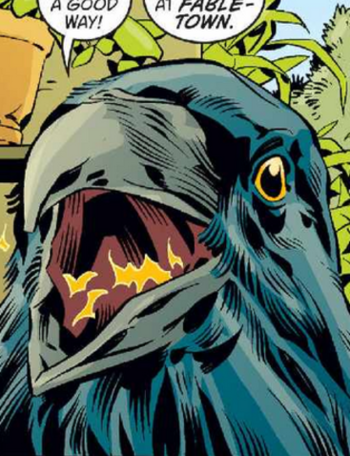 "[Rose]'s my boss. I don't serve Fabletown or the Farm so much as I serve her".
Formerly a fire-breathing dragon, she is now a fire-breathing raven, and serves as Rose's enforcer.
The Three Bears
"As long as Ma and Pa Bear have the ear of the Farm's more predatory element, and I pull the strings of the Bears, I'm the muscle end of our revolution." - Goldilocks 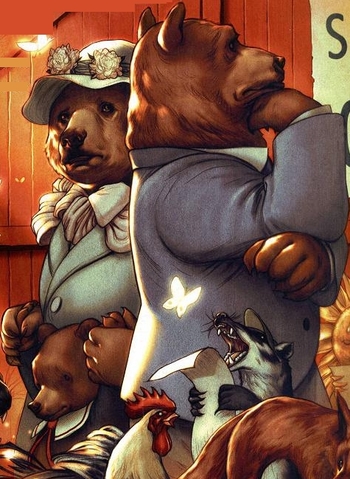 Clockwise from lower left: the new Baby Boo Bear, Mama Bear and Papa Bear
One of the most prominent and influential groups on the Farm, "Pops", "Mums" and the original "Boo Bear" were key in helping get Goldilocks' revolution off the ground. When the uprising failed and they were tried for their part in the revolution, their group sentence of hard labor was commuted after they all served honorably in the Battle of Fabletown, in which the original Baby Boo Bear lost his life.
Bagheera
"I'm Bagheera, the silent stalker of the night. I'm no lowly ox or plow-horse. I refuse to labor in the fields, like some common draft animal." 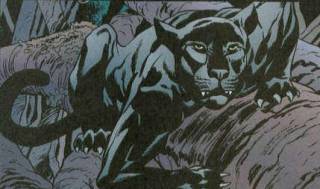 "I'll show that aristocratic asshole, Khan, a thing or two."
The Jungle Book's stealthy panther character, close friend and protector to Mowgli. He was sentenced to captivity after taking part in the Farm revolution, but Mowgli managed to win his freedom through service.
Shere Khan
"You've shown yourself to be nothing to be a paper tiger, while I'm a real one- of the man-eating variety!" - Shere Khan, to Bluebeard 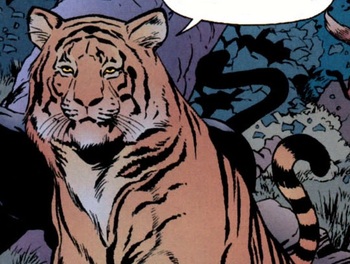 "Does the mighty sultan invite a peasant to share his table?"
The feared predator from The Jungle Book, he continued his tradition of cultivating terror and respect among not only the Kipling Fables but pretty much all Farm dwellers, right up until his death.
Mister Sunflower
"This is all a mere distraction from the real issues! I'm being victimized for taking a stand against the human oppression of Farm folk!" - Mister Sunflower 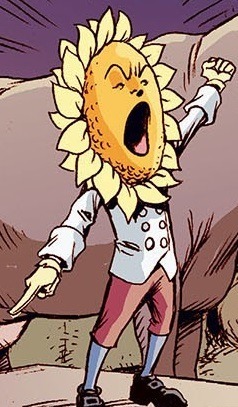 "It's time to make our voices heard! Are you with me?"
An anthropomorphic flower characterized by his perpetually bad temper and rebellious (but basically harmless) tendencies.