General
Founded by the trio Yoichi Hiruma, Ryokan Kurita, and Gen "Musashi" Takekura, the Deimon Devil Bats have traditionally been a weak team due to the shortage of truly dedicated players, a situation that only worsened when Musashi had to drop out of school. With the recruitment of Sena Kobayakawa, however, the Devil Bats' fortunes began to turn around, pulling in more members that formed the Devil Bats into a cohesive whole.
Sena Kobayakawa (小早川 瀬那) 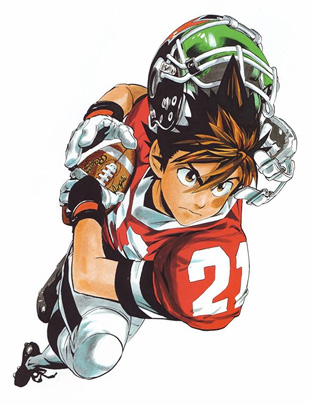 "Little by little... it's as if the lies are becoming true."
Voiced by: Miyu Irino (JP), Yuri Lowenthal (EN), Miguel Ángel Ruiz (MEX)

The titular character of the series, Sena, aka Eyeshield 21, entered highschool always running away from and running errands for bullies, which gave him very remarkable foot speed. Very soon, Sena's talents were noticed by the highschool's Shadow Dictator, also captain of the two-man American Football team "Deimon Devil Bats". And he was promptly... recruited into the team.

At first, Sena played football only because of being forced by a certain insane quarterback. However, after his encounter with Seijuro Shin in the Spring Tournament, he came to the realization that playing football was the first time he actually did something worthwhile with his life, and developed the desire to make himself stronger in order to face Shin again. As more players joined the Devil Bats enabling him to engage in more and more football plays, Sena even started to LIKE playing American football. For the Devil Bats, the recruitment of Sena was the true beginning of the team.

Sena, for his part, grew to seriously love american football, to the point that he voluntarily participated in the Death March and even joined Team Japan for the Youth World Cup. At the end, Sena proved to be impressive enough that he was invited to play football in Notre Dame, truly becoming "Eyeshield 21". The finale showed that Sena went to the Enma University after highschool, and was aiming at becoming a professional football player after college. 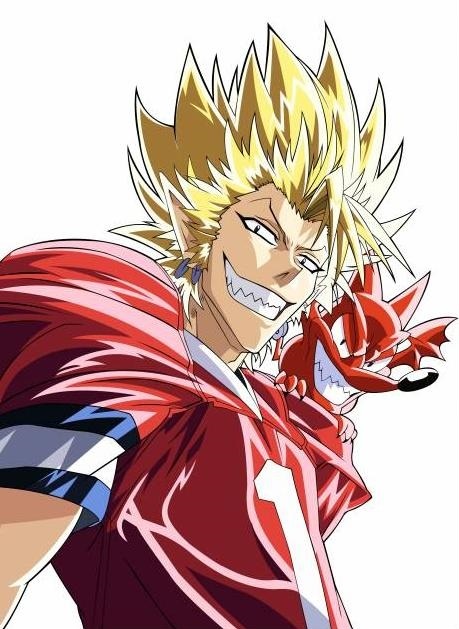 "If they score 99 points on us, we score 100 points on them! In football, offense wins!"
Voiced by: Atsushi Tamura (JP), Derek Stephen Prince (EN), Jesús Barrero (MEX)

Undoubtedly the most memorable character of the whole series, Hiruma is the devilish, gun-toting co-founder and captain of the Devil Bats. He would do anything short of outright cheating to make his team win (and get away with it, too). "Anything" included blackmails, threats (with guns, lots of guns), psychological warfare, trick plays, inhumane training, and that's just to his own team. 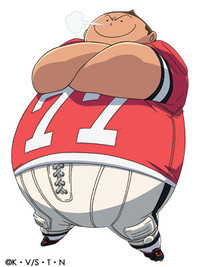 The strongest and slowest player in the Deimon Devil Bats. Kurita lives with his father, the leader of a Buddhist sect. Having a firm belief in the need for modern Buddhist monks to be strong, Kurita's father overfed him and made him the heavy lineman he is today. A soft and gentle fellow, Kurita served as a sharp contrast to Hiruma, often motivating the team with his kind heart and sincere love for them as a team as opposed to Hiruma's more coercive methods.

Mamori is a warm and mature young woman who acts as a motherly/big sister figure to many of her friends. As Sena's childhood friend, Mamori had always been there to protect him. At the start, Sena kept her in the dark about his identity as Eyeshield 21 to stop her from worrying and prevent friction between her and Hiruma. Mamori later decided to join the Devil Bats as a manager to keep an eye on Sena. 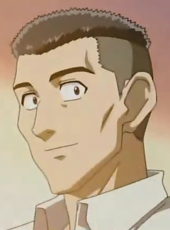 A plain (very plain) fellow who was recruited by Sena from the track team as a helper. Though not an official member of the team, as he's only loaned from the track team, he plays in every match and is more or less accepted as a permanent member. Paradoxically, his lack of remarkable features is the only thing remarkable about him; his lack of presence occasionally lets him slip through the opposing line and gain some yardage, but that's about all you can say about Ishimaru. Wait, who were we talking about again? 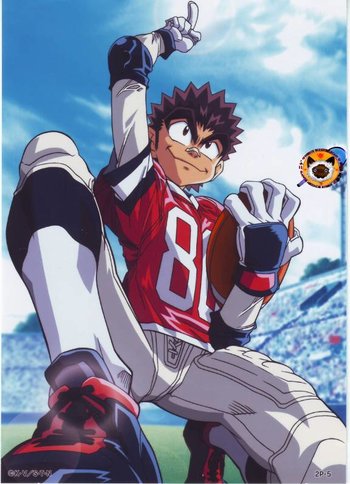 A hot-headed first-year student with an uncanny resemblance to a monkey. Monta had always wanted to be a great baseball star like his hero, Masaru Honjo of the baseball team Shuhei Bears. However, Monta's skills weren't well-rounded enough for baseball, despite his extreme prowess in catching. His dream to become a baseball player was shattered when the coach of Deimon Highschool's baseball team assigned him to the team's third string. At the same time, the Devil Bats were looking for a wide receiver and, with some... help from Hiruma, got Monta into american football. Monta eventually came to equal footing with Masaru Honjo, by defeating the latter's son, Taka Honjo, in the Christmas Bowl.

Kazuki Juumonji (the one with the scar), Kouji Kuroki (the one with dark hair and fishlips), and Shozo Togano (the one with sunglasses who's always reading manga) were originally just three delinquents who targeted Sena on his first day at Deimon. However, Sena managed to escape them, and Hiruma managed to get some embarrassing pictures, using them to blackmail the trio into leaving Sena alone. While scouring the Devil Bats' clubhouse for the negatives of those photos, they got dragged into an exhibition game with the Zokugaku Chameleons, and from then on were blackmailed into acting as linemen. However, they gradually built up a camaraderie with the rest of the team and start taking the sport more seriously as time goes on. 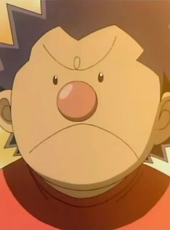 A diminutive but powerful first-year student who looks up to Kurita. Communicates almost exclusively in "Power-Speak", a language of grunts and one-word sentences that can only be understood by strong men such as Kurita (and Mamori, for some reason). 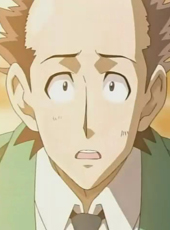 A second-year student who had grown tired of being pressured by his mother, and everyone around him, into spending all his free time studying. He joined the Devil Bats in search of something more, and managed to stick with the team through all the hellish training. While he wasn't good enough to be more than a benchwarmer, he eventually got to prove himself during the Fall Tournament. 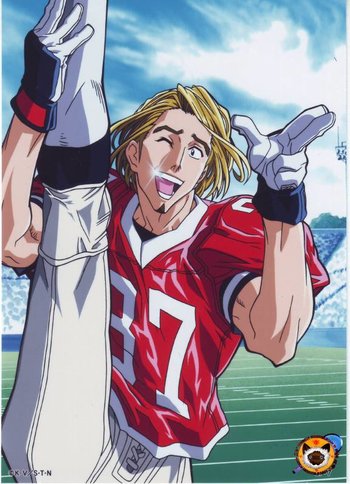 A good-looking, flamboyant idiot with a highly exaggerated sense of his own skills. After flunking out of a football team tryout in America during the Death March arc, he decides to go back to Japan with the Devil Bats and play for them. 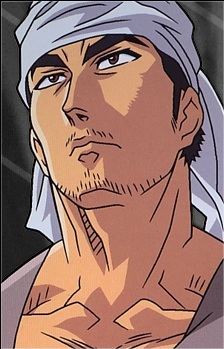 "When a man bleeds freely for the sake of other people, it's only proper to pretend that you never saw it."
Voiced by: Rikiya Koyama (JP), Igor Cruz (MEX)

The third founder of the Devil Bats and the team's original kicker. Musashi was a mature, level-headed guy who's a constant source of sagely advice to the first-years. He first appeared as a carpenter who helped with expanding the Devil Bats' clubhouse, and for a while, none of the first-years was aware of his real identity. Upon the revelation that he was the last member of the founding trio and the kicker whom the team desperately needed, Musashi dismissively said that he left Hiruma and Kurita due to the boredom of staying in a weak team. However, it turned out that he was actually forced to leave school to help with his family business after his father fell ill, and still harbored a burning desire to return to the team. Aware of this, his father's employees all gathered together to tell Musashi to go back to the field to help his friends. And Musashi eventually returned to the Devil Bats midway through their match against the Wild Gunmen. 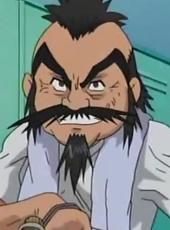 An old man with a weakness for drink who taught Kurita, Hiruma, and Musashi a few things about football. Back in college, he played football alongside Gunpei Shoji, coach of the Ojo White Knights. 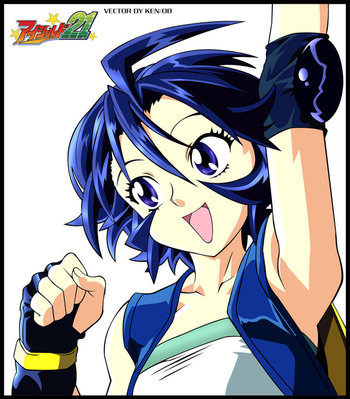 A perky yet levelheaded young woman, Suzuna was constantly looking out for her idiotic older brother, Natsuhiko. She bumped into Sena when the latter was undergoing the Death March, and swiftly became friend with him. Once her brother decided that he would like to join the Devil Bats, Suzuna came along and supported the gang until they finished their Training from Hell. When they were back to Japan, Suzuna joined the team as the head cheerleader while recruiting a sizable group of girls to back her up, providing emotional support for the Devil Bats on the field. She, together with Sena and Monta, later went to the Enma University.

A fierce mongrel dog who sleeps outside the Devil Bats' locker room. Not quite Hiruma's pet, but the two use each other for mutual benifit.

Two guys from the basketball team who were blackmailed into acting as support players. Not much to say about them, but Satake once stole underwear from the girls' swim team locker room (which turned out to belong to the cleaning lady), and Yamaoka is a fanboy of Ai Kago from Morning Musume.

A sumo club member who is so lazy, he can't even be bothered to open his eyes. When Sena and Natsuhiko took the wrong bus to the game with the Amino Cyborgs, he was dragged in as a stand-in, and has since stayed on as a support player.