Not all spoilers are currently marked! And due to their importance to the story, all spoilers under "Route Specific Characters" are unmarked period! You have been warned.

In General
Eric (The Protagonist / Main Character / MC)
The Player Character. A student at CrestHaven University as well a member of its tennis team. Unknown to most of his friends and teammates however all is not well: due to familial and financial hardships he is currently living in a homeless shelter. Despite his troubles, he remains optimistic and friendly to just about everyone.
Harold "Coach" Grifter 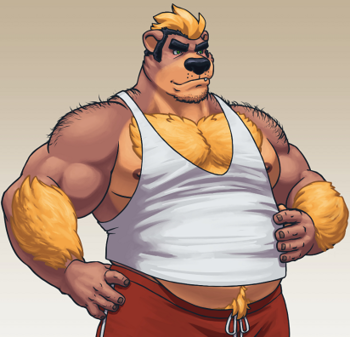 Coach of the CrestHaven University tennis team as well as one of its professors. While usually friendly, he takes his duties very seriously and can sometimes come across as gruff. Nevertheless, Coach Grifter will happily help any of his students.
Chester Hayes 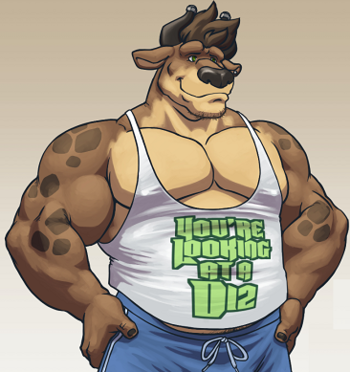 Chester's just another member of the tennis team and a fellow classmate at CrestHaven University. He can be hot-tempered at times, but you can count on him to help keep you motivated to improve yourself. As much as he likes to work out and try to make himself more muscled than he already if, but he enjoys his food a bit too much to get rid of that gut.
Spencer Caldon 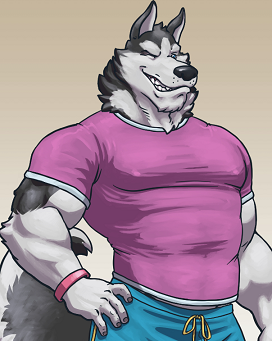 Here we have Spencer Caldon, ranked number one on CrestHaven University's tennis team at the end of last season. This husky has been Eric's friend for a while now, and he's known for being good at pretty much everything he does. But who knows, maybe this guy has something hidden about him that even his closest friends don't know? 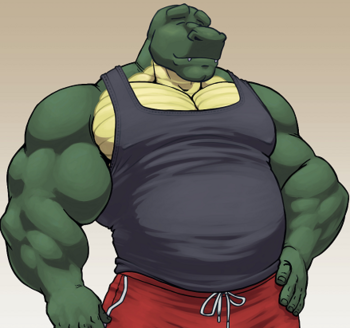 Introducing the tallest member of the University's tennis team, we have Dozer. He tends to stay quiet and keep to himself for the most part, so it's hard to judge what kind of person he really is. Nobody on the team knows much about him other than he has the precision to match the power behind his shots, but that doesn't mean you can't try to figure him out.
Darius Maynor 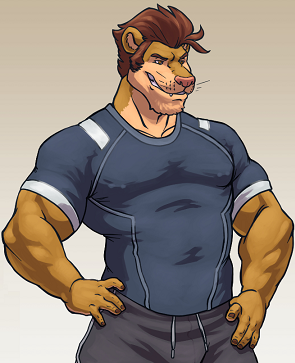 The final member of the University's tennis team and its resident pervert. He is extremely sociable but with the unfortunate tendency to hit on just about anyone with a Y-chromosome. At first, it seems like there isn't much this lion takes seriously but when he does choose to apply himself he demonstrates some remarkable skill. Maybe there's more to this flirtatious feline. 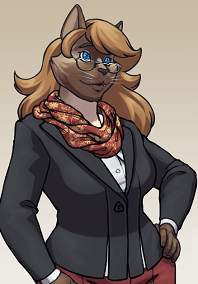 The owner of the CrestHaven Homeless Shelter in which the protagonist is currently living. Her upbeat attitude and kind nature make it easier for her to get along with people and she likes nothing more than helping others in need.
Richard 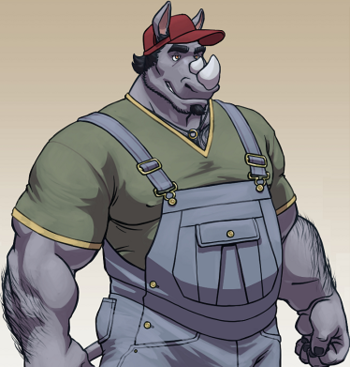 Another resident of Maria's shelter who works as her assistant/handyman. Although not much is known about this rhino currently he is fiercely committed to helping out where he can... even if he'll complain loudly while doing it.

Harold's highschool sweetheart and ex-wife. After leaving Harold when she learned he was bisexual, she returns just as Eric's and Harold's relationship starts rolling, with her appearance itself causing Harold a massive amount of stress. Why is she back, and what does she want?
Chester's Route

Chester's older brother and roommate. He acts like a Guardian Angel for Chester, especially after the "incident", where he now becomes aggressive towards anyone his brother shows interest towards. It shouldn't be hard to gain his trust, right?

Captain of the CrestHaven University football team. Once good friends with Chester, he - as well as the rest of the football team - ostracized Chester when they learned he was gay. Now, he tends to bully Chester and make his life a living hell. What is his problem? And will there ever a stop to it?

Owner of the Critical Hit Arcade. A simple businessman who doesn't fully understand how modern technology works, he dreams of owning a place that people will come to get away from the world.
Spencer's Route

A coworker of Spencer's at Dynamite Springs. He both works as a bartender and a striper.

The new professor of Astronomy at CrestHaven University and average goer to Dynamite Springs.

Owner of the cafe that Eric works at in this route.
Dozer's Route

Dozer's childhood friend and ex-lover. Being somewhat of a loner and bullied at a young age, he naturally drifted towards Dozer, who was also a loner at the time. Eventually, the two fell in love with each other but decided to break up when their careers came to reality. But will he be so accepting of someone who's now dating his former flame?
Darius's Route 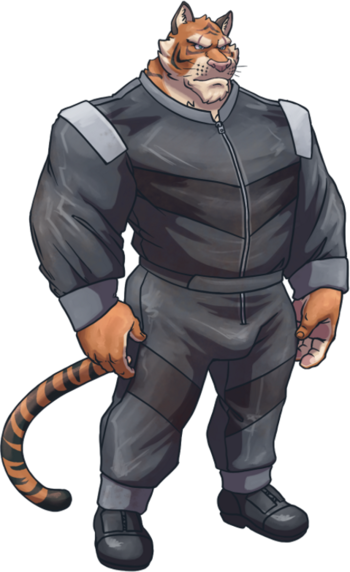 One of Darius's friends as well as his mechanic.