In the first game, RYUSEITAI is a superhero unit who won't let any evils go unpunished! The curious members apparently have come together under the banner of justice...?!

In the second game, RYUSEITAI is a squadron that fights for justice, affiliated with Star Maker Production. Led by Chiaki Morisawa, their fanservice is laden with the quirkiness of their varied personalities. When doing work in media, they participate in anything that best utilizes the character of their unit. Thus, they focus on work involving sports variety programs, gourmet reports, and acting as main characters of children's programs. They continue to do volunteer work and hold hero shows regularly, and have continued to do so since their time as units.

Their theme colors are the five colors of each member's role, which are based off of super sentai roles. 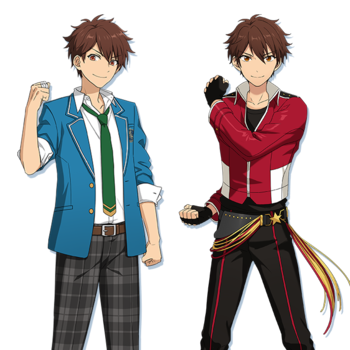 EnStars!: The Scorching Hot Warrior, Bearing Justice!
EnStars!!: The Passionate Hero, Protecting Smiles!
"I'm Chiaki Morisawa with the burning heart! Count on me whenever you're in trouble!"

High-spirited enough to make certain low-spirited underclassmen's days waaay too exciting, Chiaki makes up the 50% in the 150% of RYUSEITAI's enthusiasm. He's a good-natured upperclassman who loves being relied on and is eager to undertake just about anything. All in all, as Ryusei Red, he wears the traditional Sentai implications of the color pretty well.

While it may come as a shock, he admires superheroes a lot, and much like them, thinks teamwork is the best thing since sliced and diced crispy fries, as well as introductory lines, which every member has due to him. Despite his good reflexes, he often gets injured and has to be taken care of by the school doctor, Jin Sagami. 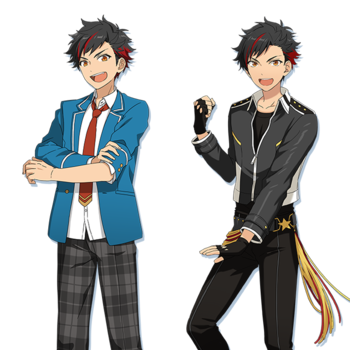 EnStars!: The Relentless Black Flame Is Burning Up!
EnStars!!: A Fistful of the Iron Heart!
"My hobby is weight training! My dream is to become a man among men!"

Serious but energetic, Tetora's the sort of (guy's) guy who can only focus on one thing at a time. He's a hard worker, but his enthusiasm usually doesn't pay off the way he hopes it will—or really, most of the time around the third year karate club captain Kuro Kiryu, who he admires very much, and affectionately refers to as "boss." Nonetheless, he always puts his all into being Ryusei Black of RYUUSETAI.

He claims to be a good cook, but actually has no sense of taste, and tying into his single-mindedness, he can't do detailed tasks because he's not very good with his hands. He is good friends with his classmates Tomoya Mashiro and Hajime Shino, with the latter often helping him with his studies.

Mild-mannered and mysterious, Kanata is Ryusei Blue, and one of the "Three Oddballs." The teachers often keep a close eye on him since his eccentric behavior stands out a lot—for example, all those times he installed a giant fish tank and other enigmatic apparatuses in the academy, with the Marine Bio Club as his excuse.

He's usually calm and takes it easy, but gets excessively excited when it comes to marine life. He seems obsessed with eating his food with soy sauce. He loves soaking in water and watching the ocean despite the fact that he cannot swim. Occasionally, he accompanies fellow RYUSEITAI member, Midori Takamine, to watch the sea.

Shinobu has chuunibyou and admires ninjas, establishing a ninja association all by himself and spending his days training alone. Although he's ambitious and loud-mouthed especially to himself, he's often shy around others, and being a bit naive, can fall for tricks.

Since he tends to cause small fires during his training, the teachers are keeping an eye on him. He loves high places and attics. While athletic, Shinobu doesn't quite make the best use of his own potential, but still seems to have a good time as a part of the Broadcast Committee, and as Ryusei Yellow of RYUUSETAI. 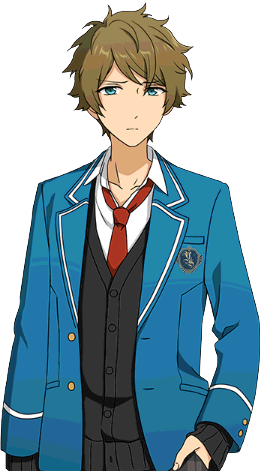 The tallest among the first years, Midori is blessed with good looks and physique, but has no confidence, falls into a funk really easily, and is a bit timid. He often makes inappropriate remarks and rants, and formal and honorific speech are practically his enemy. Perhaps unsurprisingly, he's bad with horror and thrill rides. He's the son of the greengrocer in the shopping district beside the academy, and thought it'd be easiest to attend high school there, but...

Somehow, although he'd never meant to become an idol, he entered the "idol course" by mistake, and has now been saddled with the weight and moniker of Ryusei Green of RYUUSEITAI. The unit's excitability has time and again proved too much for him, Chiaki Morisawa in particular, but at least when he's depressed, he can go see the ocean with his fellow group-mate, Kanata Shinkai. 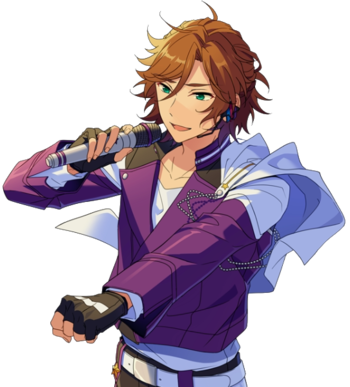 Former Ryuseitai captain in the previous year and the vice captain as a second year. The unit was filled with slackers and hoodlums then, would only behave when Madara was around.

Though Madara is known by some students as former Ryusei Purple, Madara's actual Ryusei color changed frequently due to people constantly joining and leaving RYUSEITAI in the previous year. As the captain of the first squad of Ryuseitai, his original uniform color is unknown.