One of three possible results of a plague mutation, "anthros" are literally animal people, having gained semi-accurate (as in, somewhat cartoonish, for an unknown reason) animal features during the transformation from their human form. Said transformations are highly variable (one person may become a tall sexy cat woman, while another man mutates into a tiny moggy) and Word of God states that they are affected by cultural stereotypes, so there is definitely something unusual at work... 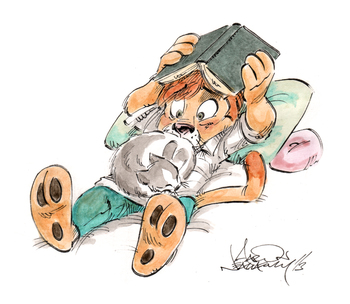 A feline ex-Apex contractor who mutated under sedation after being captured just before WWIII. A wanderer, he hates being confined by a society he has trouble believing in and finds solace in the emptiness of the Great Waste. The loving fiancee and constant companion of Holly Hollister.

He replaces Albert Anderson as the main male protagonist (January 17, 2011). 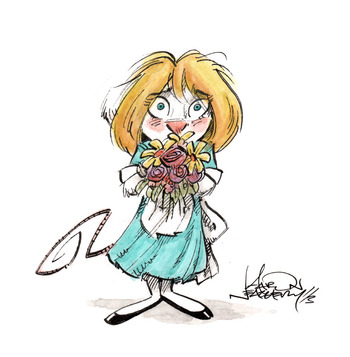 A waitress in Endtown, Holly Hollister mutated into a three-foot-tall mouse pre-WWIII and finally adapted to her new body "after having discovered the joys of Camembert".

Entering Endtown traumatised from pre-war events, she spent two years of her life living alone up in the Endtown clocktower before deciding that she could no longer isolate herself from the rest of humanity and mustering the will to join the people below.

Her philosophy of self-acceptance coupled with her determined and caring attitude help Wally Wallechinsky reconcile his own identity issues and results in he and Holly becoming a pair. Possibly the fastest person in Endtown, she prides herself on never having been caught unless she wants to be.

She replaces Gustine Greene as the main female protagonist (April 11, 2011).

reporter for the Endtown Examiner and close friend to Mayor Walter Trimble.
Chic 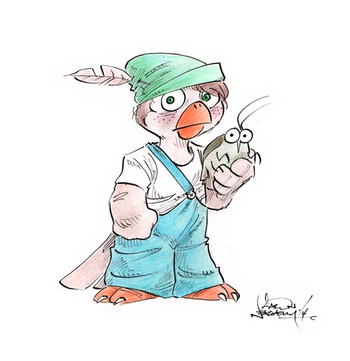 A young bird anthro who survived the selection process in Unity because his silhouette appeared reptilian during his egg-candling. Rescued from the destruction of Unity by Wally's group (particularly Holly, who saved him from dying at the hands of a possessed Jim), he ended up travelling the Great Waste with them.
Kirbee Durfee 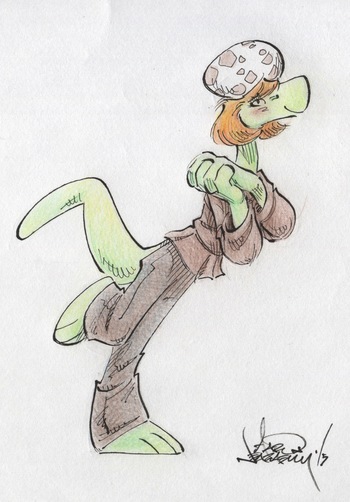 A somewhat gullible and airheaded, bubbly, upbeat lizard lady from the colony of Unity, Kirbee has taken to travelling with Wally, Holly and Chic.

Possibly the closest thing yet to a picture of Eye...
An unseen, supernatural entity of uncertain origin and intent. Aaron Marx's nemesis, according to Word of God. So far it has only appeared once, possessing the raccoon Jim and using him as an agent of destruction inside the lizard-only colony of Unity.

Fan sleuthing using Aaron's older, canon-connected works coupled with comments and visuals from the Marx-like being in Wally's dream strongly suggests that it is a being created via multiple souls conglomerating around an invisible eye-beast pet of Marx's during a reality collapse. Since the reality collapse was caused by Marx, he may be considered entirely responsible for Eye's existence if this is true. There are further disturbing implications that it steals souls and incorporates them into itself... 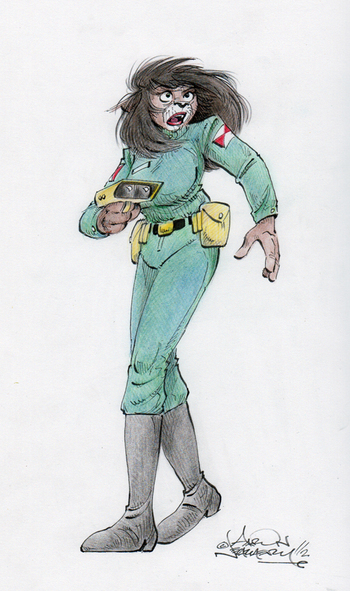 A mutant feline and the (former) chief of Endtown's security. She ruthlessly orders others and isn't hesitant to kill anyone in her way. She's also haunted by her former life as a human being. She's nicknamed "Blackie".
Petey

A brain that had been "wiped" and wired into a Topsider transport vehicle before being placed into a robot body. Like most creatures that meet this fate, he has no memory of his past life, but he's more than willing to help the people of Endtown (within reason).
Linda Kowalski

A koala lady and ex-Topsider, saved from being killed by Flask by Wally and mutated into an anthro instead. Later forgiven by Holly for trying to kill her, with the mouse lady aiding in her integration into Endtown society.

An un-mutated human with a plethora of power. He has a very murky backstory that hints he's from another universe. He's usually cheery like a cartoon character and has almost nothing affect his mood.
Advertisement:
Jim Jenson

An ex-Topsider who decided to become an anthro alongside his significant other, Sarah, in order to cure her of her cancer and then stay with her in solidarity afterwards. Transformed into a raccoon.
Sarah Battle 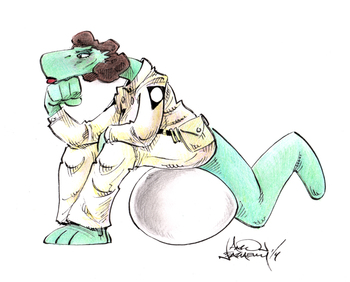 An ex-Topsider who decided to become an anthro in order to use the "body reset" factor to cure herself of her cancer. Her fiancee, Jim, transformed himself alongside her so that they would be together in all ways. Upon waking, she had become a lizard.
Albert Anderson
A human male that retained his form after being exposed to the Mutagen and the first protagonist of Endtown. Al's resourcefulness and quick thinking makes him a candidate for Topside missions.
Gustine Greene
A large anthropomorphic rhino and Albert's girlfriend. Still unable to adjust to her new life and form, she wishes to be human.
Sparkplug Sanders
An engineer found inside a city that had been curved in half. He only appears in the first story arc, and has been never mentioned since, despite having played an important part of the world's lore.
Jacob Jackrabbit
An ultra-conservative reporter for the Endtown newspaper, is also the leader of an anti-human association. His fear and loathing of humans (mutated or not) mirrors that of the Topsiders towards anthros. Jake holds "self-acceptance seminars" which are really recruiting sessions for his lynch mob. In Jake's association, changing one's last name to that of one's anthro type shows that you've come to terms with being an anthro.
Velda Van der Veezil
Octavius Allgood's liaison between security and Endtown's citizens, Velda is a tricky, manipulative woman with secrets of her own.