Character page for characters that reside or have resided in Avalor, Vallestrella, or the Spirit World. 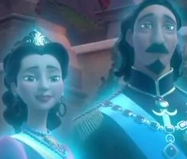 Appearances: Sofia the First | Elena of Avalor
"The only real failure is giving up."
— King Raul

Elena and Isabel's parents, Francisco and Luisa's daughter and son-in-law, and Esteban's aunt and uncle. Forty-two years before the events of Elena and the Secret of Avalor, Lucia gave Elena the Amulet of Avalor for her fifteenth birthday, telling her it would protect her from harm. A year later, Lucia and Raul were murdered by Shuriki the day she invaded Avalor. But after 41 years of being trapped inside the Amulet, Elena avenged their deaths by breaking Shuriki's wand and ending her tyranny over Avalor. 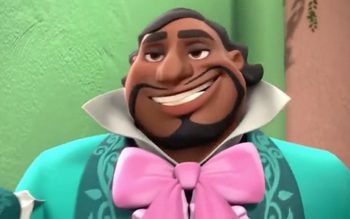 Elena's paternal cousin who resides on the island of Nueva Vista.

Esteban's parents. His mother was Queen Lucia's sister and a daughter of Francisco and Luisa.

The taciturn Captain of the Royal Guards at the beginning of the series.

An arrogant guard. He played on the castle olaball team and competed to become the next guard captain, though he ultimately lost both positions to Gabe.

Another royal guard. He competed for the captainship of the royal guards along with Rico and Gabe, but was eliminated in the first round.

Though Higgins is technically a member of the Royal Guard, he's usually seen acting as Esteban's assistant and aide-de-camp. He's affable but not terribly competent, and his mistakes have caused various problems for the royal family.

Voiced by: Melissa Fumero
"Have I ever dreamed of joining the Royal Guard? Once or twice... a day..." 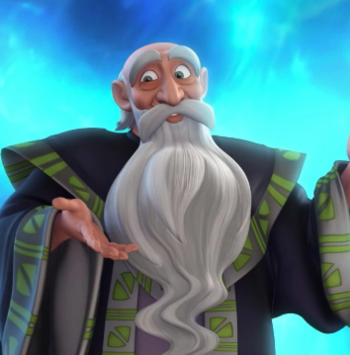 The royal wizard, and also Mateo's maternal grandfather and the father of Rafa. 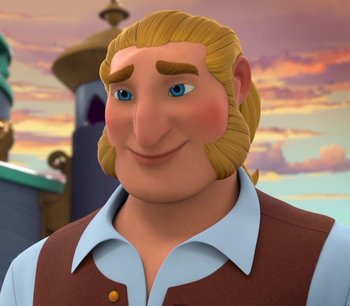 The harbor master of Avalor's harbor. He is also Naomi's father. 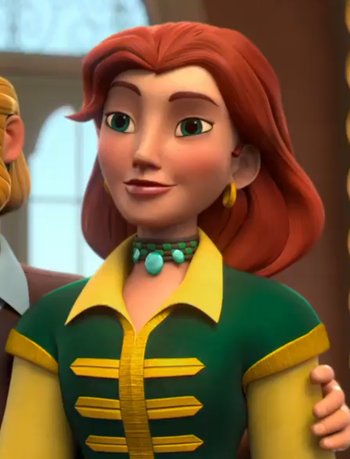 A sea captain and Naomi's mother.

A baker and Gabe's father.

The teacher of Isabel's class.

A disabled friend and classmate of Isabel's.

One of Isabel's classmates. He is boisterous and impatient, and doesn't really like school.

Another classmate of Isabel's. 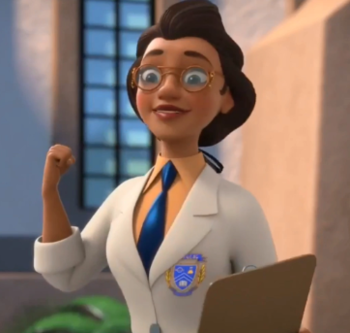 A professor from the Avalor Science Academy. 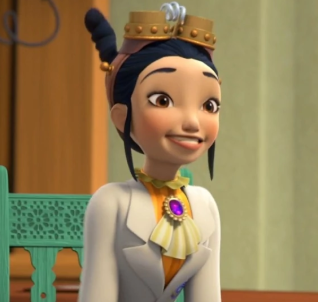 A girl in Isabel's college class.

A young, arrogant student who finds his position in the Science Academy threatened when the even younger Isabel joins his class.

The King of the Noblins, a species of shapeshifting dwarves that can turn things to gold.

A rock monster who can force a volcano to erupt when he becomes angry.

The captain of a bewitched ship. After rescuing the daughter of a powerful sorcerer, he was granted a wish and chose to live forever along with his crew. Their wish was granted and they were permitted to spend the rest of eternity sailing the oceans and partying without end—at the price that they could never leave the ship. When they encounter Elena and her friends, Chiloya decides to draft them into his crew, whether they like it or not. 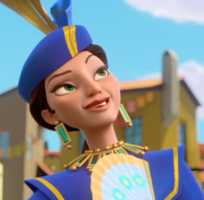 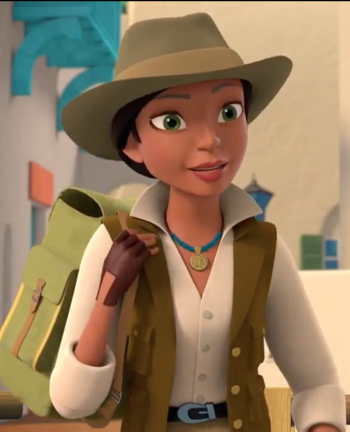 An archeologist and historian.

Owners of a restaurant and the grandchildren of the late Doña Angelica. 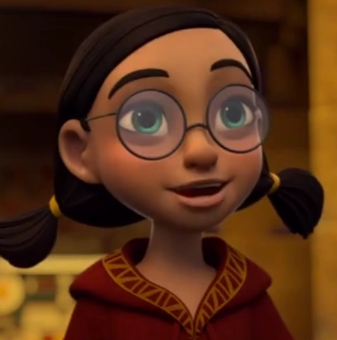 A famous explorer who vanished years before the show began.

Cristina's father. He and Cristina live in a village outside of Avalor City.

A member of the Villalobos family and a teammate of Antonia during royal guardsmen tryouts.

A member of the Villalobos family and a teammate of Antonia during royal guardsmen tryouts.

A mighty species of talking (and singing!) jaguars with wings of the macaw. Although they hail from the realm of the Jaquins, Vallestrella, they are a symbol of Avalor's pride and serve as the guardians of the kingdom.

They are based off of the Mexican alebrijes. 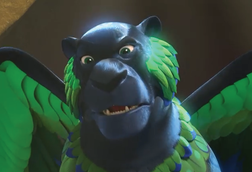 The current king of the Jaquins, having ruled for fifty years. He is also the father of Skylar and Nico.

The leader of the jaquin guardians based in Avalor.

Three new jaquin cadets being trained by Skylar. Nico is Skylar's brother and is a fun-loving prankster, while Ciela is gung-ho and Avion is unsure of himself. 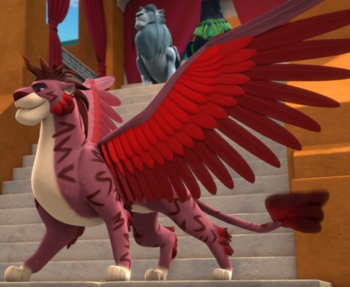 An arrogant and athletic jaquin who was initially Chief Zephyr's chosen successor. He is the twin brother of Vestia. 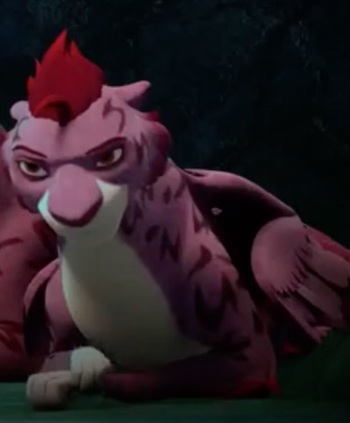 An elite member of the King's Guard.

A jaquin guard and Skylar's cousin. 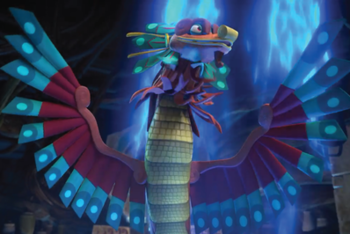 The last of the sun bird oracles, a group that had sealed away Marimonda in the past. His whereabouts became unknown, though he was rumored to be hiding in the mountains.

A trio of sunbirds that help Elena master the Scepter of Light.

Voiced by: Mick Wingert
"ARGHHH! YOU'RE BLOCKING MY SUN!"

A recurring butterfrog who just wants to sunbathe in peace.

A species of creatures that never stops eating. Three of them—Stilts, Big Mouth, and Roly—escape from their glen and begin wrecking havoc on Vallestrella. 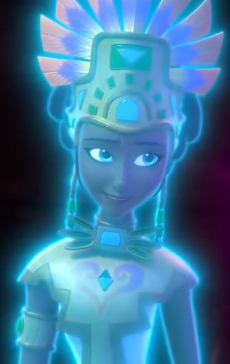 The ghost of the last royal wizard of Maru.

A skilled but arrogant general. He died long ago, but his ghost possessed his sword and can also possess anyone who wields it.

The grandmother of Julio and Carmen. She returns as a ghost during the Day of the Dead, and she seeks Elena's help to stop her grandchildren from selling the family restaurant.

The ghosts of two vigilantes who, when they were alive, worked with Francisco as the trio known as the Los Tres to fight crime and protect Avalor.

A musician. Having spent his entire life to himself, he decides to ruin Dia de Los Muertos with the help of Sanza after having had enough of never being mourned in the living world. 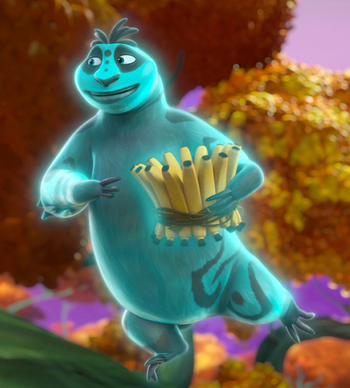 Mateo's hapless spirit animal. He has the form of a sloth.

An incompetent wannabe spirit animal. He has the form of a monkey.