Given the First-Episode Twist required to discuss future volumes, expect Volume 1 spoilers. Also, the organization of characters alone can be spoiler in some cases, so do be careful with that while reading.

Bloody Reina
Voiced by: Ikumi Hasegawa (Japanese), Suzie Yeung (English), Fernanda Ornelas (Latin American Spanish)
Lena is a military officer of the Republic of San Magnolia assigned to command the notorious Spearhead Squadron. Various events eventually lead to her saving them from a Suicide Mission ordered by the San Magnolian government as a way to terminate all Eighty-sixers who somehow survived long enough to complete their terms. She ends up commanding the Eighty-sixers after the Gran Mur fell and, after the Federal Republic of Giad rescued them, becomes the Tactical Commander of the Eighty-Sixth Strike Package.
Shinei "Shin" Nouzen

Undertaker
Voiced by: Shoya Chiba (Japanese), Billy Kametz (English), Alberto Bernal (Latin American Spanish)
The Captain of Spearhead Squadron, Shin has a telepathic ability to detect Legion drones after he was nearly killed by his own brother. After surviving their Suicide Mission, he and the rest of his Squadron reached the Federal Republic of Giad where they were given refuge. After the group eventually chooses to return to the battlefield, Shin ends up as Captain of Nordlicht Squadron, and later the reformed Spearhead Squadron within the Eighty-Sixth Strike Package. He specializes in close range combat and tends to damage his Feldreß during battle.
Advertisement:

A squadron of Eighty-Sixes that's been known to have its Handlers resign and even commit suicide. After the fall of San Magnolia, the surviving members ally with the Federal Republic of Giad.

Voiced by: Misaki Kuno (Japanese), Kimberley Anne Campbell (English), Natalia Crespo (Latin American Spanish)
The last Empress of Empire of Giad who's adopted by Ernst Zimmermann for her safety. She initially joined Nordlicht Squadron as a mascot after Shin and the group choose to return to the battlefield. After, she becomes Lena's aide, using her ability as a seer to help monitor troops.
Henrietta "Annette" Penrose

Voiced by: Kana Ueda (Japanese)
The overall commander of the Strike Package, Grethe is also the head developer of the Reginleif and a skilled aircraft pilot prior to the fleet grounding.
Erwin Marcel

Voiced by: Kengo Takanashi (Japanese), Kiba Walker (English)
Eugene's friend, he was forced to retire from a combat role after the large-scale Legion offensive caused a permanent leg injury to him. He has since become a tactical aide. 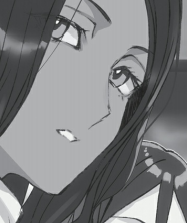 Shiden's vice-captain of the Queen's Knights and Brisingamen squadron. 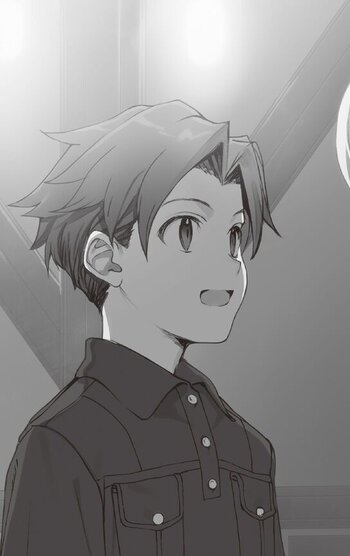 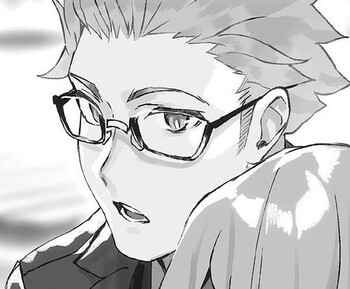 Sagittarius
Initially an unnamed student who gave a speech condemning the treatment of Eighty-six back in Volume 1, Dustin is the only San Magnolian Alban volunteer of the Strike Package after Giad came to rescue.
Brent Bernholdt 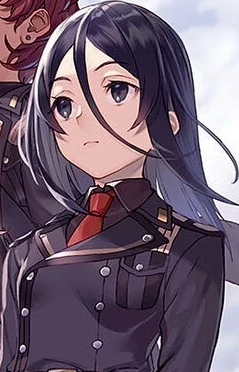 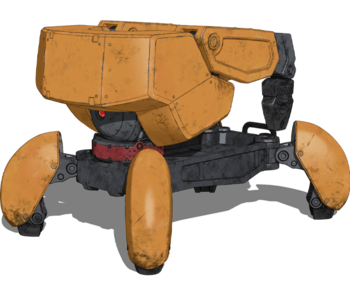 An AI developed by Shin's father, Fido was Shin's loyal pet robot dog until Shin was taken away. He uploaded himself online and then into a Scavenger unit, supporting many 86 until he was left to wander the battlefield alone to try and find his owner, which he eventually did. He is the protagonist of a side-story

which details his past from his perspective.
TP 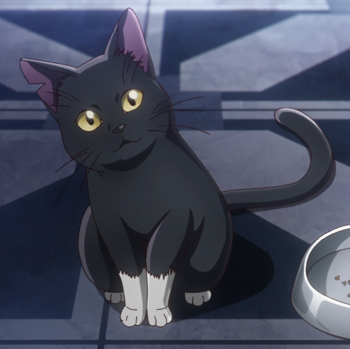 Originally an unnamed black cat adopted by the Spearhead Squadron, after they were sent to their final mission the cat was adopted by Lena who named him Thermopylae.

Voiced by: Kazuyuki Okitsu (Japanese)
Willem Ehrenfried is the Chief of Staff responsible for the Federal Republic of Giad's Western Front, as well as an old friend of Grethe Wenzel.
Richard Altner

A Giadian who befriends Shin during one of the latter's library trips. He became Shin's partner early in Shin's career in the Federacy army and kickstarted a lot of Shin's Character Development, despite only spending a rather short amount of time together before Shin was forced to euthanize him due to Eugene's injury in the field.

Given that Spearhead Squadron ultimately survived their Suicide Mission and is now serving under Giadian military, this section will cover those that died while fighting in the Eighty-Sixth Sector.
Daiya Irma

An Alban Juggernaut mechanic working with Spearhead Squadron in Volume 1. He eventually dies holding off the Legion alongside other mechanics in order to allow Rito's unit to escape when Gran Mur falls. 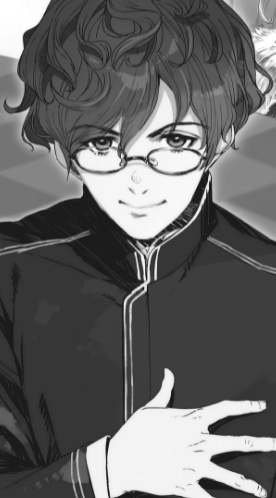 Gadyuka
Vika is the fifth prince of Roa Gracia, commander of the nation's southern front, and the developer of both Sirins and the Marianne Model AI that would eventually be used in the creation of the Legion.
Zafar Idinarohk
Voiced by: Masaaki Mizunaka (Japanese)
First prince of Roa Gracia and Viktor's eldest brother.

Vika's personal assistant. She was brain-uploaded form of Vika's milk sister Lerchenlied, and the only Sirin to not be kept in storage while not in active combat.
Ludmila
A Sirin that joined the recon mission to reclaim the Dragonfang mountain. She and her unit are destroyed during the operation in Volume 5 but a backup unit returns in Volume 6, without the memories of her previous counterpart. 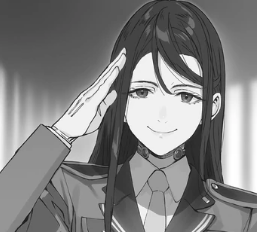 Anna Maria
Introduced in Volume 7 as Armée Furieuse Instructor for the Eighty-Sixth Strike Package. His personal name is Anna Maria. 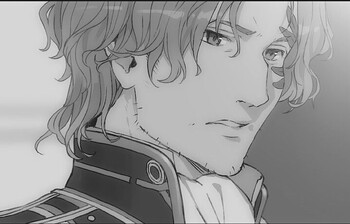 Ishmael Ahab is the captain of the Stella Maris and leader of the Orphan Fleet. 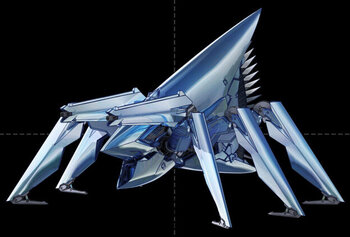 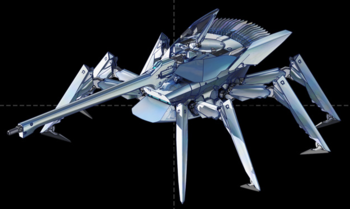 A heavy combat unit of the Legion weighing 50 tons, equipped with strong armor and a powerful 120mm smoothbore cannon along with a 12.7mm machine gun for engaging small targets.
Dinosauria 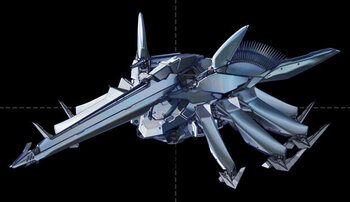 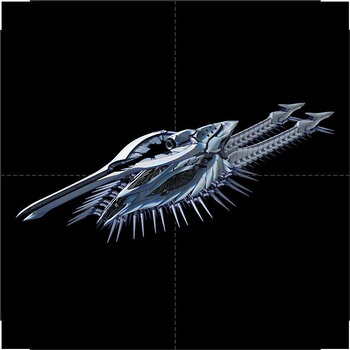 An experimental Legion railgun capable of destroying targets hundreds of kilometers away. Its massive size means that it can only move along the old high speed rail network. A second one is later constructed to defend the Mirage Spire.
Self-Propelled Mine 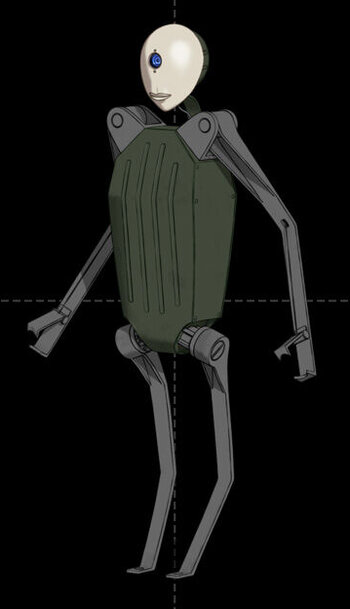 The sole Legion model built to resemble humans and the second smallest besides the Eintagsfliege, Self-Propelled Mines are suicide bombers that charge the enemy and explode.
Phönix 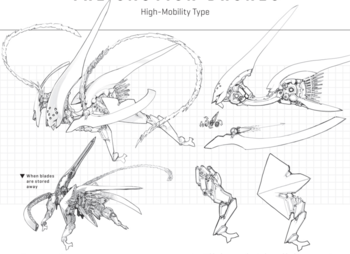 A new Legion model first encountered by Shin in the battle of the Charité metro network in San Magnolia. It manages to escape that battle and is later encountered again by the 86th Strike Package in Roa Gracia.
Skorpion 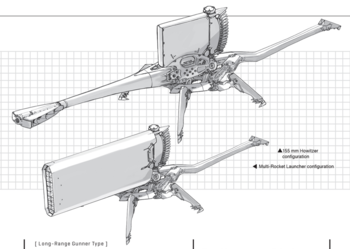 A Legion model that acts as a mobile howitzer using a 155mm cannon, with a firing range of 40 kilometers. Also capable of swapping out the cannon for a multi-missile launcher.
Noctiluca 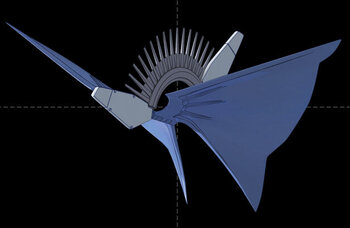 A tiny Legion model small enough to fit in the palm of a human hand, the Legion employs enormous swarms of these nanodrones, so numerous that they blot out the sun. They employ electromagnetic jamming that has shut down global communications, jams radar, and disrupts long-range guided missiles.
Rabe 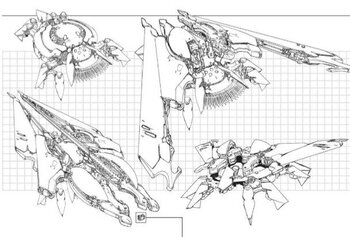 A 35 meter long Legion unit with a 90 meter catapult developed during the Roa Gracia campaign. Despite its immense size, this is a non-combat machine designed for the sole purpose of launching light units (no more than 10 tons) onto the battlefield from far away.

Voiced by: Makoto Furukawa (Japanese), Robbie Daymond (English), Ricardo Bautista (Latin American Spanish)
Shin's brother. His near-murder of Shin led to Shin's telepathy being able to detect Legion drones. He also rescued 10-year old Lena after her aircraft was shot down by the Legion. Eventually he was killed, assimilated, and put in a Dinosauria unit.
Pale Rider/Kiriya "Kiri" Nouzen 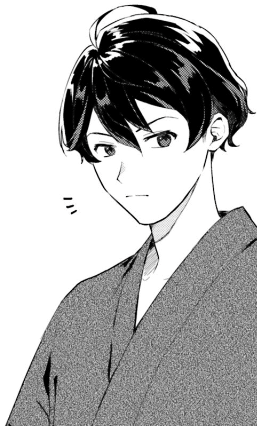 Voiced by: Yūto Uemura (Japanese), Zeno Robinson (English)
Frederica's personal bodyguard and Shin and Rei's distant relative. His constant battle against the Federacy during the civil war eventually drives him mad with misanthropy. After Frederica was captured and a bloodstained mantle was displayed as "proof" of her "death", he froze in absolute shock, which a Legion headhunter took advantage of to capture him. He's then put in command of a Morpho during the large-scale offensive.
"No Face"
Voiced by: Masaki Terasoma (Japanese)
A mysterious Shepherd serving as the overall strategic commander for Legion forces on the continent. Little is known about its past or former identity.
Merciless Queen/Zelene Birkenbaum 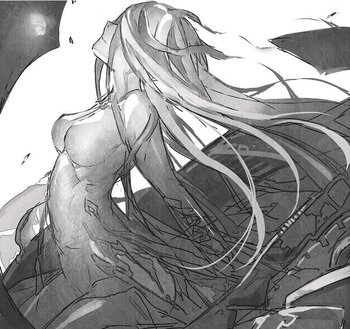 The head developer of Legion who was supposed to be dead just before the war starts, Zelene currently inhabits an unarmed white Ameise, whose model is from the earliest production batch and painted with her own Personal Mark.