Here's the list of characters categorized in the 'Others' in Dynasty Warriors, arranged in their chronological appearance in the series. Asterisk (*) mark those characters who are playable in the DLC. 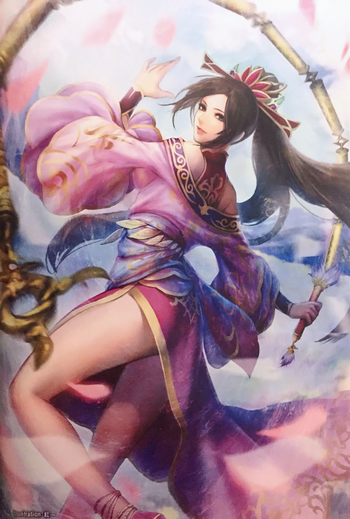 "I am ready to bring light to our darkest hour."

Diaochan is a dancing maiden who wants to destroy Dong Zhuo, on request by her adopted father. She is willing to use all of her available talents to see the despot is disposed of.

She is an elegant and patient woman who displays cunning with her charms. Normally a kind and benevolent individual, she can show a manipulative side if the occasion calls for it. She does not enjoy violence yet finds that battle is inevitable in the times she lives in.

Although she despises Dong Zhuo, her feelings on Lu Bu are far more complicated. She's also the only one to call him by his style name: Fengxian (Housen in Japanese). 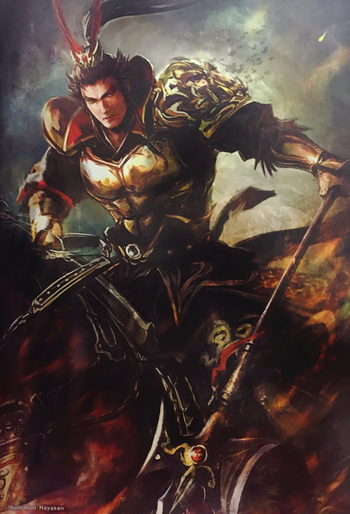 "I am the greatest warrior this world has ever seen!"

Lü Bu is one of the most feared warriors in the Three Kingdoms period. He was brought up by his adoptive father, Ding Yuan, whom he betrayed for the infamous horse Red Hare and an ample amount of gold. When he joined the ranks of Dong Zhuo, he performed many extraordinary tasks, such as fighting Liu Bei, Guan Yu, and Zhang Fei all at the same time.

While serving the tyrant, he fell in love with the beautiful Diaochan, who was then given to Dong Zhuo. To take her for himself, he assassinates Dong Zhuo, yet this was all a plan conceived by Diaochan's adoptive father Wang Yun to rid China of Dong Zhuo. Lu Bu becomes a warlord of his own accord, fighting mostly Cao Cao. In 198 AD, he was betrayed by his own men, and executed by Cao Cao.

"The Despot of Debauchery" 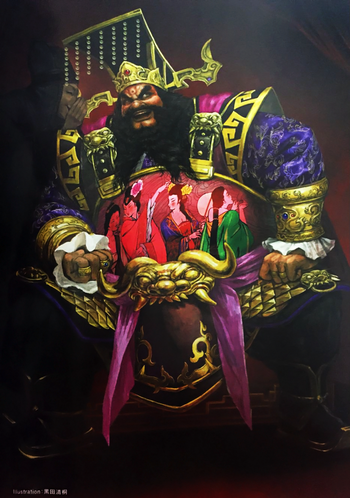 "Each day, I grow even closer to my dreams of paradise!"

Dong Zhuo is the Prime Minister during the late Han dynasty, after the consort kin faction led by He Jin and the eunuch faction wiped each other out. He was seen as a ruthless tyrant and he used the Han Emperor as a puppet in order to do what he willed. Dong Zhuo enforced his rule by having control of the mightiest man of the time, Lu Bu.

Portrayed as a repulsive and obese man, he often lets his lust and hedonistic pursuits get the better of him. This is what ultimately drives a wedge between him and his adopted son Lu Bu.

"Heir of an Illustrious Family" 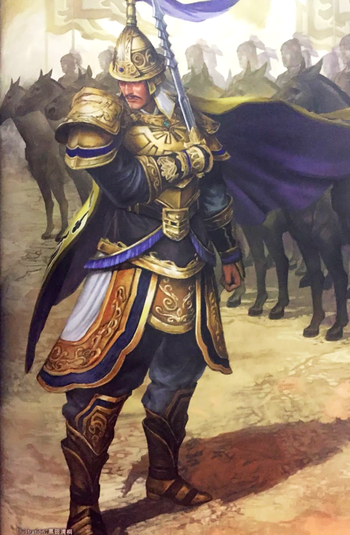 "I come from a long line of nobility."

Yuan Shao of the esteemed Yuan family is of royal blood and a prominent figure in the early Three Kingdoms period. He organized the movement against Dong Zhuo and developed a massive following in the northern provinces. He would cross paths with Cao Cao which would lead them to a decisive battle at Guan Du.

An aristocrat who can come off as snobbish, he believes that only one of wealth and privilege can unite the land.

"The Voice of the Heavens" 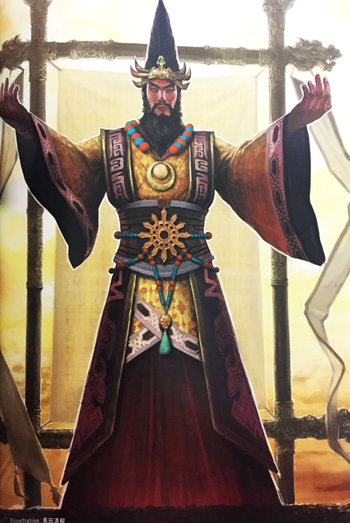 "The Mandate of the Heavens lies with the Yellow Turbans!"

Zhang Jiao (actually Zhang Jue) is the Taoist leader of the Yellow Turban Rebellion. He was the founder of the philosophy known as "The Way of Peace", which he preached to the people of China and convinced the masses to overthrow the dwindling Han Dynasty.

Portrayed as a magician with rather ridiculous mannerisms, Zhang Jiao is known to frequently mention the word "Heaven" during his over the top speeches. 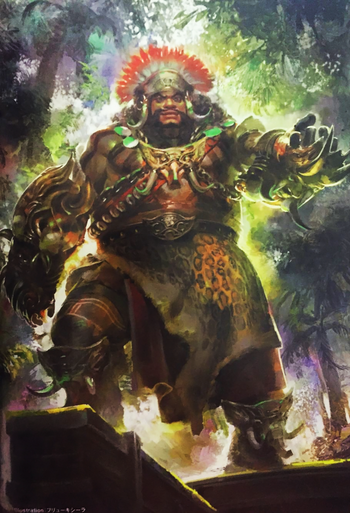 "There is no task too big for the Great King!"

Meng Huo is the King of Nanman and a powerful tribal chief among the southern tribes. While he is the official ruler, he often counsels with his wife Zhurong on matters.

Meng Huo is portrayed as a sweet but short tempered man who frustratedly attempts to outwit Zhuge Liang at every turn, but fails dismally each time. He has a very strong relationship with his troops and officers, and all consider themselves a close family with an unbreakable spirit.

"The Goddess of Fire" 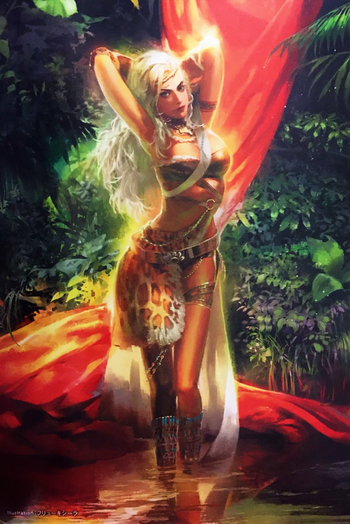 "I am a descendant of the Goddess of Fire. To know me is to know fear."

Said to be the daughter of the God of Fire, Zhurong is depicted as an aggressive and beautiful woman who often coerces her husband into action against rival kingdoms. As she finds Meng Huo's laid-back and contented nature a hindrance to the Nanman people, she sees it as her duty to inspire passion and ambition in him.

She is the only female character who actually fought in the novel, defeating two Shu generals in the battle. 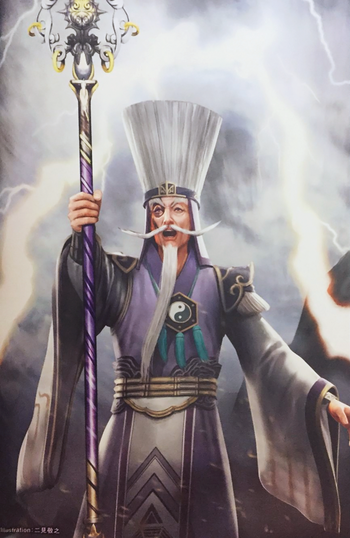 "I see fate has brought us together. Shall we?"

A mysterious mystic who appears in Dynasty Warriors 5, 8 and 9, as well as the Warriors Orochi series. He was known most for having an encounter with Cao Cao and being one who openly stated that he opposes the Wei king's rule. Historically, he was mentioned in texts written by Cao Cao's sons Pi and Zhi. note Pi mentioned him in Dian Lun (典论), while his brother mentioned Zuo in Bian Dao Lun (辩道论) Zuo also had a biography in Book of the Later Han. 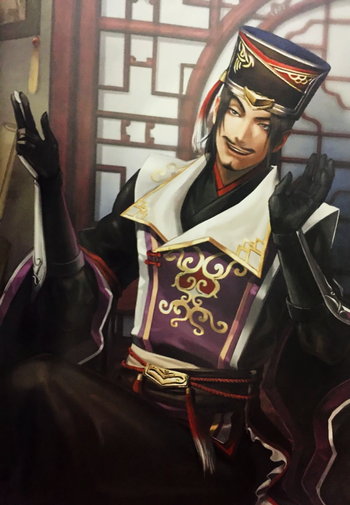 "Soon, my name will echo throughout the land!"

Lu Bu's strategist, Chen Gong was a previous minister of Dong Zhuo, until he rescued Cao Cao from execution, but quickly left after seeing the warlord's brutal nature. After Dong Zhuo's fall, he offers his services to Lu Bu and continue to serve him, through good and ill, until his demise at Xiapi. 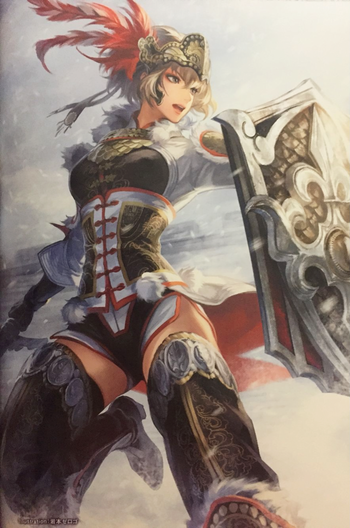 "I am the daughter of Lu Bu. It is my duty to lead everyone to victory!"

Lu Lingqi is the fictional name given to the daughter of Lu Bu and his wife in the novel Lady Yan note Historically, the identity of Lyu's wife is not certain; she could have been a sister of Wei Xu.; her real given name is unknown. Lingqi was originally offered for a political marriage with Yuan Shu's son, until that plan fell through. Her fate after her father's death is unknown. 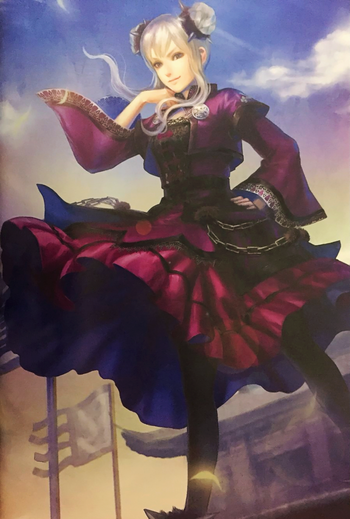 "I'll crush anyone who gives me any lip!"

The granddaughter of Dong Zhuo with an unknown father. She was given her passage to adulthood ceremony and a grand title at an unceremoniously young age despite a 50-year-old Zhu Jun's protests. For the grand ceremony, a platform was built to be five to six che –about 116 cm (3'10") or 139 cm (4'7") in modern conversions– and she rode in a blue-covered golden carriage as thousands of soldiers marched behind her. Dong Huang was said to have given her the seal personally. Dong Bai has no other mentions in historical records. 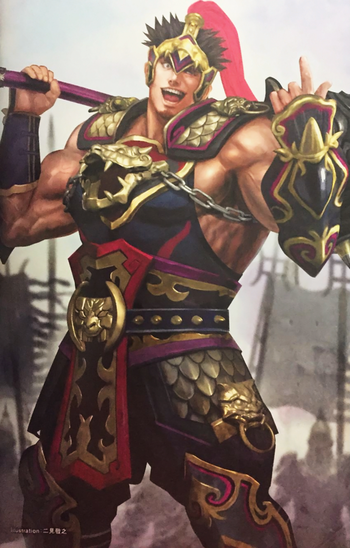 "I yearn for battle!"

A powerful general under Dong Zhuo. He plays an important role in the Battle of Sishui Gate where he prevents Dong Zhuo's enemies from reaching Luoyang. 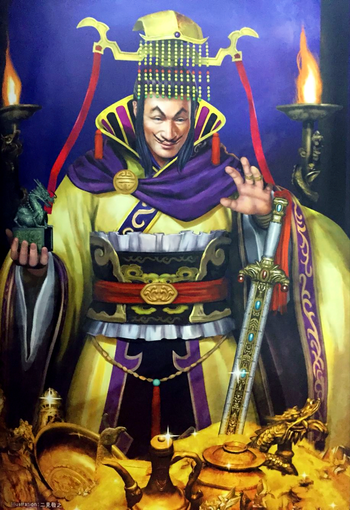 "Soon, all the land will be mine!"

The younger half-brother of Yuan Shao. note Genealogically, they are cousins, as their father Yuan Feng sent Shao away to become the heir of Feng's elder brother Cheng, who had passed away at a young age. He is a very important figure in the rise and fall of the Han Dynasty where he declared himself emperor after demanding the Imperial Seal from Sun Ce. However, this makes him as a target from various warlords which renders his "dynasty" short. Historically, he was also Sun Jian's liege lord.