The cast of Dragon Quest I. 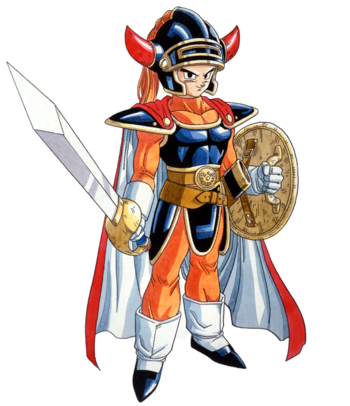 Descendant and ancestor of heroes. The hero is summoned and tasked by Lorik, King of Tantegel with slaying the Dracolord, whose monsters have overrun Alefgard, crushed the royal army and kidnapped Princess Gwaelin. The descendant of Erdrick is literally the king and the realm's last resort and last hope.

The Hero sets out to travel the monster-plagued lands, finding Erdrick's legendary Sword and Armor and rescuing Princess Gwaelin in the process. During his travels, he finds the Staff of Rain and Stone of Sunlight, and fuses both items into the Rainbow Drop to form the Rainbow Bridge, which allows him to cross the sea to the Isle of the Dragonlord.

The Hero storms Charlock Castle and battles his way to the Dragonlord's throne. After slaying the Dragonlord, the Hero returns to Tantegel and is offered the throne and Gwaelin's hand. He turns the kingship down but he marries Gwwaelin, and the newlyweds set off on a journey to explore new, uncharted lands beyond Alefgard.

Tropes associated with the Hero: 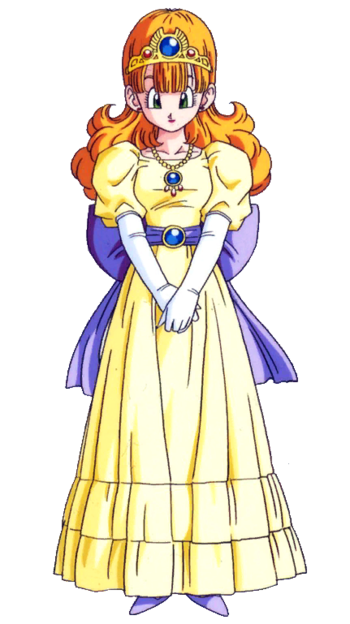 Daughter of King Lorik of Tantegel, Princess Gwaelin was kidnapped by the Dragonlord's minions and imprisoned in the Swamp Cave at the south of Kol, where she was being constantly watched by a green dragon. During his quest, the Hero found Gwelin and reunited her with her father after slaying the guardian dragon.

After fulfilling his mission, the Hero visited Lorik and Gwaelin. Gwaelin, who had fallen for the brave hero who rescued her, proposed to the Hero, who accepted. After their wedding, the Hero and the Princess set off on a journey beyond the lands of Alefgard.

Tropes associated with the Princess: 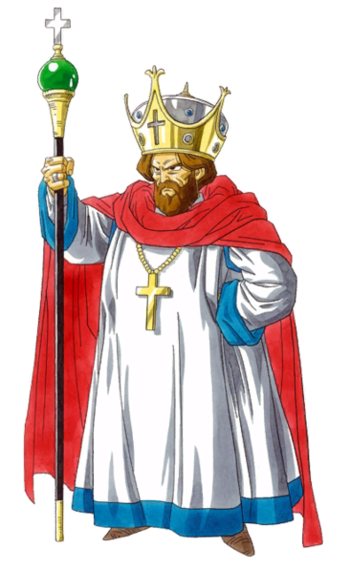 His country had been generally peaceful until the Dragonlord rose and his monsters started overrunning the land. After the Dragonlord's first attack, Lorik's army had been defeated, the Ball of Light had been stolen and his daughter had been kidnapped. After that disastrous battle, his subjects didn't dare to walk past the walls surrounding the surviving settlements because hordes of monsters roamed freely the wilderness.

Many warriors voluntereed to kill the Dragonlord, but all failed. The King had given up hope that his kingdom would be saved when he was visited by the descendant of Erdrick, whose coming was foretold by the seer Mahetta (or, depending on the version, the King summoned the descendant). Feeling his hope renewed, Lorik gave the warrior some few items and gold coins and sent him out.

After the descendant proved his trust was not misplaced, Lorik offered his throne to him, but the Hero declined his offer. However, the Hero accepted Gwaelin's proposal of marriage, which was joyfully blessed by Lorik. 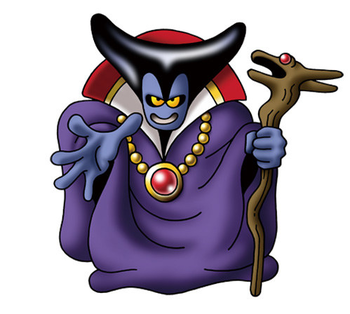 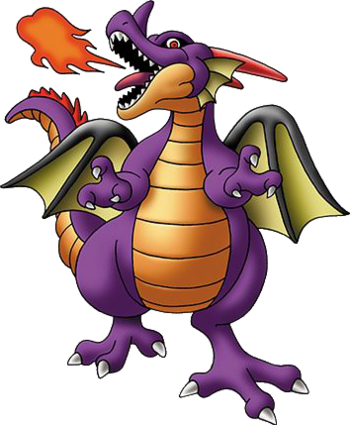 Before becoming the Dragonlord, he was a seemingly ordinary man who lived by himself in a cave far from Tantegel out of distaste for the peaceful kingdom. While exploring deep within the cave, the man learned he could command monsters and wield powerful magic.

Naming himself the Dragonlord, the sorcerer rebuilt Charlock Castle and unleashed hordes of monsters that scoured Alefgard.

Tropes associated with the Dracolord: 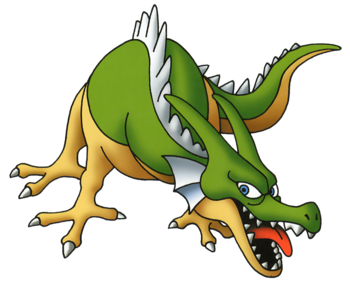 An unnamed dragon who guards Princess Gwaelin in the Swamp Cave, at the Dragonlord's behest. 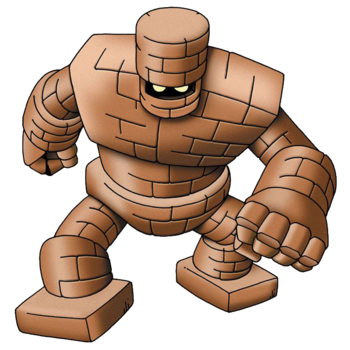 The Golem was an artificial being created by one of Cantlin's townspeople to protect the town after the arrival of Erdrick during the events of Dragon Quest III.

Unfortunately, it cannot tell the difference between friend and foe, and attacks the Hero when he tries to step into Cantlin, whereupon he is forced to destroy it.

The only non-optional mini-boss in the game. 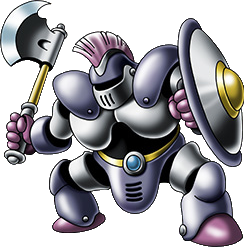 A demonic knight who guards Erdrick's armor in the ruined town of Hauksness.