Living deep within the jungle, the beasts of Bozack have become totally self-sufficient since the attack of Madruk. Before, they relied heavily on the surrounding nations for their necessities, but that changed forever after Madruk destroyed much of their lands. Now, they have very few dealings with their neighbours, and trust no one. Bozack, unlike other nations, tends to be more of a democracy rather than a monarchy. However, its people still look to their leader, Gongos, for direction.

The forestry and agricultural industries are Bozack's main sources of income. Bananas are one of their chief exports. With the exception of manufactured items, there is little need for the import of other products. The beasts tend to live in a rather anarchial society; however, they do obey the laws set out by their monarch...most of the time.

Located at the south-west part of Legendra, Bozack is surrounded by the ocean to the east, west, and south. The only route out of the country is to the north. This, combined with dense forests, severely limits the possibility of a surprise, land-based attack on its capital. 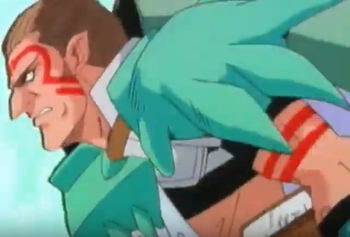 Class: Beast
Despite his diminutive appearance, Gongos rules the jungles of Bozack with the strength of a thousand beasts. He is a very generous and chivalrous person who hates crafty strategies and unnecessary plunder. He is held dear by his subjects, who have named him "The Guardian of the Forest".
Nirutaba
Nirutaba keeps Gongos informed on the war. He also helps to plan military strategies.
Rygar
Class: Beast
As Gongos' childhood friend, Rygar and Gongos have a close friendship, said to be sealed in blood. He is the eldest of his family, and is noted for his calm demeanour and clear thinking abilities.
Baghib
Class: Beast
Baghib lacks the mental discipline of a trained soldier. He tends to fly off the handle at even the most minor annoyances. Due to his quick and violent temper, he feels that he is unstoppable in a fight.
Katt
Class: Spirit User
Katt has a deep respect for her two older brothers; however, they tend to stick her with the responsibility of caring for Yuni. With her quick temper and magic skills, she makes for a fearsome opponent.
Advertisement:
Yuni
Class: Beast
Yuni is the baby in her family and is used to getting what she wants. She tries to make herself a dangerous fighter; however, she still tends to act like an immature, spoiled brat.
Gunner's army (Gunner, Rykker, Norse, and Silva)
Classes: Beast (Gunner, Silva), Knight (Rykker), Fighter (Norse)
Exiled by Gongos' father for trying to take Bozack's throne for himself, Gunner is ambitious beastman who wants to be King of Bozack, thinking that Gongos' family are weak monarchs. The descendant of Leviathan, a former Bozack King and member of a previous Dragon Force.

Silva is his partner/right hand woman. Norse and Rykker are merely mercenaries who don't share his ambitions or ideals.