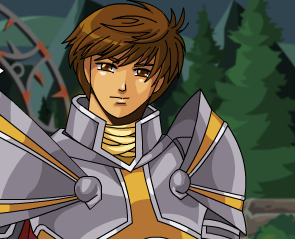 "My name is Artix von Krieger and I am a Paladin who has dedicated his entire life to battling the undead."

A paladin with an uncontrollable compulsion to slay the undead. Prone to making groan-worthy puns. He is involved in several storylines in the game, but his most prominent one is in the "Darkness Orb" Saga where he and the Hero infiltrate the Necropolis and fight Noxus. He is also a key ally in the fight against Caitiff in Book 3. 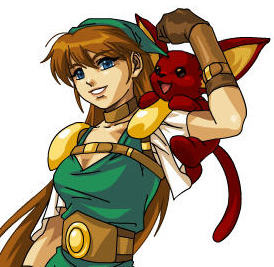 "Robina the Hood at your service. Steal from the rich, give to the.... cute little cuddly wuddly forest creatures!"
Click here for her Book 3 appearance. 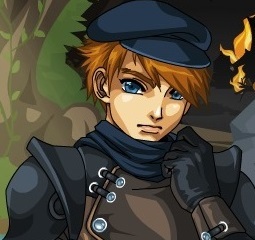 In her own words: "Robina the Hood at your service. Steal from the rich, give to the.... cute little cuddly wuddly forest creatures!" Well, that explains how those monsters got all that gold. 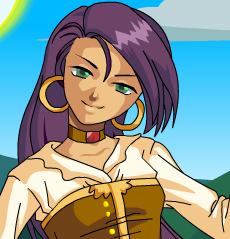 "Why hello there Adventurer! I'm Valencia, world famous rare item hunter! Could I interest you in this rare statue? Only 1 Billion gold!"
Click here for her Book 3 appearance. 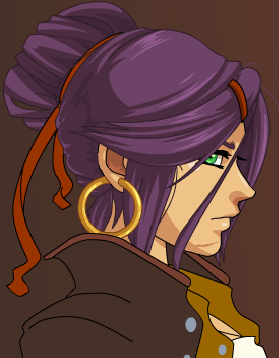 A rare item hunter who took over the "family business" after her father went missing in search of "The Ultimate Treasure". She is eventually reunited with her father, but he turns out to be a villain. Often an ally to the Hero, most prominently during the "Dragon Egg Saga", "Earth Orb Saga", and several "Valtrith" quests. Has something of a rivalry with Symone DuBellmount.

Warlic
Click here for him in his younger years. 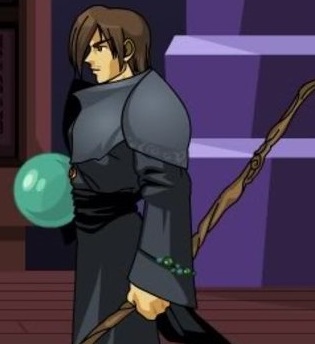 The Blue Mage is one of the most powerful NPCs in the game. In fact, he's so powerful that he rarely interferes in anything because he can't risk his power getting out of control. Has a rivalry with Xan that goes way, way back. 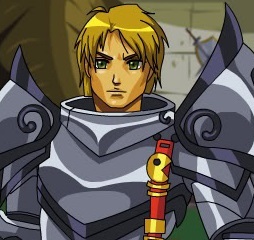 "Welcome to Oaklore Keep, home of the honorable Knights of the Pactogonal Table."
Captain of the Knights of the Pactogonal Table. Loves tormenting The Hero with his insanely difficult Code Monkey Challenges. After the Time Skip, when The Hero finally breaks free of his/her prison, Rolith gives a quick rescue and brings The Hero up to date on recent events. He returns during the "Calamity" Saga, where the Hero recruits him and Alina to help rescue Draco from the Darkness and stop Caitiff once and for all. 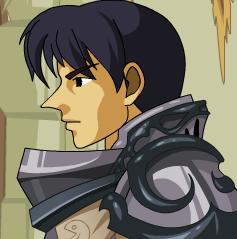 "Greetings, <Character>, and welcome again to Oaklore Keep. Rest a bit, I'm sure your travels have tired you and I have a proposition for you."
A recently knighted Pactogonal Knight who asks The Hero to help him become a true hero and live up to his family's reputation. 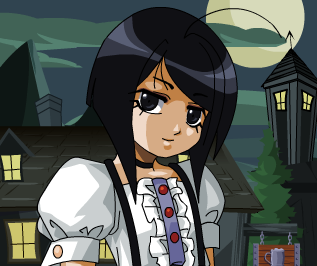 "Welcome to Amityvale, <Character>! Where it is a beautiful night every single day!"
Click here for her Book 3 appearance. 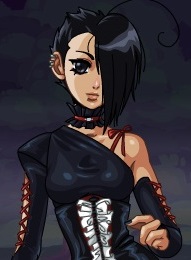 A longtime resident of Amityville and a friend of Raven by Book 3, she appears to have some connection to its mysterious events. she turns out to be a descendant of the vampire Lord Frydae XIII. 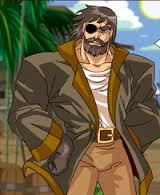 "Avast ye scurvy dog! You can call me Rhubarb. If you need something in Osprey Cove, you come to me. We pirates trust nobody."
Click here for him post-Wind Orb. 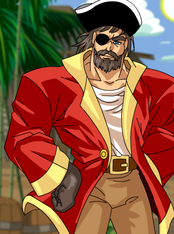 The first mate of the Red Betty who resides in Osprey Cove, later becomes Captain when Blackberry turns out to be a traitor. He reappears in Book 3 when Sho'Nuff Island is attacked by Caitiff's forces and the Hero convinces the pirates and ninjas to team up against the common threat. 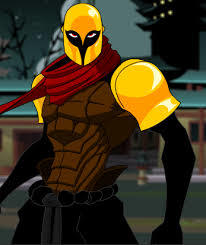 "Greetings <Character>. I am Thyton, leader of the Shadow of the Wind Clan of ninja here on Sho Nuff Island."
A Ninja leader who is after the Jewel of the Four Winds actually the Wind Orb who recruits the player for help. He reappears in Book 3 when Sho'Nuff Island is attacked by Caitiff's forces and the Hero convinces the pirates and ninjas to team up against the common threat. 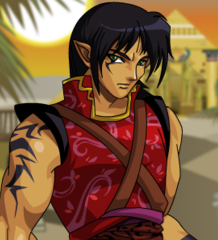 some caption text
A Ranger and Bounty Hunter introduced in the "Light Orb" Saga who initially works for Sek-Duat XV, but switches sides after being told that Sek-Duat XV doesn't intend to pay him. He later becomes an ally of The Hero, after seeing the error of his ways, and becomes one of the regular heroes of Falconreach. He returns in Book 3 where the Hero discovers he is actually Sek-Duat's last living descendant, and that Sek-Duat was draining him, before being saved by the Hero. He is also recruited as an ally in the fight against Caitiff. 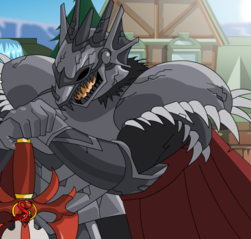 some caption text
Click here for him with his head in a paper bag. 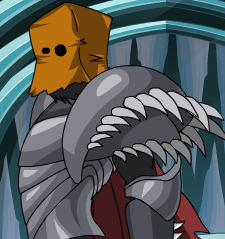 A Dragonslayer and an ally of The Hero. Despite his hatred of dragons, he accepts that The Hero is a DragonLord at the end of the Ice Orb saga. The fact that he seemingly hadn't noticed The Hero's Dragon up until that point is Hand Waved by him claiming he thought the dragon was a horribly deformed dog. In Book 3 he returns, now relinquishing his strict ideology of killing dragons on sight, having accepted they are endangered due to the actions of the Rose. He is also one of the allies recruited by the Hero in the fight against Caitiff.

The king of the Killy Willy Kilguin Tribe, who is a small penguin.

The shaman of the Ursice Savages, a polar bear species.

The lorekeeper of the Tuskers, a walrus species.

Galanoth's blood brother from his adoptive family. He helps the Hero defeat Akriloth and later uncovers the threat about Drakonnan, but is killed by the villain. 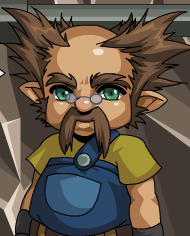 A Gnome of Popsprocket and the Technomancer trainer. 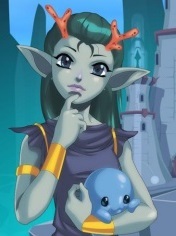 Another surface dweller? Can't you stay on land? Why do you have to keep invading my home?
Believed to be the last Water Elf, Aquella resides in the Locker where she tries to keep humans and their litter away from the ocean floor. She is Arc Hero of the Water Orb Saga.
Diawe & Caran

Two DeathKnight twin sisters who are former members of Davey's crew, who help out the hero.

Guardian Fortuna
The team leader of the Guardians fighting Gorgok's army. She is the Quest Giver of the Earth Orb saga.
Fae
A character who first showed up in beta and had fans before she made her first "official" appearance in the Nature Orb saga. Turns out she's had possession of the Earth Orb for the last 1000 years. 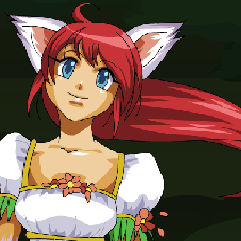 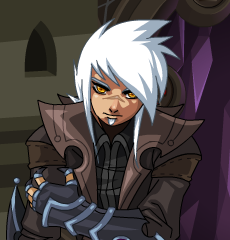 "I am Tomix, a Soulweaver on a mission."
Click here for his Book 3 appearance. 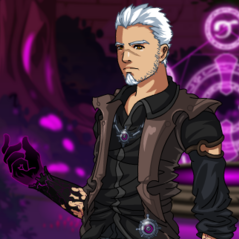 A SoulWeaver who accidentally released seven corrupt elemental spirits on the world, and has dedicated his life to hunting them down and banishing them. He is the Quest Giver of the Tomix Saga questchains in both Book 1 and Book 3. 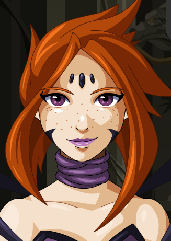 "I can take care of myself, thank you very much!"
Click here for her Book 3 appearance. 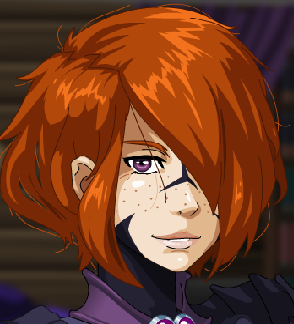 An arachnomancer that Tomix and the Hero encounter in Ravenloss, whom Tomix develops a crush on. She gets possessed by Envy/Aspar who uses her for his own ends.

A spirit who becomes the Hero's Soul Ally, allowing the player to become a SoulWeaver. 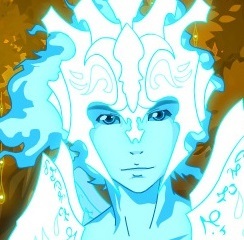 Greedling
Formerly a loyal underling of Greed, who the Hero takes pity on. It ends up betraying the Hero for Greed, but after Greed is killed it asks for forgiveness and can be adopted as a pet.
Void Ship Crew

A pirate captain from Osprey Cove, and later admiral. Tomix and the Hero go to her for help to sail through the void in their quest to stop Envy. Afterwards she becomes a reoccurring character for pirate related quests. She reappears in the Caitiff questchain where Sho'Nuff Island is attacked by darkness with the pirates and ninjas, believing each other are responsible before the Hero intervenes. She also regularly in "Talk Like A Pirate Day" events.

A Popsprocket gnome under the guise of the "Mysterious Gnome", who later gets recruited as the engineer for the Void Ship in Book 3. 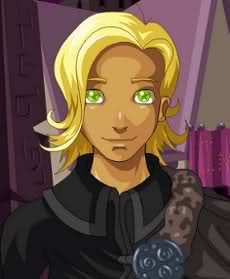 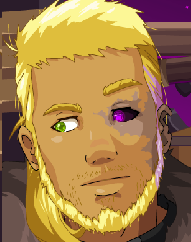 A former classmate and childhood friend of Tomix, who ends up becoming a teacher at Edelia School of SoulWeaving. In Book 3 he is in a relationship with Riadne, but is ill. He is recruited as a member of the Void Ship Crew.

An Atalean who is destined to become the servant of the Hero and Tomix.

An old, mysterious man who is hailed as the savior among the Ateala of Atrea, yet has a mysterious connection to Wargoth.
Apprentice
See Drakonnan at Dragon Fable Other Antagonists
True Mortal

A mysterious Spirit Warden who guards a Sealed Evil in a Can that lies behind his portal.

The Leader of the Sulen'Eska La Résistance who decided to come out of hiding as the threat of the Rose grew. She's a wind elf who uses her wind powers to repel enemies. 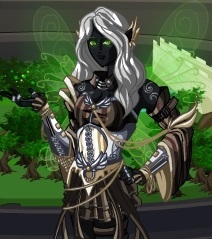 A MageKnight who was once loyal to King Alteon before being exiled as the King fell into the Rose's influence. Now based in the Shears

A Dragonrider who is part of Sulen'Eska's resistance against the Rose.

A mage who is part of Sulen'Eska's resistance.

A fairy princess who is allied with Kara SuLema and a fierce armored warrior.
Dracelix

An Elven Paladin who resides in Swordhaven, offering his weapons in exchange for crystal shards found in local quests. After the timeskip, he becomes part of Sir Leon's army.

A monster hunter, and the last living member of the DuBelmount clan. Symone aims to avenge the death of her family. When she is first encountered, she is trying to remove Baron Valtrith from Doomwood, and has been at it ever since. Has something of a rivalry with Valencia Surehunter
Thom and Ralon
See Thom and Ralon at Dragon Fable Holiday Characters
Verlyrus
See Verlyrus at Dragon Fable Other Characters

An elderly hero from the other side of the planet and noted to be one of Lore's greatest, on par with the Hero.