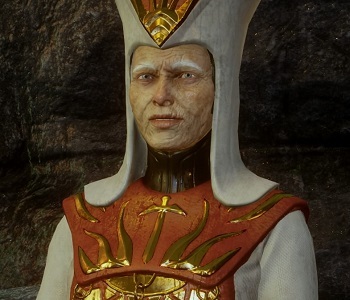 The head of the Chantry. She had been investigating the treatment of mages and possible alternatives prior to the rebellion, but traditions were too ingrained for her to make real change. She managed to convince both the mages and the Templars to attend a conclave at the Temple of Sacred Ashes, which was subsequently destroyed at the start of the third game. 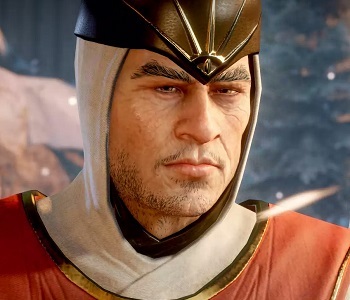 A man from the Chantry who came to the Conclave with the Seekers and the Divine. He dislikes the Inquisitor, and believes them responsible for the Breach. 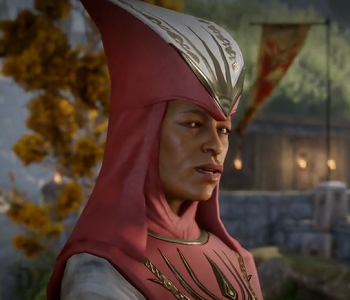 A Revered Mother from Orlais who came with the Divine, but did not go to the Conclave. After the explosion, she started tending to wounded refugees in the Hinterlands, not far from Redcliffe, and joins with the Inquisition to help gain some Chantry support in Val Royeaux. 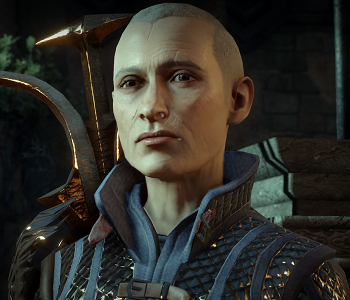 "I stand against the Blight, and no man, no Inquisitor, and no magister will get in my way."

The Warden-Commander of Orlais who appears in the Adamant Fortress missions. 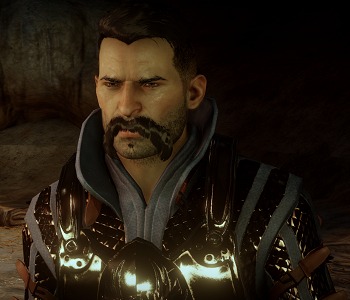 Voiced by: Stephane Cornicard
"Being a Grey Warden is not a cure. It is a calling."

Jean-Marc Stroud is a high ranking member of the Orlesian Grey Wardens. He's first encountered in Dragon Age II, and can help save Hawke's sibling from the Blight if they get Tainted in the Deep Roads, and possibly during the Qunari invasion of Kirkwall. If Loghain is dead and Alistair is dead or no longer a Warden, he will return in Inquisition. He is one of the few Grey Wardens who were not corrupted, though he does hear Corypheus's false Calling. 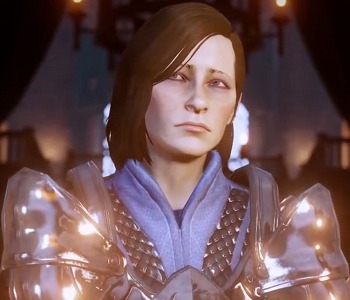 "I can't use the greater good to justify my crimes, as if it would create a future I could be a part of!"

An Orlesian senior Warden. Following the Siege of Adamant, she willingly allows herself to be tried by the Inquisition. If the Inquisitor so chooses, she can be pardoned and end up joining the Chantry, where her efforts support the Inquisition. 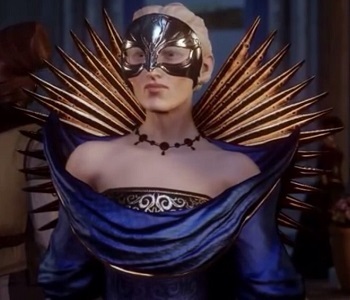 The Empress of Orlais, Celene ascended to the throne at the age of 16 after overthrowing her uncle, Emperor Florian. She has grand ambitions for her empire, but her political power has greatly weakened in the wake of the Fifth Blight and the mage revolution. Many of these tropes are only known if the player has read The Masked Empire, as she doesn't have enough screen time in Dragon Age: Inquisition to reveal them all. 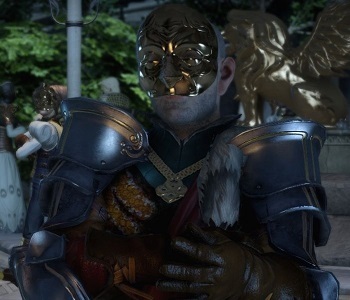 Gaspard is an exceptionally skilled and chivalrous Chevalier and one of the most powerful nobles in Orlais. He was the presumptive heir to his uncle, Emperor Florian Valmont, but the political machinations of his cousin, Celene Valmont, denied him the imperial throne. Gaspard believes that Celene's cooperation with the Divine and Ferelden is a sign of weakness and seeks to install himself as Emperor. 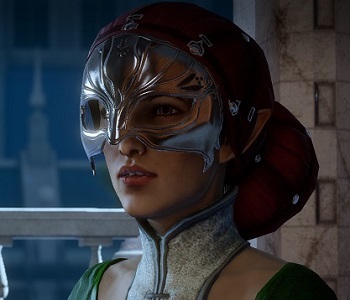 The leader of the elven rebellion and Orlais and a (rumored) jilted lover of Celene.

The Witch of the Wilds, who accompanied the Warden during the Fifth Blight and disappeared soon thereafter, now returns with motives of her own. 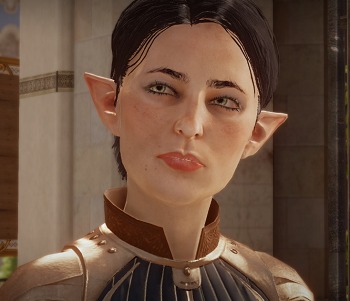 Voiced by: Ève Karpf
"I came to the Circle from the Grey Wardens because I saw something had to be done. In the Wardens, we learn to watch for our moment and seize it— and that moment is now."

Former Grey Warden and Grand Enchanter of the disbanded College of Magi. After the events of Asunder she and her fellow mages took shelter in Redcliffe. 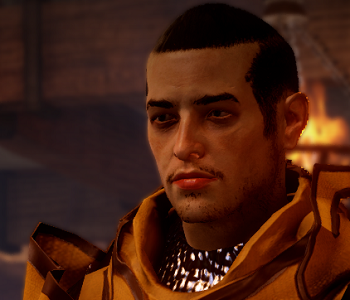 "There are worse things than dying, Dorian."

Felix is the only child and heir of Magister Gereon Alexius. His mother died in a darkspawn attack en route to Hossberg and Felix caught the Blight from the attack, resulting in him suffering a slow death. 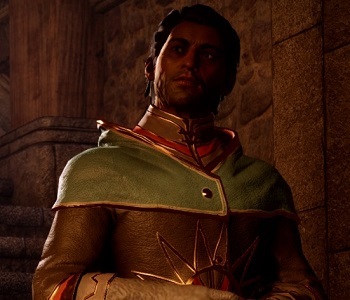 Dorian's father, Lord of Asariel, and a well-respected member of the Magisterium. He is mentioned often by his estranged son, and appears in Dorian's personal quest, "The Last Resort of Good Men." 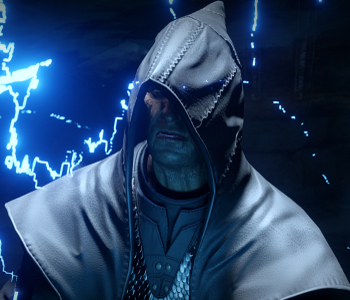 Calpernia's former master and a scholar of the Old Gods, Corypheus bound him with a ritual that tortures him to answer every question truthfully. This was in preparation for Calpernia once she drinks from the Well of Sorrows, so that Corypheus could bind her with a perfected version of the same ritual. 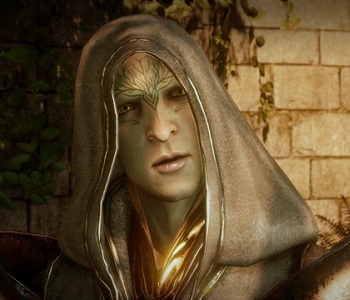 Voiced by: Matthew Gravelle
"We awaken only when called, and each time find the world more foreign than before. It is meaningless. We endure."

One of the Ancient Elves guarding the Well of Sorrows in the Arbor Wilds, he awakens from dormancy only to defend the Well from potential defilers.

Hawke
The Champion of Kirkwall, who disappeared some time after the Annulment of the Kirkwall Circle. 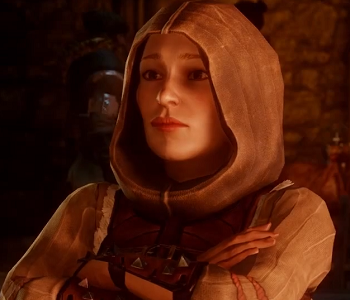 The original Bianca, a surface dwarf mechanic and member of the Dwarven Merchants' Guild. She's a contact of Varric's who may have had something going on with him in the past.

The mercenary company led by The Iron Bull, following him if hired by the Inquisition. 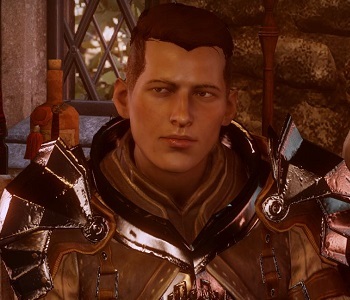 Second-in-command of the Chargers, Krem is a warrior from Tevinter. 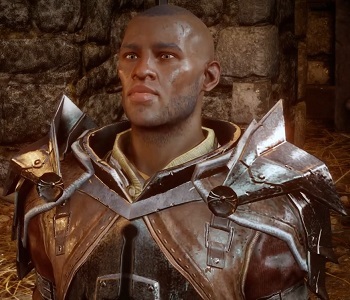 A Templar who serves at Therinfal Redoubt. He marshals a defense of the remaining Templars to save themselves from their corrupted brethren and pet demons. 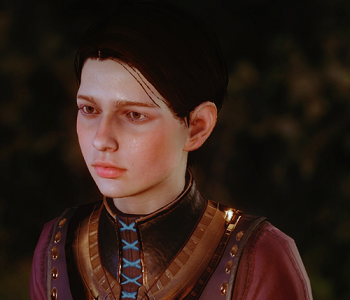 Played By: Odin Black
"People fear the next age if it comes too soon."

Should she have been romanced in Dragon Age: Origins and/or have performed the Dark Ritual, Morrigan's son Kieran will join her when she arrives at Skyhold. 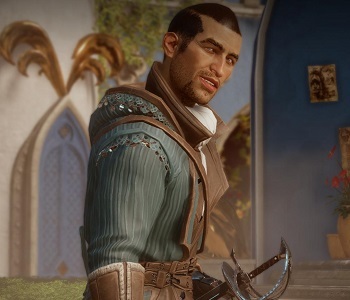 A lord from Antiva. If the Inquisitor decides to romance Josephine, she finds out she has been engaged to Lord Otranto. The Inquisitor must deal with him in order to complete her romance. 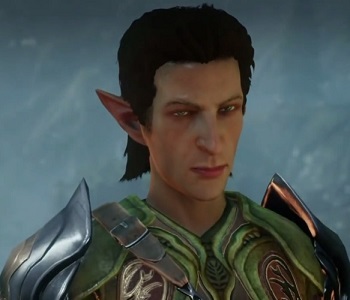 "I like my place and knowing it's the right place."

A Ben-Hassrath agent and friend of the Iron Bull. He is sent to help coordinate the alliance between the Inquisition and the Qunari against the Venatori. 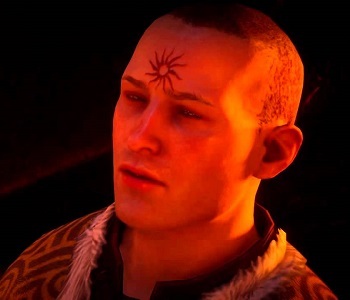 A Tranquil mage from Kirkwall, Maddox was acquainted with Samson and joined him when Samson founded the Red Templars.