This is part of the character sheet for Dota 2. This page contains all NPCS.

The rank-and file soldiers of the Radiant and Dire. There are several varieties of creeps, such as ranged creeps and siege creeps, which spawn at different intervals. Killing creeps gives every hero within a radius experience points, and landing the last hit on an enemy creep rewards you with gold. Most of the early game revolves around killing as many creeps as possible while denying the enemy team the same opportunity.

A creature to carry items to and from your team's base, each hero starts with their own courier. Like a hero, the courier possesses an inventory with 6 slots, but cannot use the items. Losing the courier is devastating as not only will it be unable to carry your stuff, but its inventory will be off-limits until it respawns, and you'll also lose your passive gold income.

As your hero levels up, so too does your courier, gaining movement speed and health and generating more gold for you over time. At level 5, your courier upgrades to a Flying Courier that can bypass terrain. At level 10, it can gain a brief surge of speed. Level 15 allows the courier to deploy wards, level 20 allows it to briefly turn invulnerable, and finally, a level 25 courier gains the ability to use items.

Voiced by: Sam A. Mowry
The unknown owner of the Radiant Secret Shop. He collects valuable items and sells them to heroes on the battlefield.

The Shopkeeper's bird that runs errands for him, and acts as a tutorial guide. 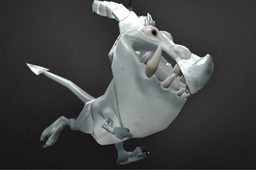 "Where do these greevils keep coming from?!"

Couriers introduced in the Diretide, and the key characters of the winter holiday Frostivus event.

An event boss that appeared in the New Bloom Festival of 2014.

A gag meta character who is usually blamed for every kinds of bugs happening in the game, portrayed as a stick figure wizard. Every heroes have a line or two about cursing his name.

Dark Moon is an event that ran from 26 January to 6 February, 2017. A team of 5 players defend against an onslaught of hordes for 15 rounds. Different enemies spawn each round with the spawns becoming harder every round.

Siltbreaker is a multiplayer campaign for owners of The International 2017 Battle Pass. It comes in two Acts. Teams of four players engage in a mission to complete objectives in an action role-playing environment.

Crypt of the Odobenus Legion

A werewolf leading several marauding packs of in the Howling Weald.

The warlord of the ogres dwelling in Bonemeal Ridge. He's captured a number of creeps that were defending a nearby town, who need to be freed.

The enormous broodmother of the spiders lurking within the Silkmire pass.

Two massive statues guarding the end of the Temple of Ermacor. They come to life to kill the heroes when the latter are attempting to leave the temple.

A massive scorpion created by Siltbreaker some time in the past. He's become active recently and his influence is spreading throughout the Shatterblast Canyon.