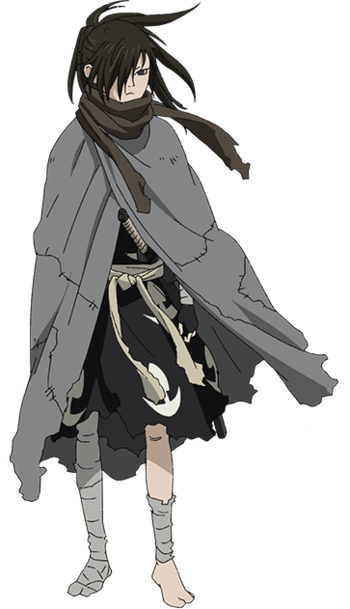 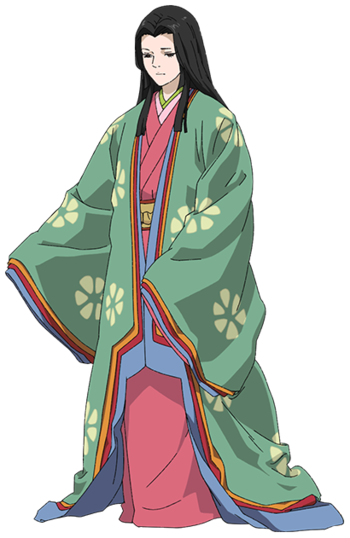 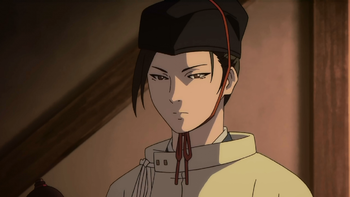 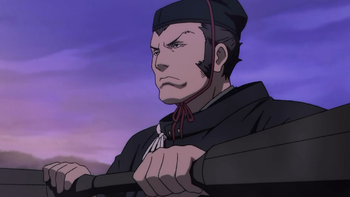 Deiki
Deiki is a demon made of mud and trash. It attempts to devour Dororo, only to be interrupted and slain by Hyakkimaru.
Bandai
The lizard demon with the tail that can take on the appearance of a beautiful woman. Disguised as a disabled woman, it has taken over a village.
Advertisement:
Nihiru
A demonic sword that thirsts for blood. It takes over the body and soul of its owner in order to quench its endless thirst.
Ariijigoku
The demon resembling a gigantic antlion that has taken up residence in a remote area of Daigo's lands.
Nokosaregumo
The gigantic centipede demon that terrorizes a village, demanding they periodically offer up a bride for it to eat lest it wipes out the entire village.
Kyubi
The demon that possesses the Banmon at the boundary of Daigo's lands. Initially appearing as numerous fox spirits, they can combine to become a large fox with nine tails.
Hakumenfudo
The statue of Buddha that is possessed by an evil spirit. It uses Okaka to bring living sacrifices so it can steal their faces.
Maimai-onba 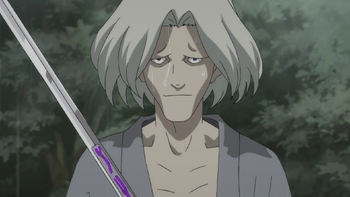 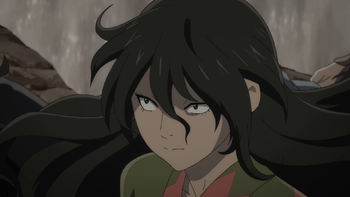 A young lady who lived in a small cottage which Dororo and Hyakkimaru encountered along their journey. She initially appeared to be a kind, compassionate individual, allowing the two to stay in her cottage for shelter. However, she was, in truth, the spirit of a Buddha Statue carver who lived a very long time ago. She was resurrected by a vengeful spirit that resides within the stone Fudo Buddha statue which she carved in her previous life, to find the perfect face for it.
Sabame 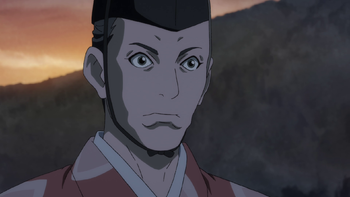 The landlord of a mountain village that appears in "The Story of Sabame" and "The Story of the Scene from Hell". In the 2019 anime, he willingly formed the contract with the demoness Maimai-onba, providing her brood with food and shelter in exchange for their protection of his mountain village.
Shiranui 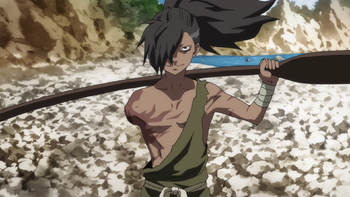 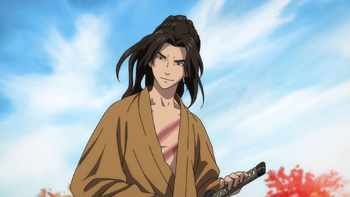 A man whom Dororo and Hyakkimaru encounters in the mountain during "The Story of the Nue". Initially appearing helpful to the duo as he leads them to the place in the mountain where Nue frequents, he reveals his intention to feed them to the demon once Hyakkimaru starts fighting Nue. In the past, Nue devoured his mother right in front of him and he ran for his life instead of protecting her. As it effortlessly crushed his fellow villagers who offered to help him get revenge, he instead convinced himself that there is nothing one can do against such monster and submitted himself to it, luring travelers into its territory so it can devour them. 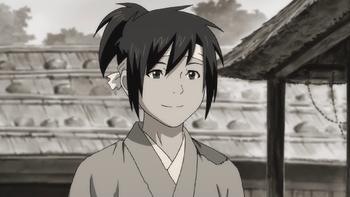 Jukai's former disciple. He left his master after knowing that Jukai used to work for Lord Shiba.
Osushi 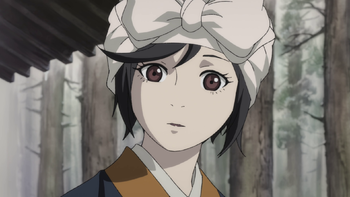 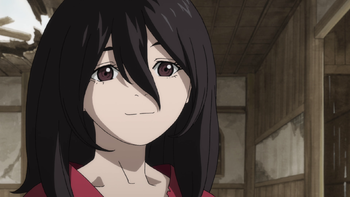 A girl who takes care of war orphans in an abandoned temple. Unlike in the manga, Hyakkimaru meets her in the present.
Hibukuro and Ojiya

Dororo's deceased parents. They led a gang of bandits who rob samurai.
Okowa 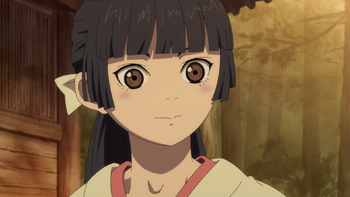 The daughter of Munetsuna and also the second love interest of Hyakkimaru after Mio.
Munetsuna 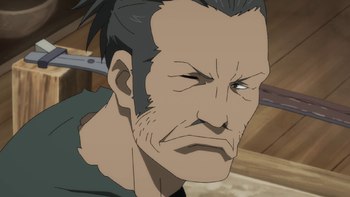 The father of Okowa and is known as the best swordmaker in the land. He is the one who sharpened and fixed up Hyakkimaru's arm blades. Although he makes a living by making swords, he has expressed discontent with the products he has made and wishes that he would make a sword for peace and not bloodshed.

The spirit of a traveler who became the first victim of Bandai.
Jisho Nun Ghost

The spirit of a deceased nun and a minor character who once ran an orphanage in the mountains. Some time ago, she, along with the orphans and the orphanage, burned down in a fire caused by Sabame after discovering that the landlord had made a pact with Maimai-onba to keep the land prosperous by sacrificing travelers and animals to feed the demoness and her offspring.
Jorogumo

A ghoul taking the form of a giant spider with the ability to shapeshift into a beautiful woman. Hyakkimaru attacks her, but she manages to escape and ends up falling in love with Yajiro, a human from the neighboring village. Unlike other ghouls, she does not kill humans, instead nonlethally feeding on their spiritual energy. She is also known as "Ohagi", the name Yajiro gave her.
Yokai Kozo

The benevolent spirit vessel that houses the deceased children who once lived in an orphanage in the mountains. Some time ago, they, along with the nun, and the orphanage itself, burned down in a fire by Sabame after they discovered the landlord made a pact with Maimai-onba to keep the land prosperous by sacrificing people to feed the demoness and her offspring. Since then, the orphans who were sacrificed came together and created this spiritual form.
Midoro
A flaming horse Hyakkimaru rides. She was once a normal horse and had a foal. She was blown up by Daigo's men and later revived by possessed armors, becoming a powerful flaming steed to help Hyakkimaru.