Note: The following page includes characters and tropes from the serialized manga, the "official fanbook" and other comic anthologies(!) Bonus volumes of assorted comic stories and info, some by different authors, to go with the manga volumes. Uniquely, the official fanbook is solely by the creator 774. and the pre-serialization doujinshi. It may contain untagged spoilers for older chapters, so beware if you're not caught up with the manga!!! 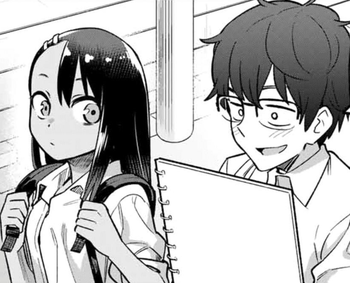 Nagatoro and Senpai in a rare moment of peace

Nagatoro and Senpai are a couple of high school students at Kazehaya High School. Her, a popular, athletic and attractive girl in first year, and him, a lanky, twitchy, antisocial and dorky boy in second year, spend their afternoons together at the Arts Club room where she endlessly henpecks him.
In General
Hayase Nagatoro

Will you keep running away from your weakness? Well, it's fun looking at someone as awful as you, but don't you want to get better? Do you want to stay awful like this? Awful Senpai ♥ Hey, hey; What will you do?
—Nagatoro, Ch. 4.5

Hayase Nagatoro, Nagatoro for short, or "Hayacchi" to her friends and classmates, is a freshman highschooler with a sadistic streak. Takes an interest in her upperclassman after seeing his artwork.

Top: Senpai in the manga; Middle/Bottom: Senpai in his first and last appearances from the Pixiv sets

I-if someone sees this(!) Nagatoro sitting on top of Senpai, who's prone on the floor, it'll cause a misunderstanding!!
—Senpai, Ch. 5

The manga's protagonist and focal character. A twitchy, nerdy and shy aspiring artist, and Nagatoro's upperclassman, he starts to fall in love with her despite her bullying. 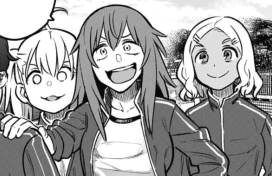 We really do live in different worlds... it's like... jaguars barging into a mole's burrow on a whim!!
—Senpai, in reference to Nagatoro and her friends, Ch. 27

The clique of social school girls whom Nagatoro belongs to. They are considered quite beautiful and very popular, frequently rejecting boys trying to win their affection. Three have been shown in the manga so far, with a fourth (Yukko) mentioned only by name in the first chapter.
In General
Gamo-chan 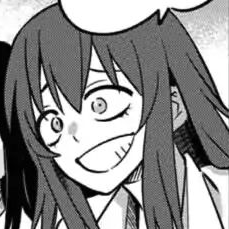 The nominal ringleader of Nagatoro's clique. She's just as aggressive in teasing Senpai as Nagatoro is, much to the latter's frustration, but doesn't have romantic tendencies for him. 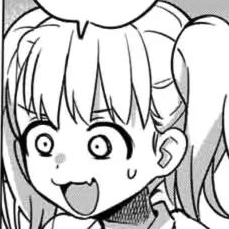 Somewhat of a sidekick within Nagatoro's clique, "Yoshi" frequently copies or repeats what her friends say and do. She tries to be social and being The Matchmaker for her friends, with mixed results.
Sakura 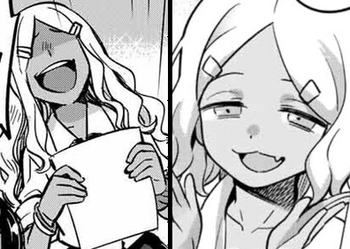 Hey~ Hey~ What are you playing? A game? Teach me how to play? XX-kun is so funny~ let's play together sometime~ (...) YY-kun, you're such a great teacher~ I'd love to get a lesson from you~
—Sakura, Ch. 32, sowing seeds of jealousy

Sakura is the least seen member of Nagatoro's clique, as she has an after school part-time job. Though first introduced in Chapter 1, she isn't seen after Chapter 2 until Chapter 27. Once discovering Senpai is the person the other girls had been teasing, she quickly joins in the mayhem. 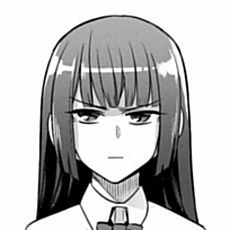 Good work. I've made some good memories thanks to you.
—Arts Club President, Ch. 37

The president of the Arts Club (referred to as "President" for short) and Senpai's upperclassman. As a third-year student, she's semi-retired from the club, as she still manages its bureaucracy and logistics.
Nagatoro's sister 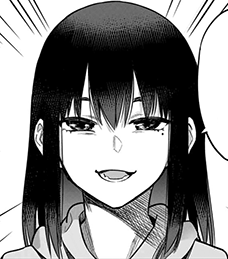 Every little detail about her... Aren't you interested?
—Nagatoro's sister, Ch. 59

Nagatoro's older sister. Senpai first meets her when he comes over to visit a sick Nagatoro.
Public Morals Committee Chair 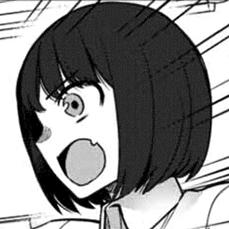 This is too immoral!
—Public Morals Committee Chair, Ch. 46

A short girl with a bob cut who heads the Public Morals Committee of the student council.
Ai Mashiro 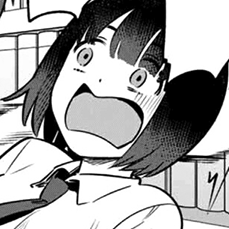 Secretary of the student council who is bullied by the Student Council President until she turns the tables on him.
Ichiro 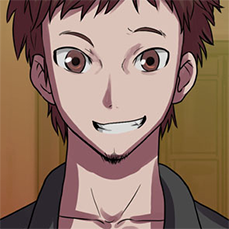 ...Am I interrupting something?
—Ichiro, Going Home with Nagatoro 2

A guy who Nagatoro claims is her real boyfriend to Senpai's despair in one of the early Pixiv sets. Actually her older brother.