Note that the other Rossum co-founder is on a different page for spoilery reasons.
Clyde Randolph

The inventor of the imprinting process and co-founder of Rossum. Original Recipe Clyde was betrayed by his business partner and became the attic's first occupant-victim. An imprint of him, modified to be unambitious and obedient, now runs things at Rossum.

Played By: Philip Casnoff, Enver Gjokaj & Nate Dushku
"You won't give up this body. That's fine, I won't resist. Right now I'm having this same conversation in ten other bodies in ten other Dollhouses around the country."

Face of the Rossum Corporation. 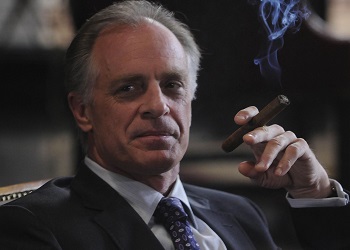 "Everyone likes to take a little something home from the office once in a while."
Played By: Keith Carradine & Noah Harpster

Adelle's direct superior in the Dollhouse.

Highly skilled neuro-chemist working for the Rossum Corporation. Knew Priya before she became a doll; when she refused his advances, he drugged her to make her appear psychotic and manipulated the Dollhouse into taking her on as a "humanitarian" case.

"It's easy to be attached to your assigned active. In fact it's necessary, but don't think of them as children; think of them as pets. When your child starts talking for the first time, you feel proud. When your dog does, you freak the hell out."
Played By: Reed Diamond

The Dollhouse's original head of security and DeWitt's number two. He takes his job very seriously but is contemptuous of the dolls themselves. Saves a special dislike for Echo, whose autonomy he considers a security risk. Revealed to be The Mole for the NSA, wiped and put in The Attic. 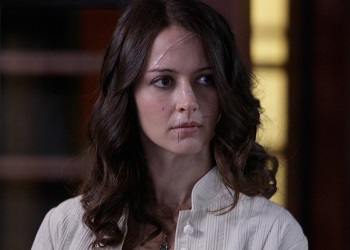 "My entire existence was constructed by a sociopath in a sweater vest; what do you suggest I do?"
Played By: Amy Acker

Chief medical officer at the Dollhouse, she was attacked by Alpha during his composite event and left with bad facial scarring. She is the Dollhouse employee with the most concern for the emotional well-being of the actives. Revealed to be Whiskey, a doll, implanted with a personality based partially off the previous (male) Dr. Saunders, who was killed by Alpha.

"My talents go beyond asking if he wants chocolate chip or oatmeal."
Played By: Liza Lapira

Topher's assistant in the imprint room. She thinks she's here to use her knowledge and technical skills to work the cutting-edge imprinting technology. Topher thinks she is here to bring him snacks. The male fans of Dollhouse think she's here because who doesn't love a cute Asian techie. Joss Whedon thinks she's here so she can become a suspect for the spy in "A Spy in the House of Love." 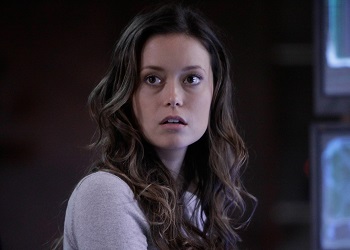 "Now's not the time for 'why.' I like this void. This evil, simple world. Just pain. Over and over again. No reason, no end, no in-between. You can't even pass out. We shut down everything that stands between you and blinding, searing pain."
Played By: Summer Glau

Topher's counterpart at the Dollhouse located in Washington, D.C. A former friend of Caroline, who was left to die by her in the pastnote okay, not really; Caroline had Bennett's best interests in mind—it's complicated, which has made her bitter - understandable since Caroline's abandonment left Bennett with a paralyzed left arm. Extremely shy and awkward, and has a huge geek-crush on Topher.