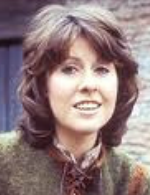 A journalist from South Croydon, who one fateful day while investigating missing UNIT scientists. found herself swept up with a madman with a box... and found herself imprinting herself on his hearts. And ours.

The most archetypal companion (many older fans grew up with her as their companion), and the longest-serving if you count by number of serialsnote Rather than by individual episodes, which would be Jamie, or calendar years, which would be Tegan. So popular that she got two spinoffs: the didn't-go-anywhere K-9 and Company pilot, and eventually the very successful Whoniverse tie-in spinoff The Sarah Jane Adventures (2007-2011), in which the Tenth and Eleventh Doctors also appear. Still the only classic series companion to show up in the new Doctor Who TV series played by the original actress.

Also known amongst the Fandom as the boss ass companion.

Prior to her reappearance on Doctor Who and later, The Sarah Jane Adventures, Big Finish gave Sarah Jane her own two season series in Sarah Jane Smith. Her return to TV in the revived series and her subsequent spin-off meant Big Finish could no longer use the character, but in 2020 it was announced that the part had been recast to Sladen's daughter Sadie, who will play the character for the first time in "Return of the Cybermen", an adaptation of the original version of what became "Revenge of the Cybermen" for the Lost Stories range.