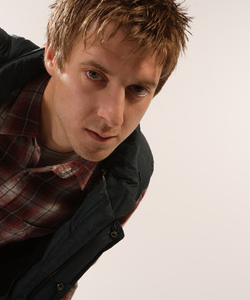 "Great! We're dead, again."
Debut: "The Eleventh Hour" (2010)
Joins TARDIS Crew: "The Vampires of Venice" (2010)
Departure Story: "The Angels Take Manhattan" (2012)
Played by: Arthur Darvill (2010–2012)
Young Rory played by: Ezekiel Wigglesworth (2011)
"Rory Pond is everything I could never be — brave enough to show when he's scared, man enough to take his wife's name, and so steadfastly in love that he'll wait 2,000 years and not complain once. Everyone needs a Rory in their life."
— Steven Moffat

Rory is a nurse, Amy's childhood friend, and now her husband. Growing up together with Amy, she used to make him dress up as her "raggedy Doctor", and he's appropriately freaked out to learn that the man actually exists. He starts off incredibly reluctant to travel with the Doctor, out of love for Amy and fear for his own life, but quickly rises to the challenge and becomes a tremendously courageous force to be reckoned with.