Characters appearing in the Doctor Who Magazine's various comics stories.

When Doctor Who Magazine (then Doctor Who Weekly) appeared, the Fourth Doctor appeared on television and in the feature comics. Subsequently, every major incarnation, from the First to the Thirteenth have had a turn at starring in the comics. 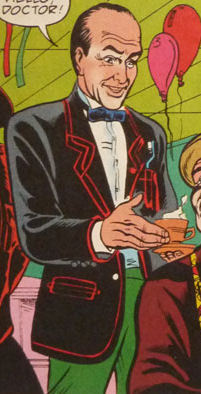 An incarnation of the Doctor "played by" Nicholas Briggs and based on Briggs' version of the character from his long-running fan series the Doctor Who Audio Visuals. He met the Seventh Doctor and Ace in a jokey standalone short called "Party Animals" written by Gary Russell, who had himself worked on the Audio Visuals. Later, the Eighth Doctor unexpectedly regenerated into him in a moment designed to screw with fans' heads. In reality the Doctor hadn't regenerated at all but had Shayde impersonate him.

A number of 1963-89 companions (most significantly Peri and Ace) as well as all of the regular post-2005 companions have also appeared in the strip, but are omitted here. 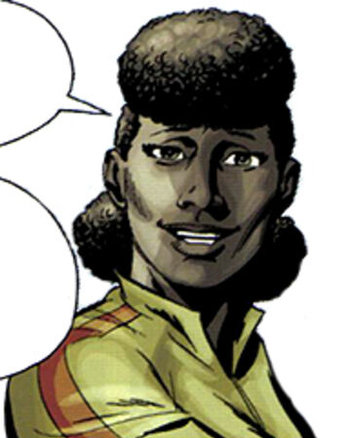 The first original companion to be created for Doctor Who Magazine. Sharon was a clever and fairly stoic teenager from Blackcastle, who got mixed up in an adventure involving Beep the Meep. Rather than calling the police, she much preferred to sort things out by herself. First non-white companion in any medium. 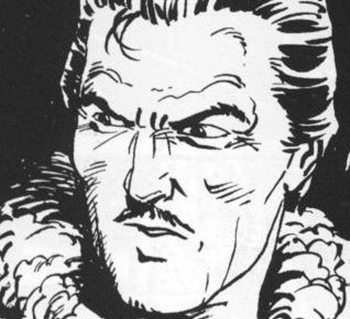 A tough, no-nonsense, but flexible US fighter pilot with a convoluted temporal background (he originally came from an alternate timeline created by the Monk, in which the Pacific part of WWII happened more or less in the same way but around twenty years later), who joined the Fifth Doctor as his only regular companion in the comic. 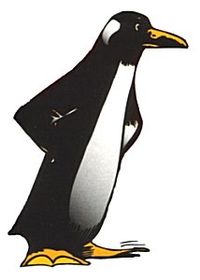 A shapeshifter who prefers to take the form of a penguin. Has a daytime job as a private eye. Appears outside of Doctor Who Magazine in the "Prisoners Of Time" IDW comic miniseries, in the Past Doctor Adventures novel "Mission: Impractical", and in Colin Baker's Marvel graphic novel "The Age Of Chaos". Also appears in the Big Finish Doctor Who audios, where he's voiced by Robert Jezek. Not to be confused with the Peter Capaldi character from Torchwood: Children of Earth, although the coincidence in name did spawn some Epileptic Trees theorizing.
Advertisement:
Izzy 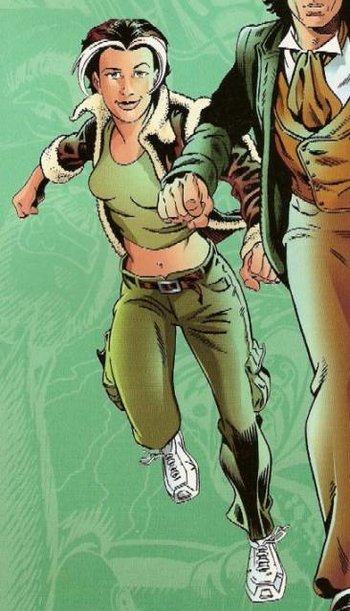 A happy young "fan-geekoid" from Stockbridge, who's working as an UFO hunter together with Maxwell. Joins the Eighth Doctor on his travels, and in the process comes to terms with the reality of all of time and space, with having been adopted, and with being gay. Also appeared in a Big Finish Doctor Who audio, voiced by Jemima Rooper.

A kind of on- and off-again companion to the Eighth Doctor, whom he had allied with previously. A secret agent for the British Crown in the 1930s and 40s. Fey's a textbook Action Girl — she punches Time Lords in the face. (Later, arguably an actual superhero.)

A friendly, silly, heroic adventurer who happened to have been Cyberconverted somewhere along the line. He spontaneously regained the capacity to experience emotion, but not his memories of his previous life. Originally introduced in solo back-up strips in the eighties, in which he wandered the universe trying to do good despite everybody's terror of him. Later reintroduced during the Eighth Doctor comics, much older and more experienced, in which he became a full-scale companion and a major player in one of the comics' arcs. (No connection to the tellurium-themed bad guys.) 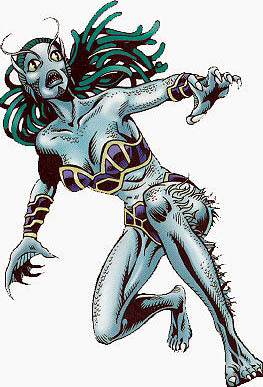 The Eighth Doctor's final Doctor Who Magazine companion, an alien who escaped her hellhole homeworld to see the universe. She turns out to be very mentally unstable and has a whole lot to learn about morality. Got hit by an Aborted Arc courtesy of the TV series's return, and finally got her happy ending in 2016. 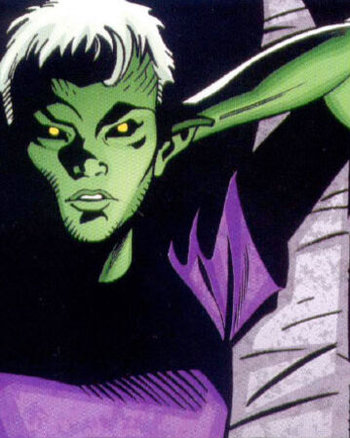 When they were told that the 2009 Doctor Who TV specials would not feature any ongoing regular companion, the strip's creators decided to revive the DWM tradition of original companions for Ten's final arc. Originally introduced as a minor villain, "Madge" later joined up with the Doctor against his will, since she blames him for her amnesia and expects a cure. 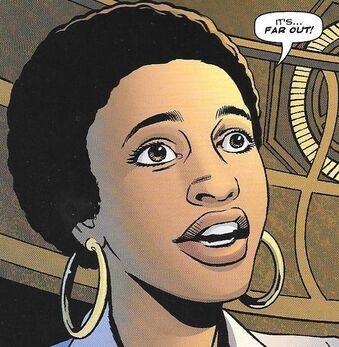 Like Majenta before her, Jess was originally introduced as a supporting character before getting upgraded to a bigger position, in her case thanks to the one-year gap with no regular companion between series 9 and 10. After the Twelfth Doctor finds himself stranded in 1970s London while the TARDIS recuperates following their latest adventure, Jess and her family take him in... only to find themselves drawn into the weirdness lurking under London's surface. 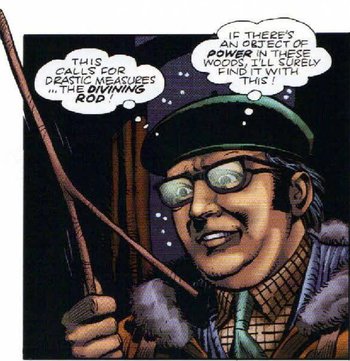 The local nerd in the English country village of Stockbridge, the DWM comics' standard location for when something's weird going down in a bucolic setting. Has repeatedly turned down the idea of travelling with the Doctor because he claims to be too cowardly, although he's shown significant courage when pushed. Introduced Izzy to the Doctor and has some mild, vague psychic abilities. Has also appeared in one Big Finish Doctor Who story, "The Eternal Summer", where he was voiced by Mark Williams. 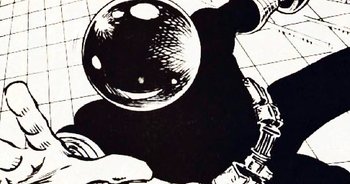 A creation of the Matrix Lords of Gallifrey, those Time Lords whose minds survive in the Matrix, serving as their agent in the wider universe. A sometime ally of the Fifth and Eighth Doctors, who through his adventures with them discovers he's slowly developing free will. Appears in the Big Finish Doctor Who audios, where he's voiced by Mark Donovan. 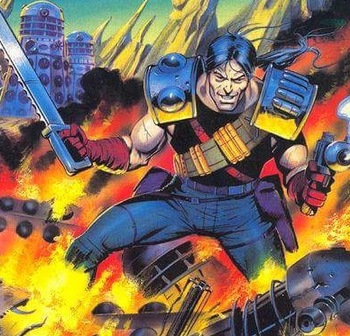 Abslom Daak was a thuggish Human criminal from the mid-26th century. Eventually he was convicted and given the choice between vaporisation or exile as a Dalek Killer. He chose the latter. During this, his only true love was killed by a Dalek survivor that Daak had overlooked, leaving Daak grief-stricken and vowing to exterminate every Dalek in the galaxy. Made his first appearance in a back-up comic strip in 1980. He met the Fourth and Seventh Doctors and also Bernice Summerfield a couple of times (he lived during the same 26th century time period as her). He made a comeback in Year Two of the Eleventh Doctor Doctor Who (Titan) comics, in which he became a full companion, and perhaps most surprisingly, appeared on the series, in a montage of previous bank robbers in "Time Heist". 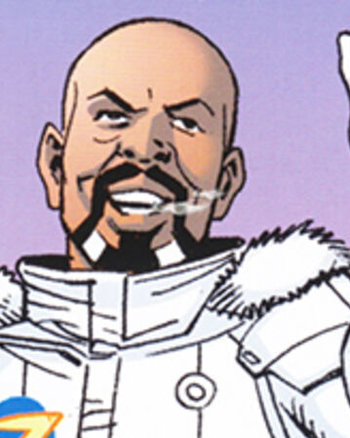 A futuristic "quadrillionaire" who uses his wealth to explore the wilder reaches of the solar system. A couple of times the Doctor has had to save his backside after he stumbled across Sealed Evil in a Can in the process. 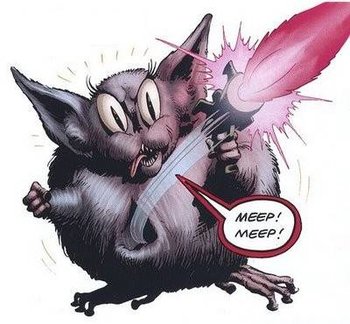 An adorably cute alien fluffball who is actually a murderously psychotic Galactic Conqueror. Introduced in the Fourth Doctor comic story "The Star Beast", a parody of cute Alien Among Us narratives in which he crashed on contemporary Earth while fleeing justice and tried to pull a Wounded Gazelle Gambit. Made several later appearances as a comedy villain. Also appeared in two Big Finish Doctor Who dramas, "The Ratings War", in which he was voiced by Toby Longworth, and their full-cast adaptation of "The Star Beast". 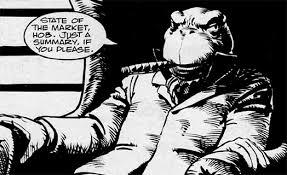 The froglike CEO of Intra-Venus Inc. who wanted to possess the TARDIS, and regularly hired mercenaries to pursue the Fifth and Sixth Doctors. Also appeared in a Death's Head crossover, where he hired the eponymous Freelance Peacekeeping Agent (and definitely not a mercenary) to pursue the Seventh Doctor. Appeared in the Big Finish audios "The Maltese Penguin" and "The Quantum Possibility Engine", voiced by Toby Longworth. 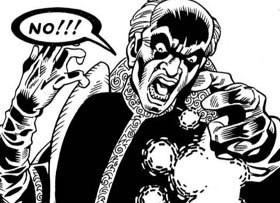 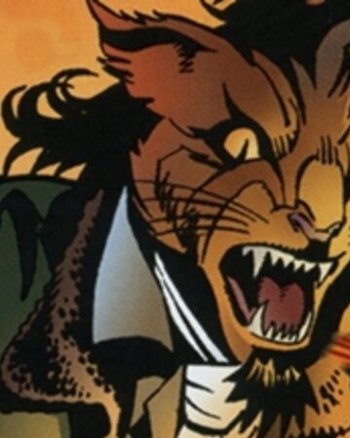 Destrii's foppish, devious uncle and the only member of the family she actually likes. Looks like a humanised lion. When he's introduced, he seems sympathetically roguish, but later developments reveal just how evil he can be. 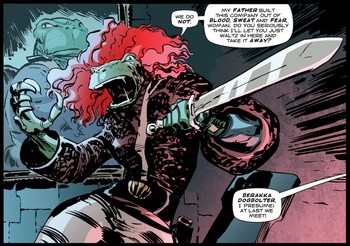 Josiah's daughter and a chip off the old block. Originally appeared in "The Stockbridge Showdown" as her father's loyal assistant, who was given a second chance when he was arrested. She did not rethink her life based on this, and resurfaced in the first Thirteenth Doctor comics story "The Warmonger", running a telepathic media channel called the Freedom Thoughtcasting Network.