In General
You play as a Sourcerer on the run from both the Voidwoken and the Divine Order. Shipped to Fort Joy for being a Sourcerer, you must now escape your imprisonment. As you continue to survive, you begin to learn more about yourself, the people traveling with you, and your mysterious powers, and soon you realize that you may be playing a bigger part in Rivellon's history than you thought.

You can create a custom character, or you can select one of the six Origin Characters to set as your avatar. The Origin Characters you didn't select may be recruited as companions. Up to three others may join your party. 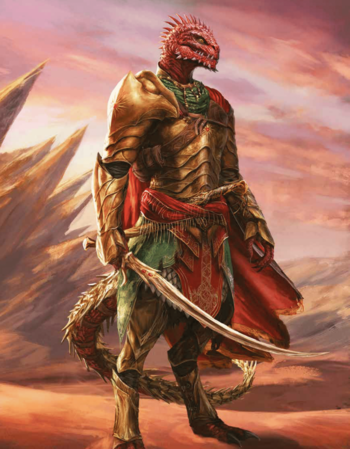 "Famed, of course, for my unique red skin and unparalleled skills as a general of the House of War, I, the Red Prince, was raised within the vast palaces of the fabled Forbidden City. I was destined to become the next emperor, but my ambitions suffered a bit of a setback when I fell from grace for cavorting with demons. Now I'm exiled and hunted by assassins, but I assure you: I remain undaunted — and as determined as ever to claim my rightful throne!"

A war general destined to become the next emperor of the Ancient Empire. He was then exiled from his homeland for mingling with demons. 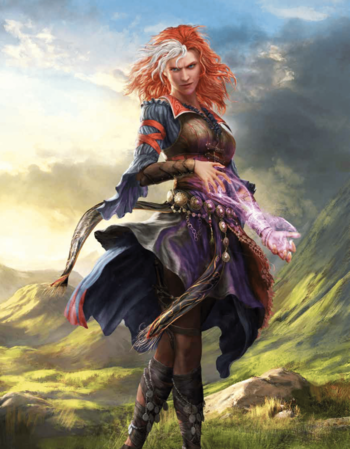 "All my life I've been a performer, a musician; beloved and celebrated by all. But I have a secret: I'm also a playground for sprites and spirits and... worse. The voice that rings inside me now is darker than any that came before. Almost caused a bunch of my fans to rip each other to pieces... But you can trust me: I've got this under control. Step one: Find out who — or what — is trying to take control of my mind. Step two: Make it sorry it ever tried."

A famous bard who is trying to get rid of a mysterious force that seeks to control her mind.

Her origin story can be viewed here 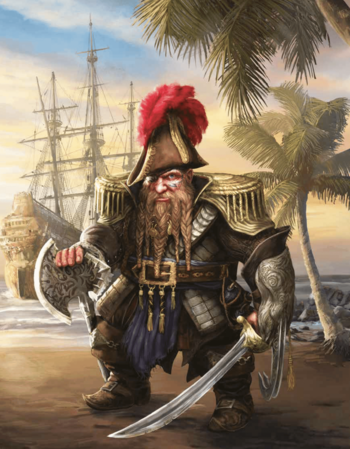 "I was just thinking about someone I used to know. My cousin. The queen, in fact. A tyrant. I tried to stop her, but — things don't always go according to plan. She cast me out to a forgotten island, and me short work of my allies, too. Lucky for me, I was able to commandeer a ship, and began a new life for myself, out on the high seas. But I hear the Queen is at it again — and there's something darker behind her madcap schemes this time. If I don't stop her, I don't know who will."

A dwarven bastard prince who was exiled to a remote island for inciting a rebellion. He survived, but the wilderness changed him. 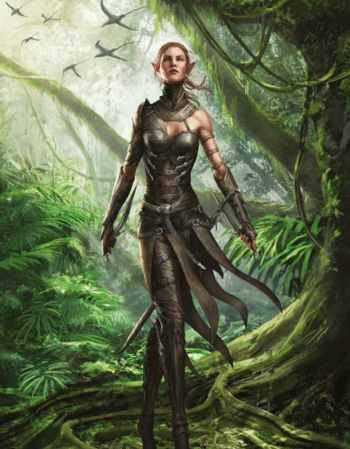 "I used to be a slave, kept under the thumb of the Master; the bastard that made me hunt down my own kin. How did he do that, you ask? With the living scar you see on my cheek, this horror that takes no more than a song sung by Master dearest to control my very thoughts. But now the tables have turned. I broke my shackles. And when I finally find him, I will make the Master sing a very different kind of song..."

An elven slave who broke free from her magical bondage and now seeks revenge on her former Master.

Her origin story can be viewed here 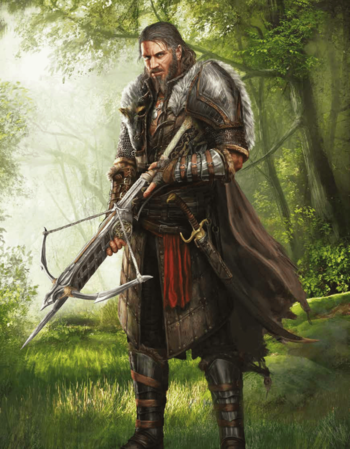 "Once, I was a crusader for the Divine Order. I pledged my life to Lucian the Divine. But the war changed everything. He sent me to save the elves I grew up amongst. I arrived too late. Lucian ordered the use of Deathfog against the Black Ring, annihilating everyone I once knew in the process. Now, I'm a mercenary killer, one of the infamous Lone Wolves. And my next target is none other than Lucian's own son..."

A member of the infamous mercenary band known as the Lone Wolves, and, before that, a soldier in the Divine Order. 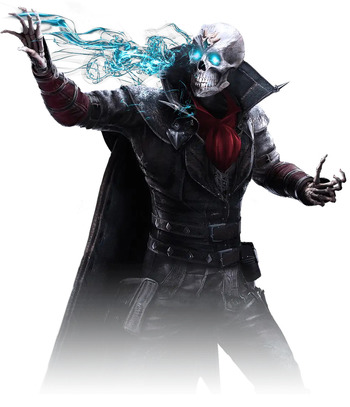 "Oh, don't stare. How would you look after aeons in some ghastly crypt? But your people are rather prone to death. Mine are not. Yet when I emerged from my completely unjustified imprisonment, I found them gone, our culture forgotten, any trace of the world I knew all but obliterated. I must even hide my true face beneath an ever-shifting mask for fear you savages will attack me! That is how I wander this strange world, trying to uncover the truth about a history you primitive people never knew existed."

A recently awoken undead who in life belonged to a long-dead civilization from Rivellon's ancient past. Due to his ghastly appearance, he must wear "masks" made from the faces of his victims in order to walk peacefully among the living.

A Magister ship, made of wood that holds an elven spirit.
Almira and Mihaly

A succubus who needs help escaping from the Black Ring.

A former magister who has become Almira's lover.
Gareth

The leader of the Seekers.

A young Sourcerer working with the Seekers.
Jahan

A traveling wizard and demon hunter. See Divinity: Original Sin for his tropes in that game.
Lora and Quercus 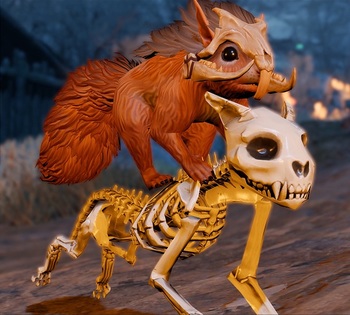 A "mini-companion" added upon the release of the Definitive Edition. A talking squirrel upon an undead cat mount, Lora is a former member of the Knights of Drey, an apocalyptic order of woodland creatures that worship the Great Acorn. 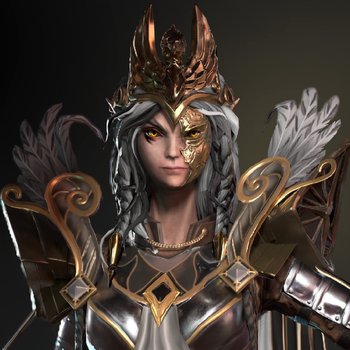 A powerful Sourcerer who was captured and held prisoner on the Lady Vengeance by Dallis.

A powerful necromancer and inventor who Dallis captured to do her bidding on the Lady Vengeance.

The founder of the Seekers, she's a Master of the Source and old friend of Malady.
Sadha

The Voidwoken and the God King, formerly known as the Eternals 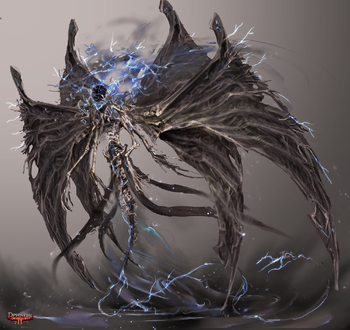 A primordial evil attracted to Source magic like moths to a flame. They are the Eternals, Fane's lost race that he is searching for throughout the game. They were banished to the Void by the Seven Gods in a bid for power, and now they want to escape the Void and return to Rivellon, destroying and/or enslaving the current populace in the process. They are led by their former king, known as the God King.

The Divine, thought to be dead for most of the game. See Divine Divinity for more details. 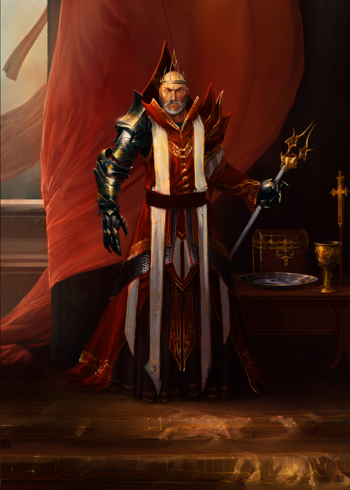 "I do not deal in hope. If you are to survive in this world, you must only be certain. Hope will kill you. Even if you don't know it yet." 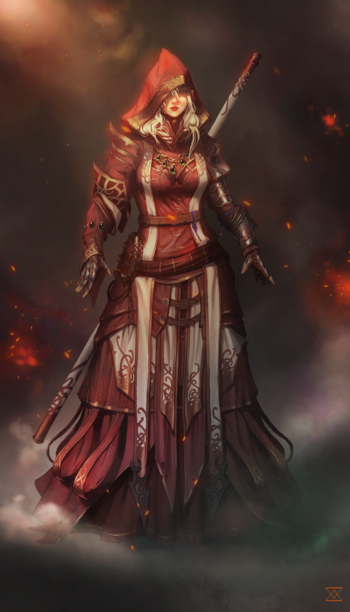 "Evil? Yes - I suppose he is. I imagine you think the same of me. Go on, call me what you like. I'm not afraid to be the villain to your supposed 'hero'. I'm not nice. I'm just right."

Bishop Alexandar's right-hand woman. She is later revealed to be Fane's daughter.

The hooded man who appears at Dallis' side throughout the game. Magisters and Paladins alike refer to Vredeman as Dallis' master, but on screen he appears to be her lackey. Or at least, so he seems. In reality, he is Braccus Rex, a powerful Sourcerer known as the Source King from thousands of years ago. See Divinity: Original Sin for that identity's tropes.
Magister Reimond

The leader of the White Magisters, Dallis' second in command, and first seen doing operations in Reaper's Coast.

An elderly female Sourcerer who serves as the principle narrator of the story.
Roost

Ifan's contact with the Lone Wolves, and the man who knows where Sebille's master is.
The Sallow Man

An agent of the Black Ring.
The Shadow Prince

Sebille's former Master who controlled her for most of her life. Also has some concerns about Sadha and the Red Prince.
The Doctor

The demon that speaks to Lohse. Can also make a pact with the other main characters, in exchange for their powers of divinity.

A demon with lizard appearance who represents the Doctor on Bloodmoon Island.

Nurses Do, Re, and Mi

The Doctor's assistants in his clinic in Arx.
Justinia

Beast's cousin and queen of the dwarves. According to Beast, she is a cruel, despotic tyrant, and it was his attempt to rally a rebellion against her that got him exiled.
Isbeil

Kemm is the grandmaster of the paladin order, and was trusted and respected by both Arhu and Lucian.
Mordus

Mordus was once Lohar's right-hand man, before he made a Deal with the Devil for more power. He intends to assist Queen Justinia in Operation Downfall.

The Magister in charge of transporting Sourcerers to Fort Joy.

A Magister investigating a murder aboard the ship.

A trio of child Sourcerers.

An elf encountered near the gates of Fort Joy, who is being harrassed by Griff's lackeys. The focus of the quest "The Shakedown."

A man driven mad. The focus of the quest "The Murderous Gheist."

A lizard Dreamer who has some connection to Sebille's master.

An elven Dreamwalker who's gotten on Griff's bad side.

The leader of a gang, and the man in charge of the kitchen.

One of Griff's lackeys.

One of Griff's lackeys, who the player can woo.

The one in charge of Fort Joy's Arena of the One.

The promoter of the Arena of the One.

A human and a lizard, arguing about the former's late wife.

A mother who has lost her daughter Erma. The focus of the quest "Every Mother's Nightmare."

A paladin investigating Reaper's Isle and Fort Joy. He soon runs into trouble with the Magisters.

An undead merchant outside the Fort who is one of Ifan's contacts for his contract.

A wizard who was turned into a flaming pig by Braccus Rex.

A masked priestess who seeks Soul Jars for her goddess Amadia.

An undead whose soul is bound to Braccus Rex's vault.

A prisoner in the dungeons beneath Fort Joy. Thought to be a Godwoken, he was tortured to insanity before he could unite with Gareth's forces.

A pair of Source Hounds. Focus of the quest "Finding Emmie."

A human prisoner. The focus of the quest "The Teleporter."

A dwarven bard with some history with Lohse and Beast.

An elven prisoner who is aware of Ifan's history.

A lizard dragon knight locked into dragon form and bound in the Hollow Marshes by Radeka.

A witch who cultivates blood roses.
The Lady Vengeance

An undead cat.
The Reaper's Coast

A dwarven pickpocket and Butter's girlfriend.

The dwarven leader of the (both literal and figurative) underground criminal empire in Driftwood. Lohar is at the center of the quests "The Law of the Order" and "The Shadow Over Driftwood."

The leader of the Paladin forces in Reaper's Coast. Assigns the heroes the quest "Dark Dealings in the Blackpits" to get intel on the renegade Magisters.

Gareth's former friend, now turned hostile as a result of them going their separate ways.

The reclusive master & manager of the Stonegarden, a large cemetery near Driftwood. An eccentric who lives with his many pets. Or at least that’s what he likes people to believe. In reality Ryker is a Lone Wolf and one of the most dangerous Sourcerers alive, to the point the divine order has spared him out of fear. He uses the endless corpses and Source he receives through people burying their loved ones to perform unspeakable experiments in the name of source mastery.
Arx

An old foe of the Source Hunters, brought back in the Definitive Edition as a Bonus Boss.