A list of characters that are hostile to the Ducks found in Disney's Disney Ducks Comic Universe. 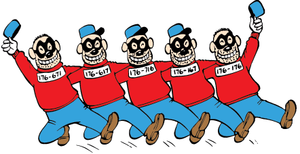 The Beagle Boys are a family of masked and usually not-too-bright thugs that unsuccessfully seek to rob Scrooge of his fortune. 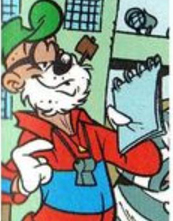 A sorceress who seeks to steal Scrooge's #1 dime and melt it in the fires of Mt. Vesuvius for a spell that could give her the power to turn any substance into gold. 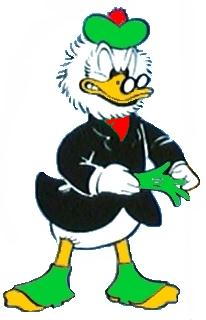 The second richest duck in the world, Flintheart Glomgold, just like Scrooge is a cheap old miser who lives in a bin full of money, except in South Africa; and just like Scrooge, Flintheart started his fortune from nothing. Flintheart, however, has none of Scrooge's integrity and didn't make his fortune square, and he is gleefully willing to cheat, lie, steal, and worse as the means to an end. Flintheart seeks to gain the status of the richest duck in the world, and unlike Scrooge, doesn't have much morality to slow him down.

A notorious, Duckburg-based business rival of Scrooge's. He presumably holds the dubious honour of being the third richest duck in the world, or depending on the story, the second richest. John D. Rockerduck was created and used by Carl Barks in just one story, "Boat Buster", but for some bizarre reason, Brazilian and European writers almost always use him in Flintheart Glomgold's place and rarely acknowledge Flintheart's existence. Unlike Scrooge (and Glomgold), Rockerduck has no qualms about spending money if it suits himnote However, he is in no way a squanderer, just someone who understands when you have to spend money to make money. (which in some ways makes him somewhat more sensible than Scrooge), and he inherited his wealth from his hard working father, former gold prospector Howard Rockerduck who struck it rich in the 1848 gold rush, rather than earning it himself. 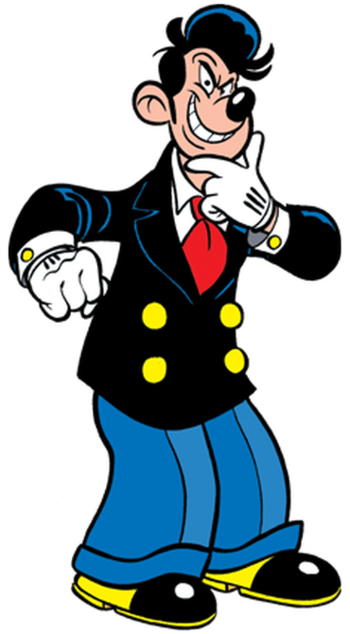 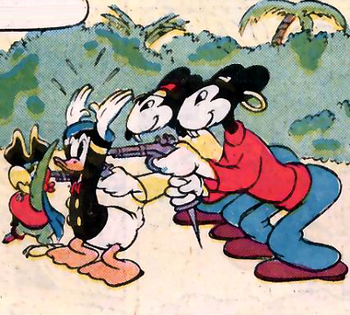 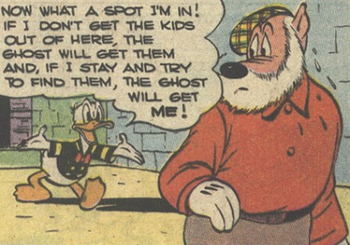 A jewel thief with a remarkable likeness to Scottie McTerrier, the caretaker of McDuck Castle.

Madame X, Madame XX, and Baron Guffaw are a trio of smugglers Donald encountered as a member of the coast patrol. 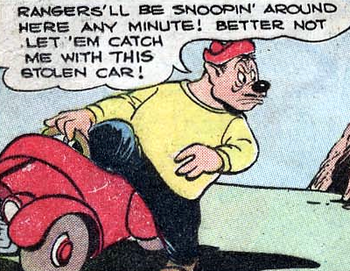 A crook who prefers the outdoors but refuses to give up on luxury.

A pig-featured, mustachioed con man usually wearing a hat and a black coat. Created by Barks, he's appeared under many different names such as "Scalpnik" and "Porkman de Lardo".

First appearance: "Hound of the Whiskervilles", 1960

The centuries-long rivals of the McDucks, the Whiskervilles have been after their rival's land just as long, and to that end, created the myth of the spectral hound that drove the McDucks from their ancestral castle in the 17th century. The hound was in reality nothing but a costume, and the Whiskerville's have kept the charade up all the way to the days of Scrooge himself. They have been biding their time for the day when the McDucks finally can no longer pay the taxes on their land, which would let them swoop in and take it for a pittance. Created and used only once by Carl Barks, but became more major antagonists in Don Rosa's Life and Times of Scrooge McDuck. 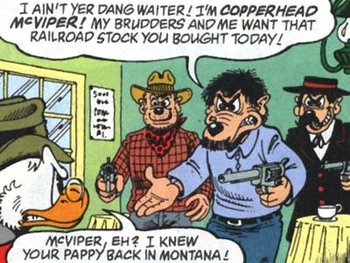 A trio of brothers who terrorized Goldopolis, Nevada in its heydays. Only Copperhead is still alive.

A slimy loanshark and crimeboss, and Scrooge's greatest rival in his youth. He first appears in the Carl Barks story North of The Yukon, trying to scam Scrooge out of his fortune with the I.O.U that Scrooge signed for a loan in 1898, and appears several more times, usually in flashbacks to the gold rush days, but also as the villain of Back To Klondike by Don Rosa. 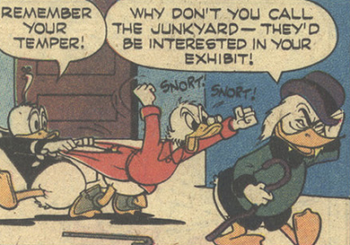 A billionaire who is in competition with Scrooge McDuck. He is not to be confused with the Gotrocks that got introduced in 1967. 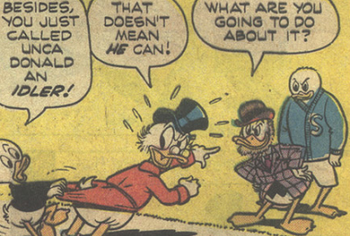 First appearance: "The Goat With the Long Silky Hair", 1967

A billionaire who is in competition with Scrooge McDuck and has a nephew named Stoneheart. He is not to be confused with the Gotrocks that got introduced in 1966. 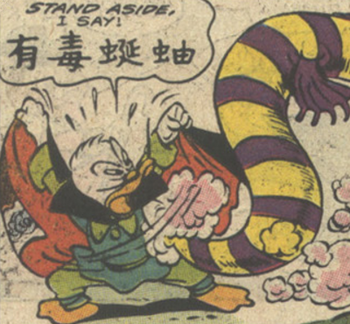 A Chinese wizard with the power of illusion. He was inspired by Magica to go after the Number One Dime. 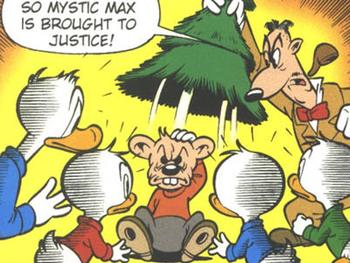 A high-level Brutopian spy who can convincingly disguise himself as whomever he wants.

A gentleman and playboy of the French riviera, living a double life as Le Chevalier Noir (the Black Knight), the greatest cat burglar in the world. As he seeks to rob Scrooge of his fortune as a cap to his career, he becomes considerably more dangerous after stealing a flask of the "Universal Solvent" created by Gyro and fashioning it into a suit of armor that dissolves everything that stands in his way. Created and mostly exclusively used by Don Rosa. 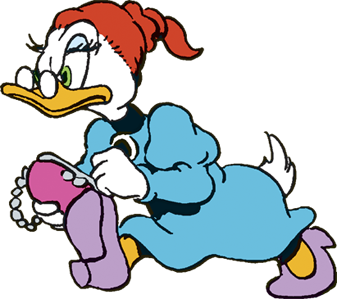 A business rival of Scrooge with a mean disposition. She's more than willing to use underhanded tactics to get her way but prefers a more direct approach. 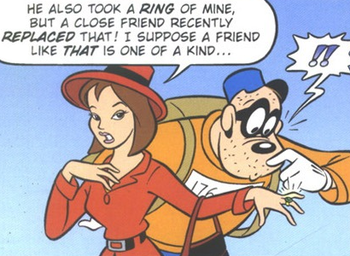 A crook with expertise in manipulation. She took the loot from the Beagle Boys after they robbed a bank she was planning to rob.

Debut: The Fabulous Philosopher's Stone (Maurice) & The Crown of the Crusader Kings (Molay), 2001

Two agents from The International Money Council who became Scrooge's rival in search of certain treasures in 3 separate stories. Despite Molay being the senior of the 2, Maurice was introduced first. However, their history was deeper than anyone could guess at first... 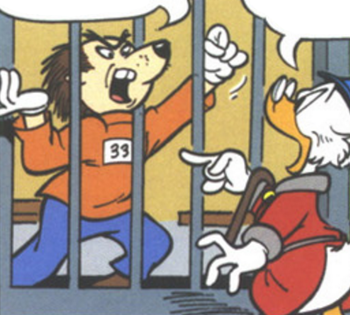 A disguise specialist who is after Scrooge's money and valuables. 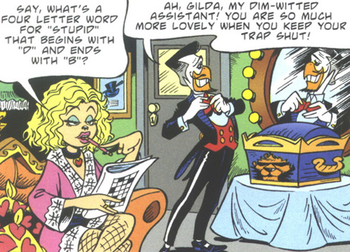 Zoma is a stage magician who wants to be a true magician and is therefore also after the Number One Dime to create the Midas Touch. His assistant is Gilda, a woman with more beauty than brains but a good dose of common sense. 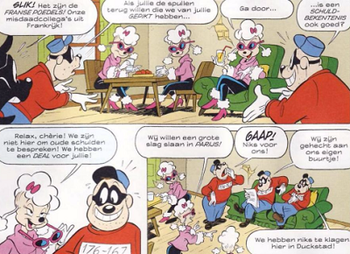 A trio of poodles (yet to be given an official English name) active in France, specifically Paris. They are acquaintances of the Beagle Boys. 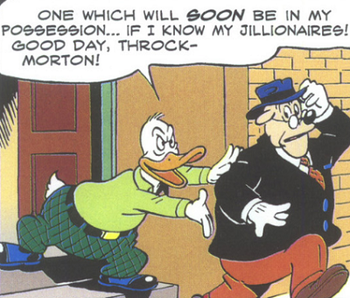 A collector of coins that in some way are the first. He wants the Number One Dime as centrepiece of his collection. 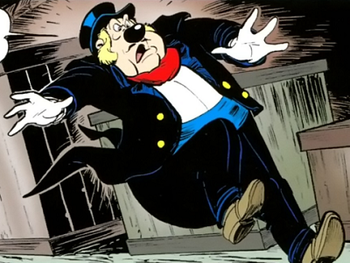 The landlord of the Strathbungo House Girls' Orphanage who secretly also is its owner, Mr. Jolly. 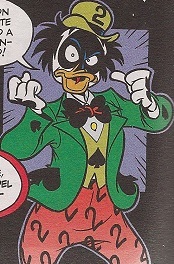 A greedy opportunist who claims descendancy from a viking explorer named Olaf The Blue, allegedly the first european explorer to reach North America, which Azure belives makes him the rightful owner of the entire continent.

A corrupt, sleazy lawyer who first appears working for Azure Blue in The Golden Helmet, handling his claim of ownership over North America. 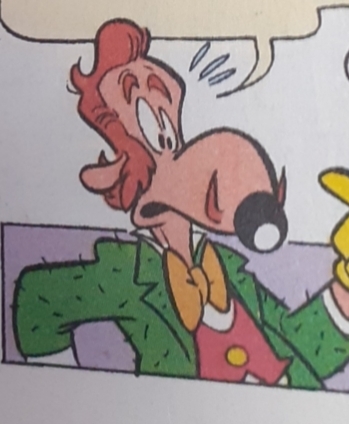 An attorney with a strong jealousy towards Duck Avenger. He later reappears as the Beagle Boys' counsel. 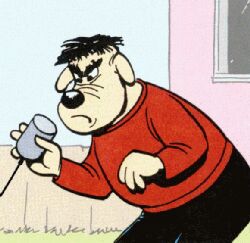 Donald's next door neighbor. He and Donald have a heated rivalry that comes close to being a full-fledged war, with the yard between their houses as the battlefield.

The Queen of the Wild Dog Pack

The Queen of the Wild Dog Pack 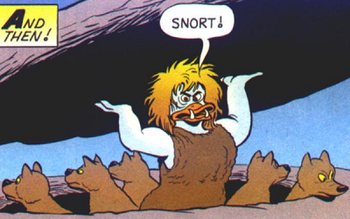 A woman who was lost as a child and raised by kangaroos. As an adult, she's the leader of a pack of dingoes and commands at least one kangaroo too. Scrooge came after her when her pack targeted the sheep on his stations. 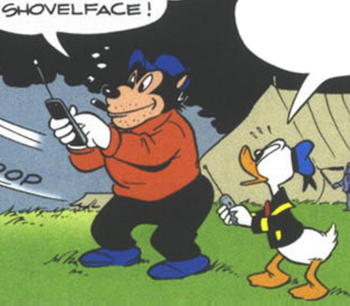 One of Donald's rivals and the boyfriend of Teensy Whiffle. 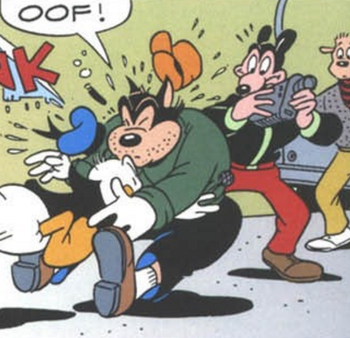