Rincewind and the Wizards series

Ymper Trymon
Villain of The Light Fantastic and the first proper Discworld Big Bad. He is one of the wizards of Unseen University.
Advertisement:
Ipslore the Red
Villain of Sourcery. A former wizard from Unseen University who decided to use his Sourceror son to destroy the University, but then went even further overboard.
Lord Hong
The Big Bad of Interesting Times. He is the Grand Vizier of the Agatean Empire.
Andy Shank and the Ankh-Morpork United football team

The football team that forms to rival the Unseen Academicals in the "new football". Their members include Andy Shank. who is described in more detail down below.

The closest thing to a main Big Bad for Unseen Academicals, Andy Shank is a thug and football hooligan who leads plays against the Unseen University team.
Advertisement:

Leonal Felmet and Lady Felmet
Dual antagonists of Wyrd Sisters. They killed King Verence of Lancre and usurped the throne.
Lilith Weatherwax
A fairy-godmother and villain of Witches Abroad. She's Esme's older sister.
The Elf Queen
Big Bad of Lords and Ladies, The Wee Free Men and the second The Science of Discworld book, and also an important player in The Shepherd's Crown, she invaded Lancre when the walls between the universes weakened, and Roundworld when the wizards weren't paying attention. In her spare time she kidnaps human children.
Salzella
The Big Bad of Maskerade. He works at the Opera House.
Advertisement:
The Magpyrs
A family of vampires who are the villains of Carpe Jugulum. They consist of the Count de Magpyr, the Countess, and their adult children, Vlad and Lacrimosa, as well as the (currently deceased) Old Count.
The Wintersmith
The antagonist of Wintersmith, a god who falls in love with Tiffany Aching when she accidentally interrupts the dance symbolising the seasons.
The Cunning Man
The antagonist of I Shall Wear Midnight, the Cunning Man is a witchfinder who becomes a spirit of pure hatred and continues his work around the Disc, targeting witches every few decades and seeking to wipe witchcraft out.

The Duke of Sto Helit
An antagonist in Mort (though not the antagonist). The Duke is the Evil Uncle of Princess Keli, who aims to kill her and take over the Kingdom.
The New Death
The secondary antagonist in Reaper Man, the New Death is the replacement sent to kill "Old" Death by the Auditors of Reality and take his place.
The Music
The primary antagonist in Soul Music, the Music chooses Imp y Celyn, a wannabe musician from Llamedos, to become the Disc's first rockstar... at a price.
Mr Clete
A secondary antagonist in Soul Music, Mr Clete is the Secretary of the Musicians Guild and constantly making efforts to kill the Band with Rocks In.
Jonathan Teatime 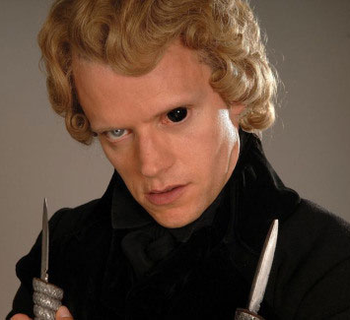 The villain of Hogfather, is the personification of terrifying or just plain badass. He's one of the Assassins' Guild scholarship boys, taken in because both his parents died when he was young and they felt sorry for him. As Lord Downey put it, "Perhaps we should have wondered a bit more about that."

Lupine Wonse
The leader of The Elucidated Brethren of the Ebon Night and an antagonist of Guards! Guards!. His society planned to use a dragon for their attempt to take over Ankh-Morpork.
The Elucidated Brethren of the Ebon Night
The various people assembled by Lupine Wonse for his secret society to overthrow Lord Vetinari. Their ranks were filled by those who were so far down the Ankh-Morpork food chain that even Vetinari's network of spies failed to take notice.
The Noble Dragon
The other main antagonist of Guards! Guards!. A dragon summoned by the Brethren as part of their scheme.
Edward d'Eath
The Big Bad of Men at Arms. Edward is an Impoverished Patrician who, having fallen on hard times, decides that it is time the Rightful King Returns.
Dragon King of Arms
The Big Bad of Feet of Clay. He is a vampire who works as the Ankh Morpork's herald, tracing genealogies and making coat of arms.
Prince Cadram
The Big Bad of Jingo. He is the head of Klatch, who seeks to unify the country by starting a war against Ankh-Morpork.
Wolfgang Von Uberwald
One of the two villains of The Fifth Elephant, Wolfgang served as the more obvious of the two Big Bads. He is a dangerous werewolf, and Angua's brother.
Dee
The other of the two villains in The Fifth Elephant. Dee is the Ideas Taster for the Low King.
Carcer Dun
The Big Bad of Night Watch, he's a Serial Killer being pursued by Vimes.
Captain Findthee Swing
The Captain of the Cable Street Particulars or the "Unmentionables", Swing comes into conflict with Vimes-as-Keel throughout Night Watch.
Lord Snapcase
The Patrician before Vetinari, replacing Homicidal Lord Winder. Didn't prove to be much better than his predecessor, ruling the city until everyone got fed up of him, and hung him up by his figgin. Only appears in Night Watch
Grag Ardent
An extremist Dwarven grag, or wise-man, who is the Big Bad of Thud! and Raising Steam.
Goblin Smuggling Conspiracy - Unmarked Spoilers
A conspiracy that serve as the main antagonists in Snuff.

The son of Lord Ronald Rust and head of the conspiracy.

Local magistrates who act as the de facto lawmakers in the region despite not having any actual legal standing.

The Dragon to Gravid Rust.

The New Firm
A pair of crooks consisting of Mr. Pin and Mr. Tulip. They were hired to discredit Vetinari in The Truth in a plot to overthrow him.
Lord de Worde
The mastermind of the plot to overthrow Vetinari in The Truth.
Reacher Gilt
Big Bad of Going Postal. Gilt is the new head of the Grand Trunk, the company that runs the Clacks.
Mr Gryle
The Dragon to Reacher Gilt in Going Postal, Gryle is a wild banshee and Gilt's head assassin.
Cosmo Lavish
The main antagonist of Moist von Lipwig during Making Money.

Villains from other books (one-shots)

Dios
Big Bad of Pyramids. Dios is a High Priest among High Priests in Djeylibeybi.
Vorbis
Villain of Small Gods, Vorbis is head of the Exquisitioners of the Omnian Church.