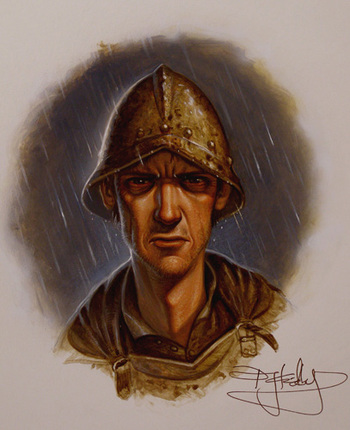 Vimes: The trouble is, you know, that once the taste's got you it never lets go.
Carrot: But you've been very good, sir. I've not seen you touch a drop for -
Vimes: Oh, that. I was talking about policing, not alcohol. There’s lots of people will help you with the alcohol business, but there's no one out there arranging little meetings where you can stand up and say, "My name is Sam Vimes and I'm a really suspicious bastard."

Head of the Ankh-Morpork City Watch, and a hardened copper to the bone. He was promoted to captain of the Night Watch during the rise of the Guilds and the decline of the Watch, and this combined with his natural cynicism drove him to drink. However, after stumbling into saving the city, he unexpectedly found himself moving up in the world, starting with his marriage to the wealthy socialite and swamp-dragon fancier Sybil Ramkin and culminating with receiving two titles: a knighthood as the Commander of the revitalized City Watch and the Dukedom of Ankh in Jingo in recognition of his accomplishments. He is also a truly incredible badass. 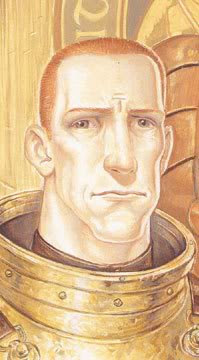 A tall, strong, and somewhat naive young man who came to Ankh-Morpork looking to have a man made of him (in more ways than one: Carrot had been raised by dwarfs all his life). He signed up with the Night Watch, and was largely responsible for pulling the organization to its feet and making it what it is today. Despite all evidence to the contrary (such as his incredible charisma, his crown-shaped birthmark, and his old but very well-made sword), he will do everything possible without actually lying to indicate he is not secretly the last long-lost heir to the throne of Ankh-Morpork. Currently Carrot holds the rank of Captain of the Watch, which makes him Commander Vimes's second-in-command.

A female Watch officer, Love Interest for Carrot, and resident werewolf. Probably one of the most formidable Watch members and her werewolf skills make her very useful, but she has to deal with an entire city getting Genre Savvy about werewolf abilities. Like Vimes, she is constantly battling with her dark side (or technically, battling between the dichotomy of her two states of being), making her tough and absolutely terrifying when she loses her temper.

The first vampire constable, debuted in Thud! She and Angua don't get along very well at all, but wind up having a grudging friendship. Vimes has a pathological distrust of vampires, but he is able to suppress this in light of her utility.

A former Obstructive Bureaucrat hired by Vetinari to examine Vimes's operations in Thud! Despite his aggravating nature, he's secretly a City Watch Fan Boy, and Vimes unwittingly gives Pessimal his dream by making him an acting constable (erroneously believing that seeing real police work up close would get him to shut up and go away). This merely inspired Pessimal to Take a Level in Badass, and become a Crazy Awesome Ascended Fanboy, committing an act of bravery (attacking a rioting troll with his teeth) so insane that Vetinari couldn't believe it. By the end of Thud!, he's a full fledged Lance-Constable Trainee, whom Vimes poached from Vetinari partially for his Crouching Moron, Hidden Badass qualities, and partially because the Watch needed a good paper pusher. Is also one of the few people who so impressed Vimes with his Hidden Depths that he's allowed to call him "Mister Vimes". As of Snuff, he puts his talents to work discovering the dirty laundry in other people's account books.

The longest-serving member of the Watch, Fred Colon is "one of nature's sergeants"; he has a trained street ear and can pick up rumors with amazing speed, and has many years of experience on the extremely mean streets. He's also touchingly loyal to Vimes. However, he's a fat old fool, none too brave and completely unsuited to the pressures of executive command.

The Watch's first forensics expert, Cheery was hired straight after being kicked out of the Guild of Alchemists for blowing it up even more spectacularly than usual. She promptly met Sergeant Angua, who, having a very good sense of smell, immediately knew she was female, something dwarfs Do Not Talk About. Cheery became one of the leaders in the dwarf feminist movement, respelling her name, wearing skirts, putting on makeup, and admitting that she really doesn't like beer that much. She's very competent but gets embarrassed when she has to yell at people, and as such Vimes doesn't promote her until she's been on the force for a while.

Sergeant Detritus
One of Discworld's great success stories, Detritus went from a splatter outside a pub ("like a bouncer, but trolls use more force") to a Sergeant in the City Watch charged with yelling at recruits until they behave. He's not too bright unless it's cold out, but can eventually reach a satisfactory conclusion given enough time. He carries a converted siege crossbow and wore elephant battle armor until they could find something better.
Corporal Cecil Wormsborough St. John "Nobby" Nobbs 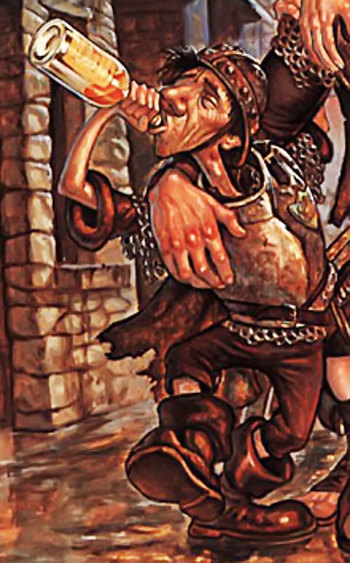 Despite his resemblance to a shaved chimpanzee with bad acne, and despite his many bad habits (including kleptomania, chain-smoking, and telling off-color jokes in mixed company), Nobby Nobbs has a skill for getting along with people; Commander Vimes suspects it has something to do with the "common denominator", as there's nobody more common than Nobby. He shares a strong camaraderie with Fred Colon, as well as street smarts, a fear of responsibility, and a belief in 'safe' policing (like keeping the peace in neighborhoods that have plenty of peace to keep, or guarding city landmarks from theft).

"The call to duty would not find him wanting. In fact, it wouldn't find him at all."
Advertisement:

The City Watch's resident zombie. Began as an "undead rights activist" before joining the Watch. Rather affable and upbeat about his status as an undead, and he approaches his service as a Watchman with the same passion he did social activism before and after his death (see Night Watch).

The resident golem on the City Watch. Taken on by Vimes partially because he wanted to piss off "the establishment". Currently is saving up his wages to buy other golems their freedom, and has a friendly but recurring argument with Constable Visit over religion.

A native of Omnia, Corporal Visit is the resident ultra-religious member of the watch. He and Dorfl disagree of the existence of God, but this is more of an intellectual dispute than heated rivalry, and he is generally one of the nicest and most moral members of the Watch. Vimes considers him an excellent copper (largely due to his abilities at keeping the peace)

The first gargoyle on the City Watch. Patient, loves pigeons (as food), and Vimes's ideal choice for prolonged stakeouts.

Unlike most Gnomes, Wee Mad Arthur found he was less interested in repairing shoes as he was in kicking ass and taking names. He has since found out about his true heritage (he's actually Nac Mac Feegle) and is all the happier for it.

Lady Ramkin (later just Lady Sybil) is a duchess, one of the richest women in the city of Ankh-Morpork, and wife of Commander Samuel Vimes. A hobbyist breeder of swamp dragons. Sybil is rather quiet, a good listener, and leans toward understatement. But like most Discworld characters, she's tougher (and smarter) than she looks. Her aristocratic birth is a source of mild frustration to Vimes, since he adores his wife, but can't stand being a duke or talking to most of her nobby rich friends.

Lady Sybil's bosom rose and fell like an empire.
Willikins

Sybil and Sam's butler. Seems like the stereotypical butler, but is capable of feats of stunning badassery.

The beloved son of Sir Samuel and Lady Sybil Vimes. Born at the end of Night Watch, and six years old by the time of Snuff.

A minor villain in Men At Arms, Captain Quirke is the commander of the Day Watch.