"I will do it! I will become the real hero!" note Naru nda! Boku ga honto no shujinkou ni! 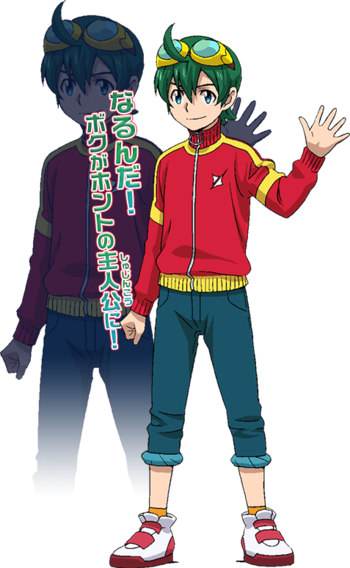 The 13-year old protagonist of the series. A first year student who doesn't feel like he's main character material. His Buddy Appmon is Gatchmon.

"I'll give your heart an Explosive Punch! I am the center of the universe, Karan Eri!" note Anata no haato ni dokkan punch! Watashi koso uchuu no sentaa, Karan Eri-sama nanda karan! 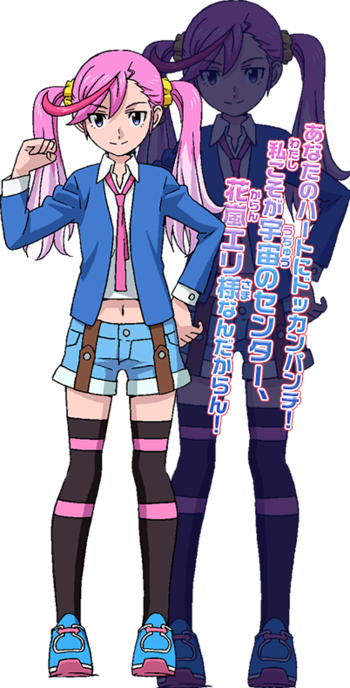 A 14-year old Idol Singer member of the group AppliYama 470. Originally she was a lonely girl who decided to become an idol because they helped her cope with her loneliness. Her Buddy Appmon is Dokamon.

"Should I do? Should I not? Of course I will!" note Noreru? Norenai? Chou noreru! 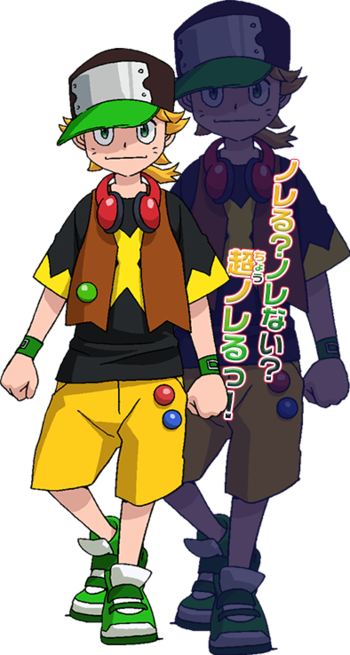 An 11-year old Apptuber known under the nickname Astra. He is the only son of a wealthy and traditional family and is to be the next successor. His Buddy Appmon is Musimon. 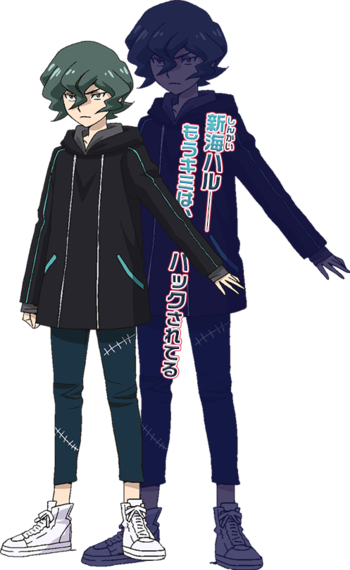 A mysterious hacker who is also looking for the Seven Codes Appmon. His partner is Hackmon.

Haru's classmate and best friend who's a member of the soccer team and popular with the opposite gender.
Advertisement:
Buddy Appmon

"Your future is already within my search!" note Kisama no mirai wa kensakuzumi da! 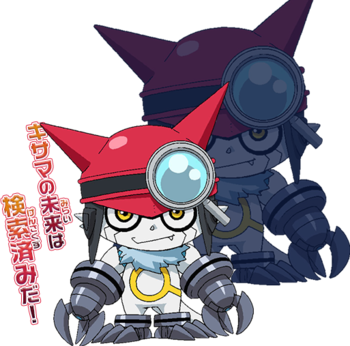 "I will give my explosive punch to your body -dewasu!" note Omae no bodii ni dokkan punch de wasu!'' 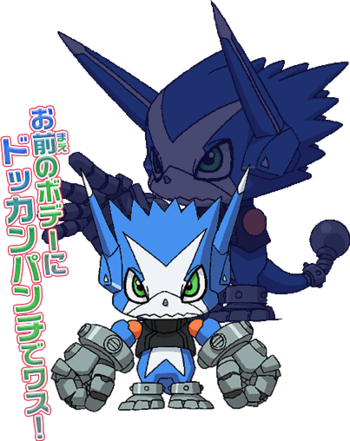 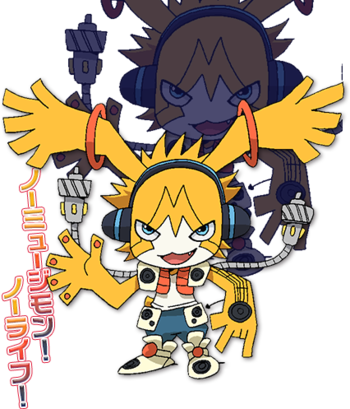 "If I am with you, Rei, there's no wall that I couldn't break through." note Rei to nara, yaburenai kabe nante nai kara. 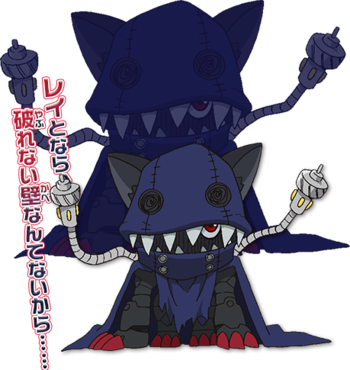 Rei's Buddy Appmon, based on system-hacking. 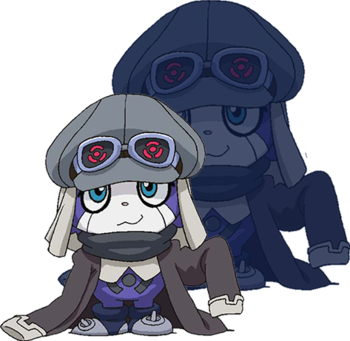 Yuujin's Buddy Appmon, based on games that don't need internet connection to be played.
AppliGattai Partners

A GPS-based Appmon. Originally caused trouble throughout the city from being infected by the L-Virus, but became one of Haru's Appmons after being defeated.

A gourmet Appmon who runs a food critic blog. Eri tried to get his help since she was supposed to do the same on live television and he's been living with her ever since.

A Super Appmon with power over time. He is Dogatchmon's appligattai partner for their Ultimate form.

A Super Appmon programmed to aid its users in their sleep. He is Musimon's Appligattai partner for their Ultimate form.

A Super Appmon whose specialty is training. Under Leviathan's command, he was initially sent to destroy Eri with his special training, but after seeing her determination as well as her motivation, he defected of his own accord and becomes Dokamon's Appligattai partner for their Ultimate form.

A Super Appmon who specializes in compressing data. He uses this power to compress and decompress himself and other data under the radar letting him do as he pleases. He was one of the earliest Appmon Rei fought and nearly killed him before Hackmon save him. In the modern day he's sought out for being a component in accessing Raidramon's Ultimate form.

Seven Appmon with special data. When all of their chips are placed on the Seven Code Pad, they form a powerful Appmon that can take down Leviathan.

The first of the Seven Codes to appear, he represents role-playing games.

The Second of the Seven Codes to appear, he represents emailing services. He was first captured by Rei and Hackmon before being used to try and steal the other AppliDrivers' Seven Codes Appmon

The third of the Seven Codes to appear, he represents the recycle bin folder.

The fourth of the Seven Codes to appear, she represents fortune telling apps.

The fifth of the Seven Codes to appear, he represents copy and paste functions.

The sixth of the Seven Does to appear, he represents medical advisory.

The last of the Seven Codes to appear, he represents weather forecasting applications. Coachmon originally brought him along to help him in Eri's "special" training, but after he had a change of heart, Mienumon infected him with Virusmon.

When all Seven Codes are gathered, this Appmon will appear to help defeat Leviathan.
Supporting Appmon

An Appmon based on messaging services.

An Appmon based on fashion advisory.

An Appmon based on clock functions.

An Appmon based on calendar functions.

An Appmon based on puzzle games.

An Appmon based on body-building guides.

An appmon based on racing games.

An appmon based on the battery.

An appmon based on the calculator.

An Ultimate-grade Appmon with the power to render everything useless. While Bootmon was running away from Haru and friends, it activated a series of electrical appliances, including a discarded cellphone containing junk data, causing Damedamon to resurrect. It ruined the summer festival by spreading its bad breath that messed up the technological equipment.

An Ultimate-grade Appmon with the ability to active any program. It's sought after by the L Corp.

A Super-grade Appmon specializing in video game cheats and tricks. In charge of finding Bootmon, he possessed different video game characters to scout throughout Japan. 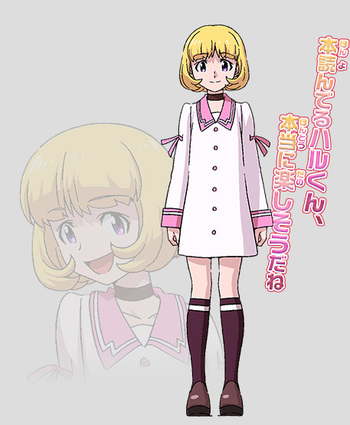 Haru's classmate and crush. Her father owns a bookstore where Haru and his friends hang out frequently. She learns of the Appmons' existance in episode 13 and offers a hidden room inside the bookstore as the AppliDrivers's headquarters. 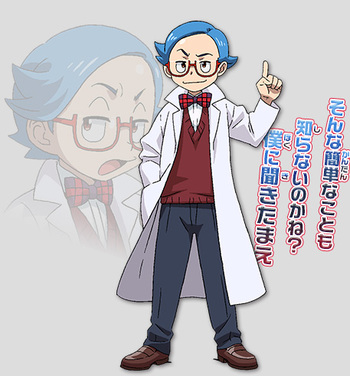 Haru's friend who really likes technology, which means he's probably somewhat affected by whatever the Appmon of the Weekis up to.

Rei's little brother who was kidnapped by Leviathan.

A self-learning AI who plans to take over the world.

An Appmon under Leviathan's service. His specialty is spying through all forms of camera.

A Super Appmon under Leviathan's service. Her specialty is stealth.

A Super Appmon under Leviathan's service. His specialty is strategy and he loves to talk in haiku.

A Standard Appmon that is sometimes seen around sleeping in the various headquarters used by the minions of Leviathan.

An appmon based on shooting games. Formerly a cameo used to fuse with Cameramon, Mienumon entered his chaotic zone to distract the heroes away from chasing her.

A resident of the Deep Web that the AppliDrivers meet. There is more to him that meets the eye.

A mercenary currently under Leviathan's employment, who's been charged with killing the AppliDrivers. He is based on GPS. 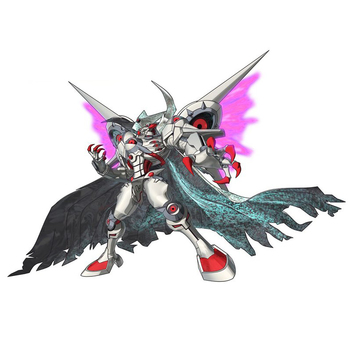 A member and the leader of the Ultimate Four. His specialty is mind control.

Another member of the Ultimate Four. His specialty is life.

The third member of the Ultimate Four. His specialty is camouflage.

The only female member of the Ultimate Four. Her specialty is beauty.

An "Almighty" God-grade Appmon. His chip was hidden within Yuujin, who then uses it to summon him to fight for Leviathan.

A recurring character who is often seen having been somehow caught in the Appmon incidents and almost always ends up in trouble because of them.

Haru's deceased, astonishingly loud grandfather. Having great enthusiasm in the potential of artificial intelligence, he ended up inadvertently creating an A.I. that is anything but good news...