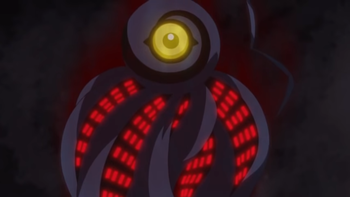 An enigmatic digital being that dwells within the Network and has some connection to the actions of the forces of darkness, but only rarely intervenes. It exists as a counterbalance the Digital World's endless potential for life and growth and to that end, it has been working behind the scenes for the entirety of the series to bring about a Great Catastrophe.

Its Evolutions are as follows: 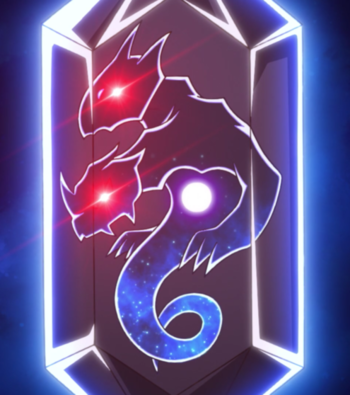 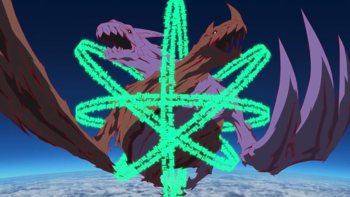 ZeedMillenniumon, The God of Evil

A dark crystal used by the forces of darkness to evolve Digimon to higher levels. Its true form is the twisting, two-headed dragon within the crystal. Once known as Millenniumon, it tried to destroy the Digital World, only to be stopped by the combined forces of the previous incarnations of the Chosen Children’s Digimon, its parts scattered across the world. However, darkness from the human world seeped into the digital one and began to awaken it's fragments. It seeks to have Darkness cause more discord in the human world to fully awaken.

Voiced by: Hisao Egawa
An ogre-like Digimon that serves as a lieutenant to Devimon and leads his efforts to eliminate the Chosen Children. He eventually meets his supposed end against MetalTyranomon, having turned face and helped the kids escape. 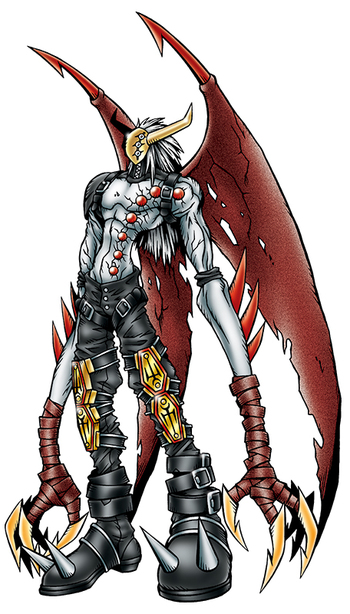 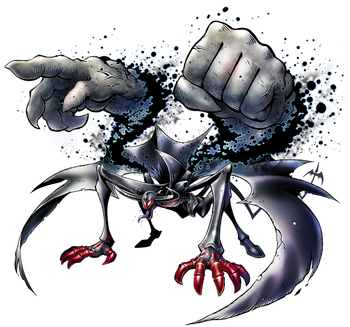 A demonic and dreaded Digimon who's out to destroy the children so that he can conquer both worlds. He has an incredible clout in the Digital World, with the capability of sending out Digimon that can ravage entire continents as though they are expendable mooks. He serves the main antagonist of the Holy Digimon Arc.

His Evolutions are as follows:
SkullKnightmon

Voiced by: Mie Sonozaki
A small and speedy Digimon with the appearance of a knight in skull-themed black armor who serves Devimon, or more practically, the Dark Crystal.

Their Evolutions are as follows:
MarinDevimon

An aquatic variant of Devimon who commanded attacks on MarineAngemon's underwater city, they attempted to recorrupt Tailmon into DarkKnightmon.
Advertisement:
Mephismon

Voiced by: Yasuhiro Takato
A group of alien-like Digimon who worship the Dark Crystal.
Soundbirdmon

A number of winged, spherical Digimon capable of controlling other Digimon via sound. They act as commanders of a sort to various hostile Digimon.
Deathmon

Voiced by: Volcano Ota
The Soundbirdmon horde's true form. A large, cyclopean Digimon that led the forces of darkness in battle during the ancient war.

A horde of Digimon that spread like a virus, causing disruptions all around Tokyo, and later, the world. The Algomon first appear in their easily dispatched baby forms, before one evolves into its more powerful Champion form, providing the first serious test for Taichi And Agumon. Later, more Algomon are seen causing a cyber attack in the United States. Even later, some Algomon directly ambush Taichi and Agumon to test them.

Their Evolutions are as follows:
Eyesmon 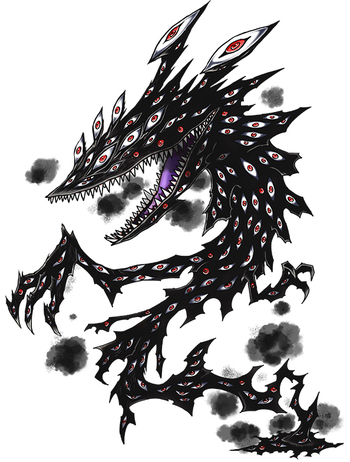 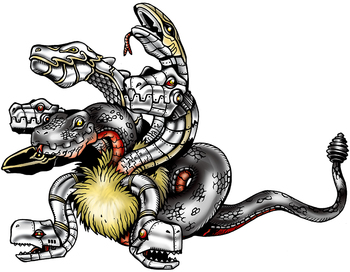 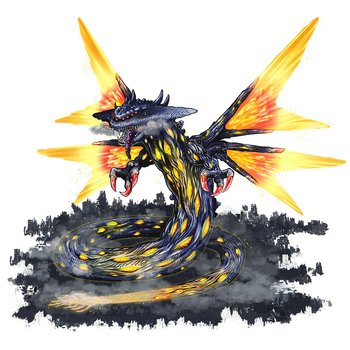 A bizarre dinosaur/dragon-like Digimon with many eyes on its entire body, Eyesmon created a virtual Tokyo based on data gathered from the real locale. Despite being beaten, Eyesmon manages to Digi-volve into Orochimon near death, a massive, eight-headed snake monster. And when he's defeated yet again, he is empowered by the Dark Crystal to become Nidhoggmon, a city-sized serpentine abomination set to destroy Tokyo in a blast by overloading its technology with his energy.

A mermaid-like Digimon whose lower body resembles a squid. She attacks the data of several tanker ships in Singapore in order to send it to Devimon while flanked by a swarm of Algomon's Baby I form.
Zurumon

A yellow blob-like Digimon that appears in massive swarms. They attack the data of spacecraft and satellites in order to send dark energy to the Digital World.

The Army of Darkness

A Cyborg Digimon that's working under Devimon, and implied to be the evolution of the previously fought DarkTyrannomon that guarded a fortress.
Andromon

An incredibly massive Digimon that's a mix of a bee, a mecha, and a fortress, where the Waspmon hordes are launched from, and also where their victims are stored.
Kuwagamon and Okuwamon

Ferocious red stag beetle Digimon found by the Chosen Children. They are lead by an Oukuwamon, a larger grey Kuwagamon with greater power.
Mammon

A hulking mammoth Digimon that attacks Yamato's group along with several Yukidarumon.
Velgrmon

An ancient and colossal avian Digimon that consumes the dead and is immensely powerful for being a Ultimate levelnote It's a Beast Spirit in the series it debuted in, but Beast Spirit is treated as equal to Ultimate in the franchise. It serve Devimon closely and is an example of how powerful Devimon's influence is.
DarkMaildramon

A large dragon with tattered red wings wearing blackened armour that resembles a knights, it serves as SkullKnightmon's personal steed, carrying them wherever its master wishes.
Splashmon

A massive tiger-like Digimon made of water that stands guard in the corrupted ponds outside Devimon's fortress. As it's made of the pond's water, it can flow around attacks and spread the miasma. It's actually called Splashmon Darkness Mode in the broader franchise lore.
Sephirotmon

A Digimon composed of ten round bodies. Each body can capture Digimon, copy their data, and either use whatever attacks they learned or give what they learned to someone else.Its Evolutions are as follows:
Mugendramon

A mechanical dragon Digimon created from the data of several other Digimon. The Vademon created it to help with giving a body to Millenniumon.
Griffomon

A pink, blobbish creature that invades the Tree of Information that houses the crests. It invaded the place in order to assimilate any knowledge that the tree housed.
GranKuwagamon

A massive insect Digimon used by the controlled Nanomon to fight Koshiro and Tentomon. It's eventually defeated by HerakleKabuterimon.

A giant bird-like Digimon. After Tankdramon was defeated, it took over leading the army of Allomon and Megadramon to attack the peaceful forest Digimon. Taichi and Agumon took it upon themselves to keep Parrotmon and his army occupied while Sora and Piyomon led the forest Digimon to safety. However, it is soon blessed by the Dark Crystal and evolves into the golden knight known as Crossmon.

His Evolutions are as follows:
Bakemon

An army of ghostly Digimon empowered by the Dark Crystal to stop Taichi and Sora. Several evolve to the more skeletal MetalPhantomon and one of those evolves to Gokumon.

Their Evolutions are as follows:
Ebidramon

An crustacean-like dragon living in the ocean, after attacking the Chosen Children, MarinDevimon evolved it into Gusokumon to make the battle harder for them.

Their Evolutions are as follows:
Raremon

An undead Digimon that's encountered in Gerbemon's junk pile. It eats garbage and fellow Digimon, and is responsible for most of the Tyumons' deaths.

It's evolutions are as follows:

A squid Digimon found by the Chosen Children in the strait towards the Cloud Continent.
Seadramon

A large draconic sea serpent race of Digimon that live in very hostile oceans, constantly preying on any Digimon that aren't other Seadramon. They follow a very basic instinct to evolve into stronger forms and become top predators.

A reptilian cyborg Digimon that leads a small army of Allomon and Megadramon in attacking and consuming the Digimon that live in a forest on the Cloud Continent.
Vegimon

A pack of large, wolf-like Digimon that attack Takeru in an open plain, turning against Taichi and Sora when they rescue him. They are led by a Cerberumon.
Cerberumon

A massive, three-headed canine Digimon that leads a pack of Fangmon in attacking Taichi, Sora, and Takeru. It is stronger than any one of the heroes' Ultimate-level Digimon.
BladeKuwagamon

A group of Insect-type Machine Digimon whose entire body has been weaponized and turned into Chrome Digizoid. They were led by MetallifeKuwagamon, and evolved to adapt to the conditions of the pillar of light.
MetallifeKuwagamon

A humanoid subspecies of Kuwagamon which rapidly boosted its offensive power by means of armification. It leads the BladeKuwagamon who live on the pillar of light.
Tropiamon

A massive and fierce Plant Digimon capable of flying. It invades Pomumon's floating island and turns Pomumon into fruits, which it then eats when the fruit turned ripe.
Flymon

A gigantic bee-like Digimon. Initially appearing only as random background Digimon, the species later on shows up as enemies alongside Tropiamon.
Opossummon

A small rodent Digimon that floats with the help of balloons. It presents itself as a friendly individual...but it’s just a trick. In truth, Oppussummon lures young Digimon to the park, then captures them with balloon monsters and feeds them to Monzaemon to power it up.

The mascot of a theme park, Monzaemon is secretly Opossummon’s weapon to feed the energy of young Digimon.

An Ultimate level Digimon rock star and entertainer, he challenges the Chosen Children in order to become the King of Digimon. Shares rivalry with Volcamon.

Voiced by: Volcano Ota
A muscular Ultimate level cyborg Digimon who loves music and exercise, he challenges the Chosen Children in order to become the King of Digimon. Shares rivalry with Etemon.
Entmon

A massive Ultimate level plant Digimon whose body is made up of dead trees, and long time enemy to Petaldramon.
Parasimon

A Mega level parasite Digimon that had attached itself to Machmon long before the Chosen Children met the latter.
Gaossmon and Tyranomon

A couple of antagonistic sworn brothers fighting for water in the wasteland. Gaossmon is a tiny blue t-rex head on legs, and Tyranomon is a full-on t-rex body. Their group had captured Joe prior to the episode's start.
Minidekachimon and Atamadekachimon

A duo consisting of a t-rex with a giant head, and a smaller t-rex living inside its mouth. They lead one of the villain groups fighting for water in the wasteland, having captured Gomamon before the start of the episode.
Giromon and Boarmon

Giromon are a group of machine Digimon that attack in groups. They're fought in the wasteland by MetalGreymon and Rebellimon. They also ride several Boarmon, which are giant fire-wielding boars.
Boltmon

A Frankenstein's Monster-styled Digimon that inhabits the wasteland area. Rebellimon had lost to it once.
Zanbamon

A demon general fused with a horse. Long ago, it battled a gold warrior wielding a blade of light. The gold warrior was victorious, sealing Zanbamon. However, Zanbamon eventually escaped, destroying and menacing nearby villages.
Soulmon

A massive horde of ghostly Digimon that have taken up residence in Petaldramon's forest. They hate life and are trying to keep the DigiEggs that appear there from hatching. They arew led by a SkullBaluchimon.
SkullBaluchimon

An enormous fossil beast that hates all that lives. It spreads cold throughout Petaldramon's forest in hopes of keeping the DigiEggs there from hatching.

Its Evolutions are as follows: