"We can't stop now, we'll never get a chance like this again!"

Davis is the designated leader of the new Digidestined/Chosen Children; brash, cheerful, and energetic. He's also Tai's Suspiciously Similar Substitute, to the point of wearing the former's trademark goggles. Although he's very much an underdog at first, he's about the only cast member who doesn't have mild-to-serious psychological issues. This emotional stability ends up being his greatest asset. He has a hopeless crush on Kari, but gradually idolizes her less as time goes on.

In the conclusion of 02, he becomes a noodle cart owner. 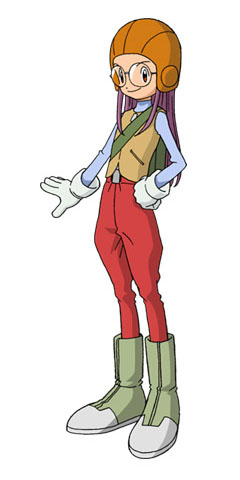 Yolei is an enthusiastic girl with a knack for being technologically savvy and a big heart. Has two big sisters and a big brother that she feels hog the spotlight. Notably, she is the only known Chosen Child in this series to have a Digimon of the opposite gender.

In the conclusion of 02, she marries Ken and they have three children. External sources imply she is on maternity leave, but what she does for a living is unclear.

Iori is the youngest and most reserved of the new team, rather quiet and rigid compared to the others. He was raised in a rather traditional home, and his father and grandfather were both police officers, so he is very polite and possesses a strong sense of justice. He practices kendo under his quirky, yet wise, grandfather.

In the conclusion of 02, he becomes a defense attorney.

"I know I can never be forgiven for what I've done... I'll atone for my own sins."

Ken after realizing the Digital World isn't a video game, and having to face up to all the evil stuff he's done (and with the Dark Spore suppressed). Ridden with guilt and sorrow, he works hard to try and clean up his act, but perhaps will never completely get over it. Thankfully, Daisuke and Wormmon seem pretty determined to help him reform.

In the conclusion of 02, he marries Miyako and becomes a police detective.