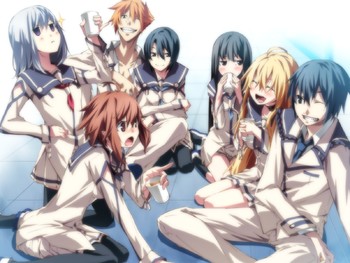 This is the character page for the main protagonists of Dies Irae, made of Ren Fujii and his relatively small circle of friends. It also includes LDO member Kei Sakurai, being one of the main heroines.

Beware of unmarked spoilers. Be careful from now on.

"If you could just get back whatever you've lost right away, wouldn't that make it worthless to begin with?"

A lone wolf lacking in sociality. He may appear rather mature for his age, but is fast to lose his cool when complimented over his effeminate features - a trait that became somewhat of a complex for him. While normally agreeable with others, he draws a clear line between himself and the rest of his schoolmates, with the exception of a few close friends.

Unfortunately, about two months prior, a brutal fight inexplicably broke out between him and Shirou Yusa - his best friend - that left both of them hospitalized, placing Ren's already fickle reputation at school in complete jeopardy.

Following some events he comes into possession of Bois De Justice, the guillotine from the French revolution. Containing the soul of Marguerite Breuilh, this Ahnenerbe allows Ren to harness her curse to decapitate anyone whose neck makes contact with its blade, regardless of regeneration or immortality.

"Men that keep yapping on about shit at the sidelines while women do all the fighting can go to hell."

Ren's best friend since childhood. He is a genius skilled in all sorts of fields, but as a result, he finds life boring. As a constant thrill-seeker, he acts recklessly and even incited a brutal fight with Ren, ultimately breaking off their friendship. As a result, he vanished from school and has not been heard from since.

"Praying to a cross is about as messed up as praying to a guillotine or an electric chair."

Daughter of a prestigious hospital's director and Shirou's partner in crime, the two met while Shirou was being treated at a hospital and planned to bust Shirou out before Ren woke up. She goes by the name Ellie to distance herself from her daylife. She is quick on her feet, possess a broad range of knowledge, and is brilliant both in brains and brawn. She resembles Shirou in that her self-destructive tendencies end up endangering those who keep her company.

Her sole joy lies in sharing in that transient excitement with Shirou. Although she realizes that kind of life might send her to an early grave she does not appear to care in the slightest

"You always make that face when you're hiding something from me."

The head of the Kendo Club. Unyielding and masculine, she and Ren share a rather masochistic relationship. Unlike the infamous Ren, Kasumi is cheerful and sociable, her fame further amplified by her national-level fencing skills. She has a generally rough personality, but when it comes to Ren, she's prone to worrying and being fussy. She has a tendency to try and act the older sister from time to time, but she neither looks, nor feels the part.

"Don't you think God can be more than a little cruel sometimes? I'll make sure to throw Him a sucker punch for you next time I see Him."

Ren's upperclassman. Just as popular as Kasumi. But while Kasumi's popularity can be categorized as more or less conventional, Rea is idolized by those of more peculiar tastes, as - just like Ren - she normally tends to keep her distance from those around her.

She exudes an aura of aloofness, her well-ordered features of mixed German and Japanese blood rarely betraying emotion. However, despite that initial impression, she is hardly the type to be cold to others. An "eccentric weirdo" might be a more apt way to describe her, all things considered. Incidentally, her home is also a church.

As a Sonnenkind, she acts as the heart of the Swastika which is also her Ahnenerbe. 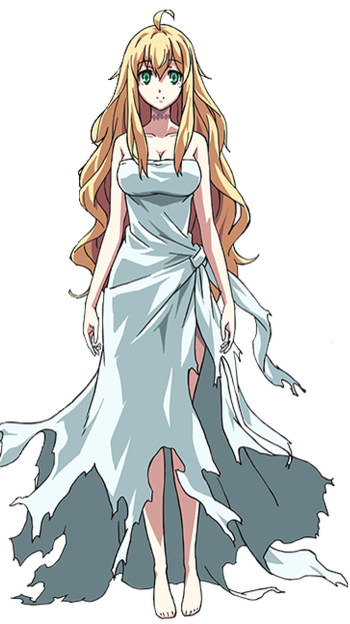 A mysterious girl who appears in Ren's dreams. She is clearly not Japanese, but her background and true name are unknown. For all we know, she might be just a figment of the young man's imagination. A maiden of the twilight, she sings a loathed refrain with a pure, angelic smile. Could that scar across her neck have been left by a guillotine?