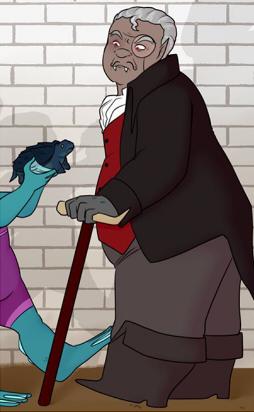 Played By: Leon Thomas
"What are you doing in there, you busy little sausage?"
Viscount Bumbershoot Von Victrola is a Lawful Evil vampire from the land of Fangsylvania who has lost sight of his sire, Count Danto.
Rolen Hawklight 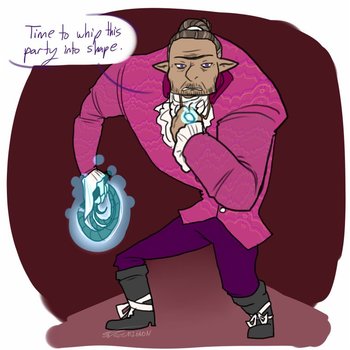 Played By: Skitch
"It's not going to make more sense until it makes less sense at first."

Rolen Hawklight is a half-elven lawful good justiciar, raised in the Nynsun Chapel, who was a knight of the Order of the Merciful Sword, until he refused some rather unmerciful orders and was thrown out as a result. He wandered out on his own, looking for redemption, ending up in Ilium. 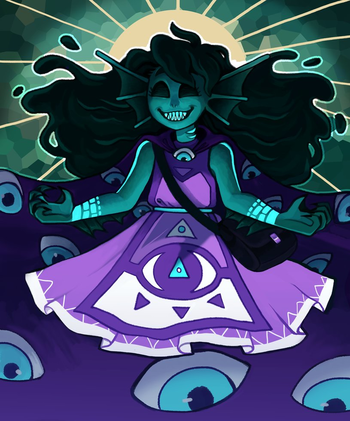 Dora is a chaotic neutral Nixie from the Feywild, who was sought out by the God Ghaunadaur for a special assignment in Ilium. 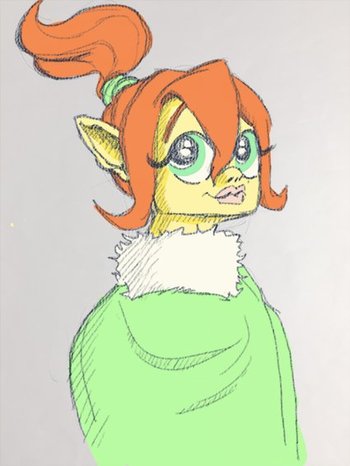 Played By: Chris Larios
"So... you guys aren't a restaurant?"

Zoey is a 19/7 year old neutral good runaway trying to become the very best magic user that ever was, and heads into Ilium hoping to find something new. 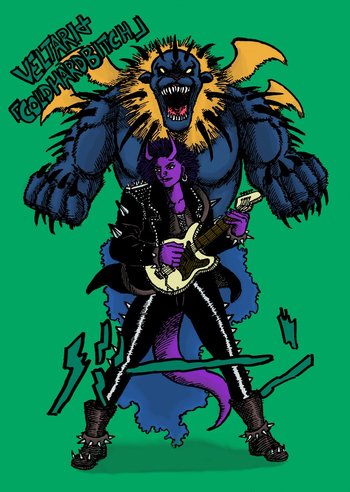 Played By: Laura Kate Dale
"This is great. This is great! Wonderful! I get here too late, Bumbershoot's already gone, and I'm now stuck in the city where it always rains."

Veltari is a Tiefling bard, who first appears in episode 9 taking an assignment from Count Danto to retrieve his sire Bumbershoot, or bring back the heads of those who may have harmed him.

Winifred
A phlumph who serves as secretary to the Avant Guards.

Lady Nim
The fiendish head of the Lilies
Claire-Elise Legrand
A double of Zoey's created through wild magic, whom she has a tumultuous relationship with.
Carrie King
An employee of Lady Nim's, who is in all probability having a bad day.
Penny
A purveyor of peculiar items who is involved in various operations of extortion and exploitation

Lyra
An enforcer for Penny who winds up the victim of a murder that the Avant Guards are hired to investigate.

Alice Hawthorne
An old lady who keeps a household of skeletons for sole company since the death of her husband Max.
The Rocs
The Rocs are both researchers, who happen to be rival bounty hunters to the Avant Guards.
Garic The Great
An enigmatic masked figure who no one seems to know of in Ilium.
Asriel
A prisoner for murder, in captivity in the mirror held by Warden Light.
Wulf
A farmer troll with a link to the mysterious Garic.
Ishmael
Ishmael is a friendly stone giant who takes various contracts with other Ilium inhabitants.
Sylvia Belle
A Shadar-kai witch residing in Ilium, who aids the Avant Guards in their investigation of the robbery.
Ghaunadaur
The god of abominations himself.

Warden Light
An angel dedicated to the Triad who entered Ilium long ago, he offers bounties for the capture and delivery of select wrongdoers, rarely interfering with the Lilies gang.
Lucas Rosemary
A gnomish inventor who helped design the mirror prison.
Grace
Warden Light and Lucas Rosemary's sheltered but brilliant Aasimar teenage daughter.
Mardis Valamin
Mardis Valamin, son of the Archmage Alias, who once pursued Warden Light and his uncle Lucas Rosemary in the mistaken belief this the latter had been kidnapped for trade secrets.

Mara Sleydon is the last remaining member of the Scales of Justice, outside of Rolen himself.
Zariel
Lady Nim's superior, an Archdemon commanding the forces of hell.
Iris
A mysterious elf employed in the medical care of the blood farming subjects.
Cyldiel Valamin

Oghma
The God of Knowledge himself.