This page lists tropes related to heroes who appear in the classic Devil May Cry continuity.

"I dress to impress!"
Click here to see her DMC 4 self

A mysterious woman with lightning powers, Super Strength, and a striking resemblance to Dante's deceased mother who hired Dante to stop Mundus in the first Devil May Cry.

It is eventually revealed in that game that Trish is actually a demon made by Mundus to kill Dante. However, after multiple failed attempts, Mundus decides to use her as bait for Dante instead, only for Trish to betray her master and together with Dante seal the demon lord away for good.

Her moveset in 4SE has her use the Devil Sword Sparda. Trish can toss Sparda out and leave it spinning in mid-air, upon which she results to simply beating her enemies to death with lightning-enhanced martial arts. Her ranged weapons are the twin handguns Luce and Ombra, and she later gains Pandora as well. Her main advantage is that a lot of her moves set up area-of-effect attacks to continually damage enemies, and most of her martial arts moves leave lightning trails behind her as she attacks. The result is that while Trish doesn't do a whole lot of damage on her own, she fills the playable arena with tons of stuff for enemies to take damage from- and that damage certainly adds up.
Lucia 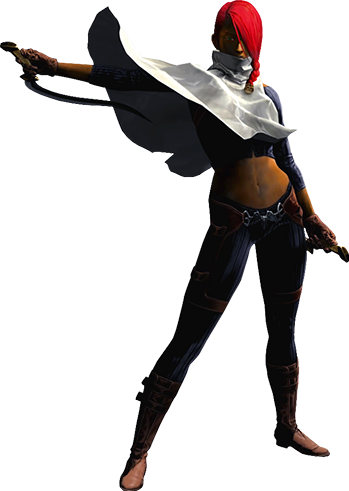 "Till next time, son of Sparda."
"Dante told me... devils never cry!"
Voiced by: Françoise Gralewski

A red-haired woman raised by the island of Vie de Marli's Clan of demon-human hybrid warriors. She protects the island from demons and helps Dante fight a Corrupt Corporate Executive named Arius who's trying to open a Hell Gate in Devil May Cry 2. She uses an array of throwing knives and daggers in combat, along with the ability to transform into a white birdlike demon.

She is eventually revealed to be a defective artificial demon created by Arius. However, after a Heroic BSoD where she pleads for Dante to kill her out of fear she'll turn against the very people she wants to protect, and a Get A Hold Of Yourself Man from the leader of her clan, she decides she is a hero regardless. When Dante goes through the Hell Gate to fight Bigger Bad Argosax in the climax, Lucia stays behind to kill a deformed, possessed Arius.

At the end of Devil Mary Cry 2 she is last seen in Dante's office, waiting for him to return, but returns briefly in the prequel light novel of 5, to assist Dante on the island against a new threat.
Lady

"Date a demon? I'm not that desperate!"
Click here to see her DMC 4 self 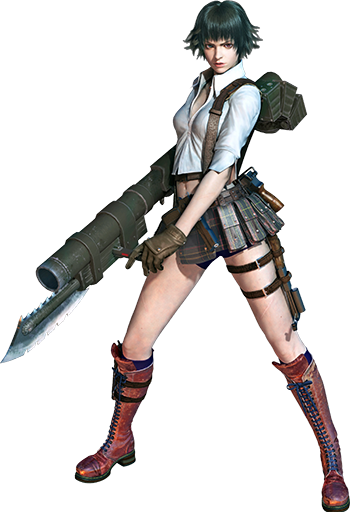 A Badass Normal demon slayer formerly known as Mary who first meets Dante in Devil May Cry 3. Her current name came from Dante's penchant to just call her "Lady" after she refused to introduce herself in that game.

In 3, she seeks to kill her demon-worshiping father Arkham as revenge for Arkham murdering her mother years earlier, only to turn out to unwittingly be part of the key to Arkham and Vergil opening a Hell Gate. At climax of the game, she is finally able to kill her father and together with Dante seal the Hell Gate he opened for good. Afterwards, she continues her work as a demon hunter, and eventually hires Dante to investigate the Order of the Sword in 4.

Being a normal human who lacks demonic powers or brute strength, Lady employs Gun Fu and a Hyperspace Arsenal of weapons in battle instead, including a pistol & a submachine gun (a Custom Browning Hi-Power/CZ 75B Hybrid and a custom Vz.61 Skorpion with a bayonet attached to it) , throwing knives, grenades, and her custom rocket launcher "Kalina Ann." She becomes playable in 4SE, putting all of these weapons to good effect, and trades out her handgun, submachine gun and knives for a pair of high-caliber handguns. Lady has limited fighting ability due to being a normal human, but can still keep up due to her guns putting out a surprising amount of damage. Indeed, firearms are mostly combo tools in Devil May Cry games rather than substitutes for your sword, but for Lady most of her damage and style points come from said firearms. Her DT is also a powerful, room-clearing shower of grenades rather than a transformation. While this does a huge amount of damage, it also means she can't heal, which incentives she stay at a distance and pelt away at her foes from safety.