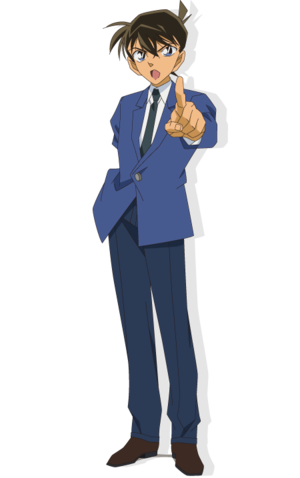 "Only one truth is revealed, the appearance of a child, the brains of an adult, I am the great Detective Conan!"

being the the "era" of Japanese history when the series started), seventeen-year old Shinichi was well-known throughout the Beika District of Tokyo and beyond for being able to solve any crime that the police failed to. However, he was still a teenager, and susceptible to things such as... oh, falling in love with his childhood friend Ran.

One day, after solving a murder at an amusement park, Shinichi comes upon a mysterious man in black extorting money from another man. While he's investigating, however, he fails to see the man's partner sneak up on him and knock him out cold with a metal pipe. Deciding that He Knows Too Much, the two force-feed him a poison pill supposed to not only kill him, but leave no trace behind besides "evidence of a spontaneous heart attack". Unfortunately for them, it fails to do the former, and only half-accomplishes the latter: Shinichi has been shrunk into a six-year old.

One quick visit to his neighbor Professor Agasa's house later, Shinichi realizes that he must keep his identity secret, lest the two men in black come back and kill him for good. He is adopted by Ran, and now lives at the Mouri Detective agency, much to his (at first) dismay. Every once in a while, he has picked up leads on the two men in black, but in the meantime... murders, thefts, and kidnappings are popping up all around, and what better way to pass the time than to solve them all?

Mandatory naming note: "Shin'ichi" has various possible spellings - the one used here is 'new one', possibly referring to his being the 'Holmes of the Twentieth Century/New Era', but may also be a reference to the Japanese writer Shinichi Hoshi

. "Kudo" came from Shunsaku Kudo of Tantei Monogatari. There's also another possible explanation: his name could be a pun on 'one truth', because the 'shin' of Shinichi can be read as the character for 'truth' or the character for 'new'.